¡Viva!, the only festival of Spanish and Latin American cinema in the UK, begins its three week residency at Cornerhouse this Saturday. In a departure from previous years’ programming, thematic strands have been abandoned, after parties jettisoned in favour of Spanish-language cafe discussions and emphasis firmly placed on the new. The results look promising. 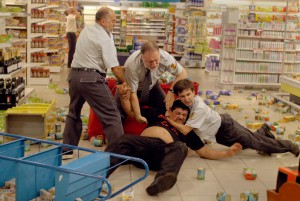 The subtle but potentially significant repackaging of the festival is in keeping with the shifting emphasis discernable at Cornerhouse over the past year. While the cinema’s new general approach to programming and scheduling has been seen as cynically populist by some commentators, ¡Viva! at least seems keen to take risks. Emphasis has been placed on previews and young directors and the programme feels fresh.

The festival’s duration has also been extended, allowing normal programming to continue while offering multiple screenings of slightly fewer films. Certainly, the quality and range of festival screenings deserves to meet a wide audience and this improved attention to accessibility should work in the festival’s favour.

There are some real coups in the line-up, not least within the Previews strand. La teta asustada (Milk of Sorrow) is a Peruvian / Spanish production already nominated for the Best Foreign Language Oscar. Leonera (Lion’s Den) has received high acclaim on the festival circuit and the prison-set drama is due for a general release at the end of the month. Plan B is another Argentinean, gay-interest film previewed here.

While there are no retrospective strands as in previous years, three programmes unearth films from the archive for special treatment. Early shorts from pioneer of Spanish cinema Segundo de Chomon are to be screened with live musical accompaniment from experimental rock bank Die Kunst on 22 March. On Thursday 25 March, Manuel Gutiérrez Aragón will introduce one of his own films and be present for a Q&A session after. Luis Arambilet, an experiemental digital artist from the Dominican Republic will also introduce a selection of his own work on Thursday 18.

Spanish speakers of all ages and abilities will undoubtedly congregate around Cornerhouse throughout the festival and the informal ‘cafe’ discussions and events held there are likely to compliment the festival atmosphere. There will be much to discuss.

MULE will be providing coverage throughout – check back soon for news and reviews!