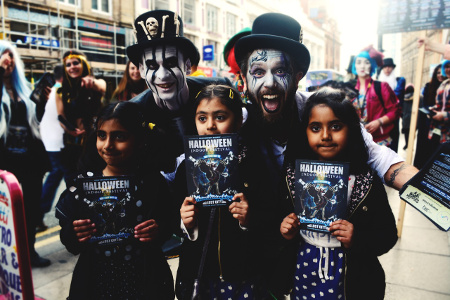 A heavy mist suddenly falls on a darkened Manchester hiding from sight unspeakably hideous creatures. Drums can be heard in the distance lulling you into a hypnotic trance, the work of witches and demons no doubt. Or perhaps voodoo ring masters, descending onto the city streets armed with psychedelic beats banged out by their armies of musical Goblins possessed with the desire for mischief and fun. It must be that time of year again; it can only be the Illuminaughty Halloween party.

Manchester’s Piccadilly Gardens were treated to an unusual spectacle of friendly chaos last Saturday as a hoard on Goblins, Voodoo ringmasters and a whole host of other bizarre creatures descended upon the city centre in advance of what they describe as a ‘huge Halloween extravaganza’. The organisers of a full scale indoor festival have been pulling out all the stops to promote their event, and you could be joining them by entering the competition below.

The party will feature a cross section of DJs and artist from the worlds of Psy Trance, Drum and Bass, Breaks and more. There will also be a host of circus performers, dancers, visual artists, street food traders and an outdoor fairground to keep the party goers entertained.

IIlluminaughty has been providing a truly authentic Halloween experience to Manchester’s residents by showcasing a vast array of alternative music that is impossible to find on such a scale anywhere in Northern England. Being described as ‘the friendliest crowd in Manchester’ it is no surprise that the night is in its 10th year of success. 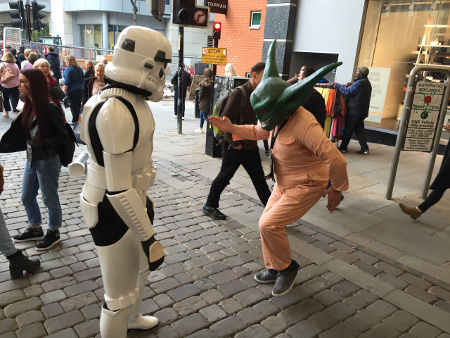 Chris Peet was hypnotised by the Goblins several years ago when he became entranced by the night’s unique features:

“The best thing is the atmosphere, everything is dolled up to the nines, the place looks amazing, beautiful and surreal. The people are all friendly, fun and dressed to impress ,or sometimes confuse; and the DJs and performers are all out of this world. It comes together to create this immersive other reality that lets you forget about the “real” world and gets you into that mischievous party mood. An epic experience like nothing you’ve ever seen, heard or felt before .”

IllumiNaughty, Lost City takes place on October the 31st at Bowlers Exhibition Centre in Trafford and will run from 7pm until 5am with an after party that runs from 5am until 9am.

The Mule has two tickets to give away to this fearful festival. All you have to do is like and share this article on Facebook! We will inform you by email and your names will be added to the Illuminaughty guest list. Good luck.