Science Slam: a synergy of science and poetry transcends expectations 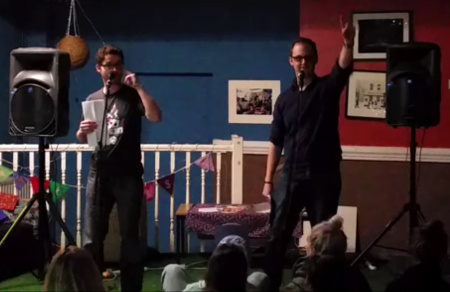 From left: Kieren King & Tim Walton performing at the Slam

Poetry and science are two things generally not associated with each other, in fact if you joined the two in a word association test you would be one step closer to a chemical cosh and your very own padded cell. However the audience attending the Science Slam at the packed out Nexus Art Cafe Thursday night will never again doubt the validity of the two pursuits being combined; though I can’t rule out they may end up bouncing of the walls of a padded cell at some time in the future.

The Science Slam was one of many events on the first day of the Manchester Science Festival, which runs until the 1st of November at venues across Greater Manchester. The experimental collaboration was thought up by Dr Sam Illingworth and Mr Dan Simpson who also performed at and hosted the event on the night.

Video highlights of the Science Slam

Simpson, the poet of the duo who also writes about science, described how he and Illingworth had thought up the event:

“Originally it was going to be what a slam is, which is poets and scientists doing three minutes of material, having scores at the end and the highest score wins. But as we chatted more we realised that wasn’t the best way to do it, putting science and poetry against each other, so we decided to get them to collaborate.” This resulted in the evenings format of 5 local poets teamed up with a scientist each to create and perform 5 unique pieces on the night.

Illingworth, a Lecturer in Science Communication at Manchester Metropolitan University was extremely pleased with how the show had been created, performed and received. “It wasn’t the poetry of science, it wasn’t the science of poetry, it was genuinely something interdisciplinary and it was amazing. I loved it, the audience loved it, and I feel incredibly privileged to have worked with such an incredible group of people.”