Review: Richard Herring’s ‘Christ on a Bike – the Second Coming’ at the Frog and Bucket

Following his critically acclaimed Hitler Moustache Richard Herring resurrects his Christ on a Bike show from 2001. As ever Herring’s performance is sharp, witty and intelligent, and was warmly received by a full house at the Frog and Bucket on Tuesday 26 October. 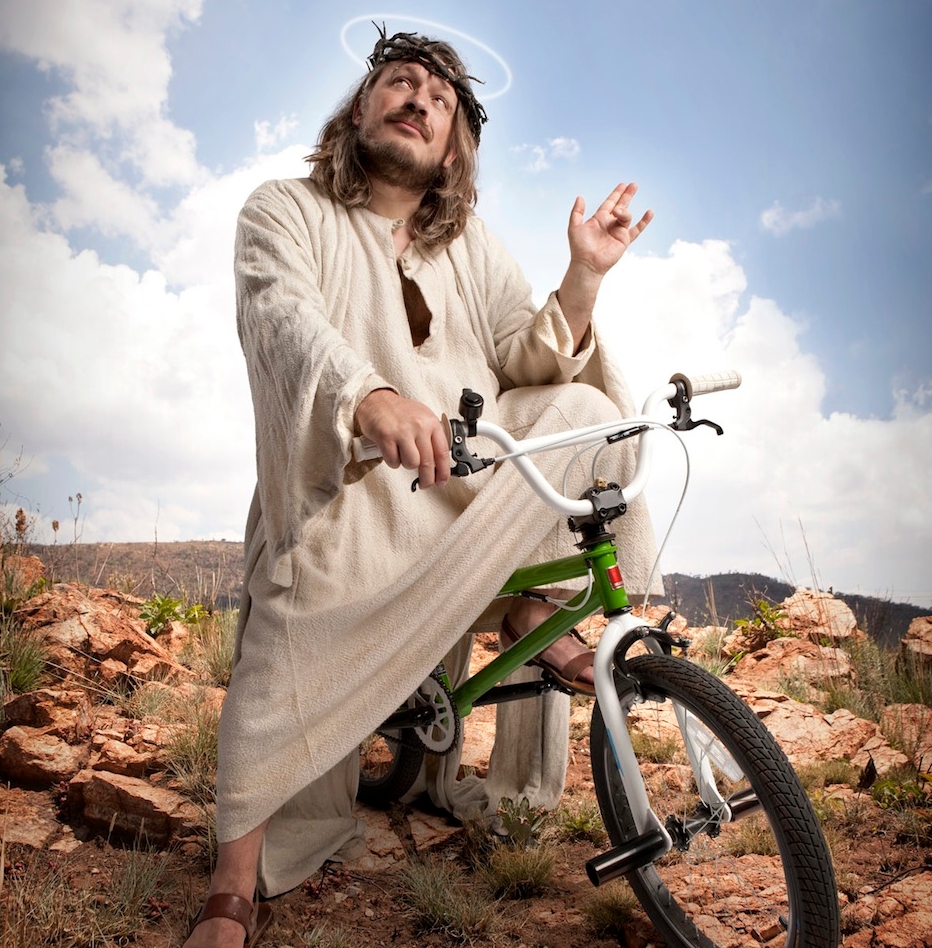 Playing to a packed crowd as part of the Manchester Comedy Festival, Herring proved why he is considered one of the hidden talents of the British comedy circuit. The provocative content of his last show catapulted Herring back into the limelight, coinciding with success over the past couple of years with the pioneering Collings and Herrin Podcast and the experimental As It Occurs To Me.

Co-star of the hugely successful 90s television shows This Morning with Richard not Judy and Fist of Fun, it’s obvious watching him live how much Herring and former double-act partner Stewart Lee influenced each others’ comedic styles. Although Lee may be more active on television these days, Herring is certainly not second best.

Despite what might seem risqué subject matter, Christ on a Bike isn’t actually a show that will really offend anyone. While calling himself something of an “evangelical atheist” and hinting that perhaps he is the Second Coming of the Messiah, his attacks are targeted at dogmatic religion and the flagrant hypocrisy of its institutions and those who claim to follow its values.

He establishes this early on by saying that Jesus was cool, but his followers are idiots: “He’s a bit like the Fonz in that respect.” He goes on to claim to have applied for the position of Pope after the death of John Paul II. He was a bit peeved when they gave it to a Nazi – “I mean, I wasn’t really expecting to get the job, but I thought if it was between me and a Nazi…you know?”

Herring isn’t setting out to upset people. True, he recalls a recent dream in which he nails Jesus’ hands and feet to a tree in an attempt to win a surreal ‘Tortoise and the Hare’ style bike race with the Son of God, but context is everything and his surgical dissection of passages from the Bible leaves the entire audience in stitches: “There is a mistake”, he bellows at the end of a well-researched skit about the self-contradictory Gospel of Matthew, “on the first fucking page of the  New Testament!”

As part of this routine he reads that entire page – a list of of who ‘begat’ whom, providing forty seven names starting with Abraham and ending with Jesus – from memory alone. This is followed by an equally faultless recital of the  ‘memory aid’ acronym of the first letter of each name, whilst the crowd follow on a projector screen behind Herring’s head.

While fast-paced and acutely intelligent, Christ on a Bike is far from heavy-going. Despite now being 43, Herring’s cheeky and crude boyish charm always shines through. He spends an extra few minutes talking us through some of the more stupid names in the Gospel According to Mathew (“‘Booz of Rechab’? How many ‘Boozes’ were there that he also needed to be known as ‘of Rachab’?”)  , before presenting his own version of the ‘Gospel According To Richard’. That Gospel – which proves that Herring is descended from Jesus via descendents such as Felch who begat Font and Scalextric who begat Antmcpartlin – was included in a free programme, donations for which went to the charity SCOPE, an arrangement that further underlined his basic point: it’s possible to be nice without joining idiotic institutions.

Despite being on the comedy circuit for over 20 years now, Richard Herring is still a hugely underrated comedian and well worth the very reasonable £10 (£8 concessions). He’ll be back at the Frog and Bucket for two nights at the end of March, and comes highly recommended by us.