Community campaigners scored a huge victory in the battle against the closure of Levenshulme Baths today as councillors ordered a report looking at a continued future for the centre. The decision comes on the back of a mass campaign – started only three weeks ago – which garnered support from thousands of people in the area. 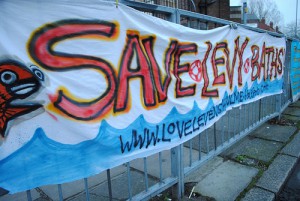 A packed-out Town Hall meeting today reversed the proposal to close Levenshulme Baths after hearing from residents, users of the pool and the head of governors of a local school.

In its budget proposal for the next financial year Manchester City Council had targeted the leisure centre as one of the public amenities to be hit in the bid to slash a quarter from its spending. The closure of the baths would have saved an estimated £294,000.

But today at an Overview and Scrutiny meeting the Resources and Governance committee voted in favour of suspending the closure and ordered the Chief Executive to bring forward plans for investment to replace the pool as well as keeping the existing one open. The baths will now remain open for at least two years.

The council had previously identified the leisure centre as “failing to meet fit for purpose standards” due to its age and poor condition, while the budget proposal document saw it as apt for closure due to its need for “substantial capital investment and its lower usage figures.”

However Linda Merrell of Levenshulme Community Association told the meeting how figures for the number of users from the previous year had not been made available. She issued a plea to keep the baths open, saying that it was “at the heart of the community” and a “multicultural meeting point” which provided invaluable services to many different groups such as over 50s and people with mental health issues.

Also speaking was the head of governors of Chapel Street School, who warned of enormous transport costs and up to five per cent loss in attendance time should local schools be forced to take children to other leisure centres. Swimming lessons form part of the statutory curriculum in primary education. 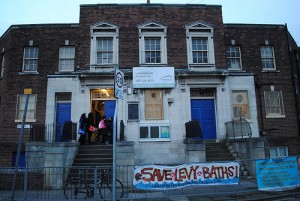 In response to the budget proposal the Council received over 100 enquiries and a petition with 1,700 signatures – the single largest response to any of the proposals to cut services in the city. Several more petitions are yet to be delivered and supporters say the number of signatures will at least hit the 2,000 mark.

The decision of the Labour-controlled committee to bow to the groundswell of public support is the culmination of a grassroots community campaign to keep the popular centre open. A group to oppose the plans was set up following the announcement of the Council’s budget proposals only three weeks ago.

Two weeks ago a march through Levenshulme assembled over 600 people and at a Town Hall meeting last week young children from the area delivered pictures and letters to council leader Sir Richard Leese. Meanwhile events such as a mass swims have attracted scores of residents.

Rachael Howe who helped set up the campaign told MULE: “We are all ecstatic. All we can do is thank the community for being so involved. If everyone hadn’t got involved this wouldn’t have happened. People need to get out and be seen to do this; it has to be done if we are to change anything, especially with the current government and council. We must use this as a basis to say if we can do it so can you.”

When asked if she hoped it would provide an inspiration for other community campaigns she said:

“That is definitely our aim. People all over Manchester and across the country should hear about what we managed to do. It began with three women on the steps of the baths upset about the closure and it has grown to thousands of people. If somewhere as small as Levenshulme can do it I don’t see why others can’t.”

Tonight there will be a party outside Levenshulme Baths at 5.30 – everyone is invited

The Save Levenshulme Baths group meet at the Bluebell pub every Wednesday at 7.30pm. They are asking people to come along to their next meeting to input where to take the next stage of the campaign