30,000 march against Conservatives in Manchester

Around 30,000 demonstrators took to the streets of Manchester today to protest against the Conservative Party Conference. The demonstration, named ‘Manchester for the Alternative’, was organised by the Trades Union Congress and the Right to Work campaign and drew in unionists and anti-cuts protestors from around the UK, with some coming from as far away as the West Country and Wales. 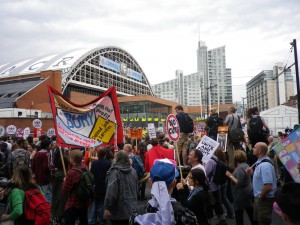 Despite the weather turning abruptly for the worse there was a festive atmosphere on the demonstration amongst the protestors who set off from three different locations around midday. Students met at the University of Manchester for a feeder march called by the Education Activist Network, which was colourful and noisy despite a lower turnout than previous student marches over the past year. Around 500 people set off up the Oxford road having been addressed at a rally at University Place by a mixture of student union leaders and activists.

Another feeder march set off from Salford, stopping to lay a wreath at Bexley Square which 80 years ago was the scene of a violent attack on protesters by police, to join the main demonstration which set off from Liverpool Road. The march was good humoured and peaceful as it snaked around central Manchester for several hours.

As it passed the conference site at the Midlands Hotel and Manchester Central, delegates were met by loud heckling as demonstrators expressed their anger over the government’s programme of cuts. As Conference delegates came to the windows of the four star Midland Hotel to watch the march, protestors chanted “jump! Jump!” There were also chants of “Cameron out!” and “Tory Scum”.

There was a heavy police presence, with officers deployed to block streets around the city centre. Many of the police barricades were decorated with ‘I Love Manchester’ banners. The police also deployed numerous CCTV vans and a helicopter, while those attending the student feeder march were filmed and photographed by police. Despite this, and suggestions circulated by the Manchester Evening News that the demonstration would bring violence to the city centre, there were only two arrests at the time of writing.

A rally was held at the end point of the demonstration at First Street, where the crowd was addressed by union leaders and activists for over two hours. Several hundred other protestors also met in Albert Square for an assembly called by Occupy! Manchester.

Union leaders were positive about the outcome of the day. Speaking to MULE, Mark Serwotka of the Public and Commercial Services Union said: “I think today has been absolutely fantastic. I don’t live in Manchester, but everyone I have spoken to has not seen a demonstration like this in years, and it shows that people really want to tell the Tories they are not going to sit back and let them get away with this brutal attack on the welfare state.”

Len McCluskey, General Secretary of Unite, described the day to MULE as: “absolutely fantastic”, saying “this is the biggest Manchester trade union demonstration ever. It encapsulates the incredible anger people feel over what is happening at the moment. There are those who say you can never change a government’s mind, well I reject that.

I believe in coming out on the streets, demonstrating, taking industrial action, engaging in peaceful civil disobedience, linking up with all kinds of other groups.”

Labour MP for Manchester Central Tony Lloyd also addressed the march, later telling MULE: “It’s important to realise that we’re not yet in the full force of the cuts. There needs to be a campaign to defend public services and our private sector as well. Our private sector depends on the public sector.”

Asked about the alternative to the Coalition’s programme, he said: “Ed Balls has got it right all the way through”, referring to Gordon Brown’s economic adviser during the financial crisis of 2007-08.

However, among marchers it was clear that cuts were having a major impact already, and were generating a great deal of anger. A job centre worker, who wished to remain anonymous, said: “I have two kids and we rely on all the services. Tax credit cuts have already been hurting, [and] food prices [have been] going up faster than I can keep up with. Within the job centre there are more people looking for every single job. The pressure from government is not to get them into work, it’s to push them harder and ‘get them off the rolls.’”

Sue Hanley, who along with her husband works for BAE Systems, said they were protesting to “show them they can’t keep doing this, they can’t keep slashing jobs. We have a young family to pay for.” Both Sue and her husband are now facing redundancy, following the announcement of 3,000 potential job losses at BAE in the North West.

She added: “We don’t get tax credits anymore, we don’t get anything. Those out of work get everything, we get nothing. When the VAT rise kicked in prices hiked, you had to cut back on everything, the lifestyle you worked to give your kids.”

Siobhán MacDonald, a bystander from Altrincham, described her difficulty coping with the current economic climate: “I have applied for about a hundred jobs, but got one interview. Last interview was a pharmacy job, they accepted me, but there was no-one in my area who offered childcare at the time I finished. Eventually I realised I couldn’t have the job. They only pay me fortnightly now, and I can’t stretch the money. I go to Tesco and I barely buy a few bags to last for days and it costs £50.” 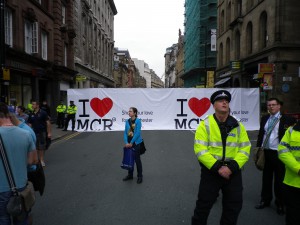 Asked about the attitude of the major political parties to single mothers, she said: “All they want is for us to be out of work, unskilled, and to do nothing so they can tell us we are worthless. Nowhere to go, no jobs, nowhere to take the kids, they took it all.”

Brian Davies, a worker at Remploy, spoke to MULE about the problems facing disabled workers as a result of government policy: “If the government close Remploy, that puts 2,500 disabled people on the dole. How do you think they will fare on the dole?  Let’s put it this way, four years ago over a thousand people took redundancy money, 90% of those people are still on the dole, do you think any of them will ever get another job? Never.

“Basically, if there are five people going for one job and one is disabled and couldn’t do as much work, then who would you take on? The benefits are being cut, it’s a double-whammy for the disabled person.”

Following a tense Labour Party conference the previous week, there was some criticism expressed by leading Trade Unionist’s about the Party’s approach to the cuts.

Said Serwotka: “The PCS is not affiliated to Labour. It is my own view that Labour started the assaults on the welfare state. We are quite clear we can afford a better welfare state than the one we have.”

Christine Blower, General Secretary of the NUT, similarly said: “We are quite concerned there has not been a more vigorous response from the Labour Party. The Labour Party brought in academies, it is true that academies under Tories are worse, but it’s the same direction of travel.”

A common theme running throughout the day among many participants of the demonstrations was the need for the trade union movement to branch out and work with people and organisations outside of their traditional remit.

McCluskey pointed to the Unite union’s recent decision to open up membership to the unemployed at a cost of only 50p a week.  The policy was supported by Serwotka, who  said: “The crisis in political representation in my union’s view, is because too many politicians occupy the centre ground and they agree on too many things. We can’t forget it was Labour who gave us privatising, PFI and tuition fees.”

Lee Jasper, representing Black Activists Rising Against the Cuts, stressed the importance of unions engaging with young people: “The labour movement needs to get out and politically engage young people. They should be going to Longsight, Moss Side, Wythenshawe.

“These kids today are the smartest political kids we have seen for a generation. These kids know what time it is. We have all this nonsense about these kids being purely criminals and louts, but when I spoke to kids who had rioted they said ‘this is my MPs’ expenses, this is my bankers bonuses.’ They have got a finer political analysis than all these Marxist theoreticians. I have seen fabulous leadership from the student movement, now we need to stick together and be a broader movement.”