After years of target-driven expansion, critics warn that adult education – when not supplanted by workfare – risks falling prey to a narrow agenda designed to suit the needs of low skill, low pay industries. In Salford, one group of prison leavers are trying a different approach. Helen Clifton reports. 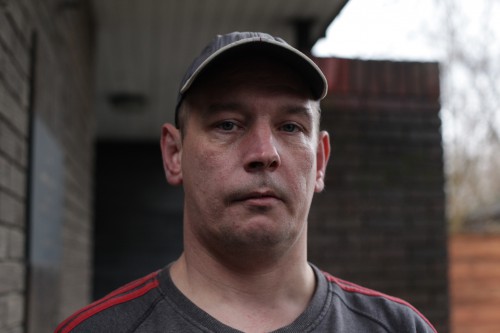 Tony Leather outside Salford’s Windsor Drop in Centre, where he attends the “Positive Changes” school of participation. Photograph: Helen Clifton

Barbed wire, protected doors and shutters make it almost impossible to figure out how to get into Salford’s Windsor Drop-in Centre.

Yet despite the intimidating exterior, once inside, the centre offers a cafe, showers, medical facilities and a hugely welcoming atmosphere.

For local ex-offenders – many of whom end up leaving prison homeless, with only £46 in their pockets – the centre is a lifeline.

It is now home to the self-titled “Positive Changes” group, made up of seven men, all of whom have been in prison.

Over the past six weeks, the group have been on a 12-week ‘school of participation’ course to help them re-enter work and education.

Tony Leather, 37, has spent four and half years in prison for offences including assault, robberies, and car theft.  He says it is unlike any other school he has been to.

“It’s our knowledge; the knowledge of people who have been in the situation we’ve been in.”

The course, run by the Community Pride Unit of Manchester-based charity Church Action on Poverty, was created by Weaste activist Sarah Whitehead – herself a school of participation graduate – after she realised that the 2011 riots were, in part, an expression of voicelessness.

“They haven’t got someone talking down to them who they don’t relate to,” she says. “They’ve got the freedom to learn what they want to learn. And I think that’s why they keep coming back. Because it’s what they want to do.”

Joyce Kay, Community Pride Link Worker, explains that giving participants control over their learning – within a rigid framework for discussion – allows them to have ownership of the process. The group eventually plan to create a handbook for prison leavers.

“By sharing their issues and experiences, they actually learn from each other,” Kay adds. “They can see that there is an action coming out of this, so they feel like it is relevant.”

Community Pride run a number of schools in Salford with deaf and blind people and young mothers, as well as the Salford Apprentice course for aspiring activists, in conjunction with Salford University. Each school costs between £10,000 and £12,000, and funding comes from the Lloyds TSB Foundation and the National Lottery.

Based on the teachings of Brazilian thinker Paulo Freire, the programme rethinks adult education as a process which empowers people to reflect on their society and take the initiative to create direct change – whether by forming businesses, creating social enterprises, or through political action.

“When people are isolated individuals, they can believe that they are unemployed because they are failures,” explains John Lockhart, Director of the Freire Institute at the University of Central Lancashire.

“But once you see unemployment in a more systematic way, as a product of how the economy and society works, it appears that there is a collective action that you can take.”

Lockhart says the current emphasis on vocational qualifications and preparing people for employment means that innovative adult education classes are being neglected.

Yet the government’s approach doesn’t seem to be working. During the first year of their flagship Work Programme, only 3.53 per cent of jobseekers found a job for six months or more – just 31,000 out of a total of 878,000 job seekers – despite a cost to the government of £453 million.

“If you can have something that isn’t about examining people, but stimulating them to develop a vision of what they can do, I think that would be money far better spent,” Lockhart says.

“It doesn’t appeal to the government’s targets culture. Yet some people are so far away from mainstream education that if you put them in these vocational courses, they just won’t go.”

The Workers’ Education Association (WEA) are the UK’s largest voluntary sector provider of adult education, and teach over 10,000 courses a year.

According to their research, in 2008/9, adult learners aged 19 or over enrolled on almost 4 million courses; yet less than two per cent of these were GCSEs or A-levels.

In the same period, only 530 adult learners in England took an economics or physics A-level.

The most popular apprenticeship for women is hairdressing, which in 2009 offered an average salary of £10,372. Most further education students are working towards a life of poverty; two-thirds of 12 of the most taught FE subjects provide training for industries that fail to pay a living wage.

And the University of Manchester currently offers no community-based or continuing education opportunities.

“There is a smoke screen going on, both in the Work Programme and the FE system. The FE system say they are preparing people for this high-wage, high-skills economy. But I’m saying that this training doesn’t exist.

“There are huge numbers of people who now live on the margins of society. FE gives them hope, but it is just a veneer. We need to think more about how we can change our system so that we can generate wealth.

“Despite the cuts, [the University of Manchester] has huge resources at its disposal, yet it appears to have no intention of deploying any of them in support of the adult citizens of the city or the region.

Faced with this situation, the WEA are now making huge changes to the way they work. “The current education system is extremely good at reinforcing and establishing the political agenda,” says Phill O’Brien, WEA Volunteer Coordinator. “Where do people now go to examine their place in the world, and what is their role in changing it?

“We are saying to our tutors, get your students to do research outside of the classroom that helps them understand the context of the learning, and that leads to some kind of an action.”

Back in Salford, the Positive Changes group passionately but respectfully discuss their top ten tips for improving prison-leavers’ lives. One of the men suggests “self-reliance”; another nods approvingly, before jotting it down.

Next week, the group are visiting Manchester Metropolitan University. And Leather is due to be interviewed by the BBC the following day on new Government plans to provide mentors for ex-offenders.

“To me prison isn’t a deterrent. If I go back there I go back there,” he explains. “It isn’t prison that’s deterring me from committing crime. It’s got to be your own choice.

“And until you decide that’s enough, it’s not going to change. Hopefully this is what this group is going to get into peoples’ heads – that you’ve got to choose to change.”