Protesters from the Disabled People’s Direct Action Network (D.A.N.) hit the streets of central Manchester last Wednesday as part of a national day of action against the Flexible New Deal.

The protests, called by the No to Welfare Abolition coalition, began in Portland Street outside the Beaver House office of A4E, a company contracted by the government to run “workfare” schemes which place benefits claimants into poor-paying temporary work placements. After being tipped-off that Minister for Disabled People Maria Miller was speaking at the Town Hall, the group then headed there, questioning her for 20 minutes after cornering her in a corridor. 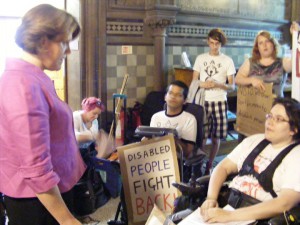 Maria Miller, Minister for Disabled People, is questioned by protesters.

Rebecca Young, one of the protest’s organisers, said of the meeting with Miller:  “We told her that the jobs that are being produced are quite often meaningless, almost always at minimum wage and occasionally below – under the auspices of ‘training’.

“The whole exercise doesn’t result in a real job with a real working wage. It takes people away from activities in the community such as voluntary work and sends them off to earn next to nothing doing a job that sometimes they can’t actually do for physical or psychological reasons.”

The protesters argued that disability leads to unemployment because of social and systematic problems, not because the disabled cannot or do not want to work. Said Young, “Most people on benefits are on them because there are no suitable jobs for them to do.” Disabled people are currently 7 times less likely to have paid employment, 23 per cent have no qualifications compared to 9 per cent of non-disabled people and the gross hourly pay for disabled employees is £1.22 less on average than a non disabled employee. As many as 7 million people of working age in the UK have a disability.

The protest comes in an increasing climate of hostility towards claimants of incapacity benefits. Chris Grayling, Minister of State in the Department for Work and Pensions, announced last week that by 2014, all 2.5 million incapacity benefits claimants will be removed from the scheme under plans to “crack down on the workshy”.

He told MP’s that claimants will be moved onto other benefits, with stricter requirements to find work. David Cameron pledged during the General Election to test every recipient on their capacity to work, but the piloting of the fitness to work trials  in Manchester has proved controversial.