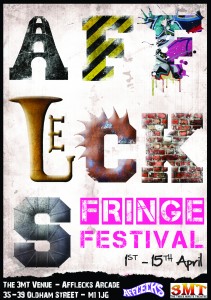 1 April: Sam Haine and the Bloodflames, Raven and the Lyon and Chloe Jones

The first ever Afflecks Fringe Festival kicked off on Sunday 1 April with a night of live music at the 3MT. Singer-songwriter Chloe Jones opened the show with a collection of pretty, folksy songs with an acoustic guitar and a beautiful voice. Chloe delivered a strong set of Joni Mitchell/Laura Marling-inspired pieces, which were a pleasure to listen to, if a little unambitious. Gina Frost, co-proprietor at 3MT, interrupted Chloe’s set to talk about the totem poles on stage that had been recently acquired from Jimmy Saville’s flat, after which Chloe forgot the song she was about to play. Wonderfully eccentric moments like this are what make 3MT such a surreal and unique venue.

Chloe was followed by Raven and the Lyon, with Caitlin Lyons on guitar and vocals and Raven Wakefield on bass guitar. They were accompanied by Ben from Sam Haine and the Bloodflames on the cajon, which added a depth and movement to the performance – it’s a shame he’s not a permanent fixture. They opened with a great song, ‘Perspectives’, which is full of energy and spirit, setting the bar high for their set. Unfortunately, the rest of their set wasn’t quite as strong as their opener and a couple of their songs were spoilt by a painfully out of tune guitar. But, the band has a good understanding of dynamics and each song is well constructed. The unassuming Caitlin Lyons has a strong and interesting voice, but struggled with diction and pronunciation, making her lyrics hard to understand.

The final act of the night was Sam Haine and the Bloodflames, a self-styled ‘epic folk’ band comprising violin, acoustic bass, electric guitar and cajon. Although the music can be melodically interesting, it too often sinks into the background and so the songs come to rely heavily on Sam Haine’s vocals. While he has a fine voice, it’s not characterful enough to carry the music and he too often resorts to a growling effect to add a passion which feels contrived. If this review seems negative, it is only because the band is so accomplished, technically and artistically, that minor flaws stand out. Sam Haine led the audience from song to song with a wit and self-effacing charm that strung the set together nicely.

Three acts which we would recommend to others and, hopefully, see again. 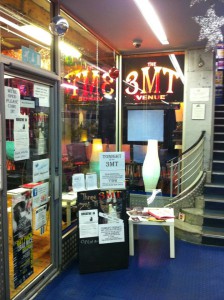 The opening act was two “experimental” poets, David Keel and Terry Morrison. There were beautiful and evocative moments within the material of both men, though sadly many of these were fleeting, the poems hurtling to an end before they had the time to fully capture the listener. The pair continually congratulated each other and joked on stage, resulting in more introduction and interaction than there was actual poetry. “Unanswered Questions” and “The Youth of Today” by Keel were the strongest poems, both thought-provoking and tender, enhanced by the piano accompaniment.

The second performance was a monologue by Nicola Jeanne, portraying an uninspired, alcoholic writer searching for “that big idea”. The writing was witty and well delivered, however the subject of the piece – not knowing quite what to write about – seemed to be its problem, so despite the piece being generally accomplished, the performance fell flat in places due to its slightly unoriginal central idea. The character criticises writers who are “emotional blabbermouths”, which for me highlighted the piece’s lack of real emotion, which resulted in me being impressed, but entirely unconnected to the piece as a whole.

The highlight of the evening was the final piece by Square Peg, which used a fragmented non-chronological narrative interjected with physical theatre to explore a couple’s lengthy relationship via a series of snapshots varying in tone and pace. Though at first a little repetitive, the story was told in an inventive and unusual manner, building a real sense of momentum as it continued and, by its emotional climax, I was captivated.

The Three Minute Theatre is by no means a traditional venue and I enjoyed the relaxed atmosphere and sense of playful nurturing it harboured. However, factors such as audience members wandering in and out, continual delays and seemingly constant in-jokes and unnecessary announcements, infringed upon my enjoyment of the evening. Ironically I was alienated by its attempted inclusivity and left feeling that, if the venue wants to retain or even grow its audience, it might be necessary to run a slightly tighter ship.

Kino have proven that vintage is not just for hipsters, in fact it’s something worth searching for. They’ve managed to take a selection of films from as early as the 1940s and present them in a way that makes each one seem fresh and new, bringing with them something rare that contemporary audiences hardly get today.

The night opened with music from Arrows, a young brother/sister act (Peter and Helen) whose hollow acoustic sound fits in well with the vintage night. Their music has a sincere and sweet feeling, at times somewhat middle-of-the road and perhaps underdeveloped but still quite lovely. Helen’s voice is sweet and charming, at times operatic; she is a siren that draws you into their music. Although they are talented musicians and entertaining live, you can’t help but feel that their talents were limited by the simple guitar and voice format. Two rising stars who will do well in future musical endeavours; two to look out for.

The films covered a variety of topics and styles, from the triumphant marching Pathé News reels to the now-hilarious “world-of-tomorrow” Golden Highways (a 70s film about Manchester Airport). All were presented in the traditional way, “whizzing through the gate at 24 frames per second, as nature intended,” as one host said. Although there were highs and lows in the films, each one managed to hold a rare charm that isn’t seen today. So much could be said about these films, both good and bad – variety was a huge part of the night. However, the night was not one for thrill seekers or challenging-theatre types. Everything from the music down to the setting gave the whole evening a very laid-back feel; part of the charm for those in search of bygone times but for me the night suffered slightly from a slow pace. Those in search of a truly vintage experience however will not be disappointed. All in all the evening was excellent for a relaxed night of variety and charm, but not one for those searching for the expected off-the-wall fringe theatre stuff.

The Afflecks Fringe Festival continued on Wednesday 4 with three new pieces in the intimate 3 Minute Theatre. The evening began with a monologue from Nicola Jeanne, entitled Artist Unknown. A story about a frustrated writer whose age and heavy drinking are catching up with her, the monologue contained many observations about the dreams of failed writers and the subjective nature of art, as well as stories of failed relationships. But the coherent narrative that should bind the monologue together was somehow missing, which had the effect of making the ‘reveal’ at the end of the story little more than a throwaway line.

Guitarist Alex Chow was the second billing of the evening. His music is entirely instrumental and provided a perfect complement to the theatre on either side. Square Peg, a two-person physical theatre company, finished the evening with Forwards and Backwards, a physical theatre piece which tells the non-linear story of a couple and their lives together. Square Peg aim to make theatre more three dimensional and, this piece, incorporating as it does movement and text, certainly succeeded. Admittedly, it was still a work in progress, and the players left a feedback form for audience members to fill in at the end. 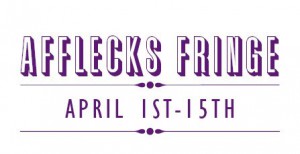 Dr Sketchy is hard to pin down. Somewhere between a life drawing class and a punk gig, Sketchy is a night of live dance and music, sketching, audience competitions and live models. It’s exactly the sort of bizarre mix of variety that you hope for from a fringe festival.

The night opened with a (slightly cringe-worthy) burlesque-style dance tribute to Joan Jett from the live model, who later carried out the various poses for the audience to draw. Minutes in, this performance had me expecting the worst, thinking I’d walked into the Butlins variety show from hell. But after the shock of the initial performance I warmed to the idea. Once you get into it you realise that Dr Sketchy’s is a unique experience, not just entertaining but a great method to make you produce some surprising sketches, it’s easy to see at the end of the night why people speak so highly of Dr Sketchy. 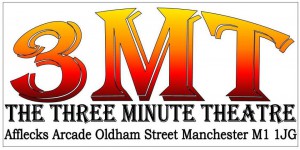 The first week of the Afflecks Fringe Festival ended with an explosive variety show, with burlesque, stand-up comedy, physical theatre and sketch comedy side by side on the bill. Zoe Iqbal compered with all the necessary vigour to rouse a Saturday night crowd and the show careered along at a chaotic and enthusiastic pace.

Iqbal’s stand-up comedy was assured and buoyant, but her handling of issues of sexuality and racism at times veered towards stereotyping over wit. Her material is in need of fine-tuning and a few rewrites before it does justice to her comfortably comic stage persona. Her ‘reverse strip’, which had her stumbling around the stage putting on her pyjamas, was a highlight of her act. As was the decision to pull a man from the crowd and get him to perform a mini-strip tease – Iqbal lucked out and selected an actor, who threw himself into the performance with hilarious conviction.

Cherie Bebe’s traditional burlesque act was well choreographed and unfolding an umbrella which showered her with glitter was an effective stage trick. Unfortunately, she didn’t seem to enjoy her performance very much and it was unnecessary to have her perform twice, with both her acts being so similar.

Square Peg were the highlight of the night and, as previous reviewers have described, their act was slick and well executed.

The 3MT cast’s sketch show was less successful. Alex Flitcroft is the stand-out performer and, dare I say, the only one with real comic instinct. The writing on many of the sketches was fundamentally problematic – in one sketch, which imitated a game show in which contestants had to guess what song their partner was dancing to, the same joke was repeated three times; the dancing partner did famous dances (the YMCA, ‘Thriller’ etc) and when the music came up, we discover he has been listening to something different. While mildly amusing the first time, the joke became less and less funny as it was repeated.

Taken together, though, the night threw together an enjoyable variety of acts and the crowd was thoroughly – if patchily – entertained.