This April the Department for Work and Pensions will be implementing the controversial ‘bedroom tax’, as part of the government’s welfare reforms. The “tax” will affect 12,300 social housing tenants in Manchester alone, who will be hit by 14 per cent to 25 per cent a week penalties for having spare rooms. On Saturday 16 March, those against the new legislation plan to march in protest. 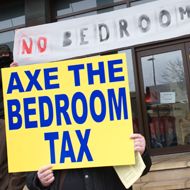 e man from Manchester spoke to Mule, giving his personal account of the new legislation, how it would affect him, what the government doesn’t make clear and the injustices behind it.

“I’m on £90 a week of ESA and also I get DLA of £20 a week. The DLA of £80 is paid in once a month. I pay about £35 a week on bills at the moment but that looks set to rise as energy companies and water have increased prices so I’ll probably be told I have to pay more at some point.

I will have to pay about £25 a week in rent when the bedroom tax comes in. I need a spare room for someone who provides help and care to stay over a number of times a week. Basically I will be using all my DLA and some of my ESA to pay the rent, DLA is given to help me with my health problems so I won’t actually be using it for that instead it will be used to pay the tax. The cost of food is getting more expensive so I won’t be eating as well as I should.

I have lived in my flat for nearly 13 years now, I have help and support from friends and neighbours on the estate, if I have to downsize to another area I will lose that support and am scared my health will get worse without having the help I get here. I really don’t want to move somewhere where I don’t know anybody.

When I have looked at the website to apply for social housing there’s hardly any on offer so I don’t know where they expect to put all the people they want to downsize. If I went into private rented housing the cost to housing benefit is about twice as much as social housing so in the long run this will end up costing even more for the council in housing benefit. This has just not been thought out properly.

I don’t really understand this new legislation. When the housing association interviewed me about it I was told being on DLA would mean I could get at least one bedroom exempt from the tax as I need someone to stay over and help me. They are still sending out information in their newsletters telling us if you are on DLA you will be exempt from the bedroom tax. I have since found out this may not be true at a tenants association meeting and the council will look at individual cases, come to my house take photographs of bedrooms and if they think I qualify I will be given a ‘discretionary housing payment’. I don’t know how long this will last for.

Manchester MIND have contacted the council about this but I have been waiting months to hear back from them. Everything seems to be taking a long time to get any answers from housing benefit or the housing association, making things more stressful not knowing how this is really going to impact on the money I get from benefits.

I know quite a few people in the same situation; some are getting less money than me so it must be really stressful for them. People have had ESA, DLA stopped and are surviving on a reduced amount of benefit while the appeal gets looked at. I know people who have had job seekers stopped due to missing an appointment and are only getting the occasional crisis loan of around £30 pounds to last 2 weeks. How are they meant to survive on that amount of money?

I know someone who is in a serious mental state because of this. He keeps talking about just wanting to give up and die. Other people are raging about it threatening to burn out flats and just get sent to prison where they’ll at least get a roof and regular meals instead of wondering where the next meal is coming from. I hope it doesn’t come to that.

I’ve listened to radio phone-in shows where people just don’t see the point in carrying on. People on benefits seem to be being singled out by the government: having their benefits cut or stopped altogether.

Everyone just wonders how much more are they going to cut. The Tories seem to be constantly chipping away at anything that helps the poor. Maybe they just want us all with as little as possible. What next? Are we going to see Victorian like workhouses? We didn’t cause the economic problems in this country, it was the rich that are responsible for that, but the folk with next to nothing are being made to go without because of their greed and stupidity.

They want to cut more of the welfare so they can spend it on the military is something I heard recently. There’s always money for bombs but not homes – how many bombs do they need? How many times do they want to blow the planet to bits?

At least some people are now organising to oppose this bedroom tax. We need people who might not be effected by it themselves to stand with us and say enough is enough.

At least where I live there are people prepared to do this. If its only the unemployed and the sick and disabled who oppose it we wont be listened to – we need people in work who live alongside us on the same estates to take a stand against this, like what happened with the poll tax. When everyone stands together then we have a chance of getting something changed or totally getting this tax scrapped.

Why is it ok for wealthy MPs to get free houses on expenses but the poorest are not even allowed a spare room? They don’t just get given a one bedroom flat, they’re able to get hold of luxury mansions with god knows how many rooms? All paid for by people’s taxes.

There needs to be a big programme of social housing to be built, not more of these luxury apartments that seem to spring up on every bit of spare land. It would give people jobs as well and so the economy would benefit from it.”