Protesters gathered outside the Chartered Institute of Housing’s annual conference at Manchester Central last Thursday to call on local government minister Eric Pickles and the government to end the controversial spare room subsidy, or ‘bedroom tax’. The demonstration, led by the Greater Manchester Anti-Bedroom Tax Alliance, was timed to coincide with a key note speech by Pickles to delegates at the conference. The protest was widely attended by affected tenants and activists from across the North West. 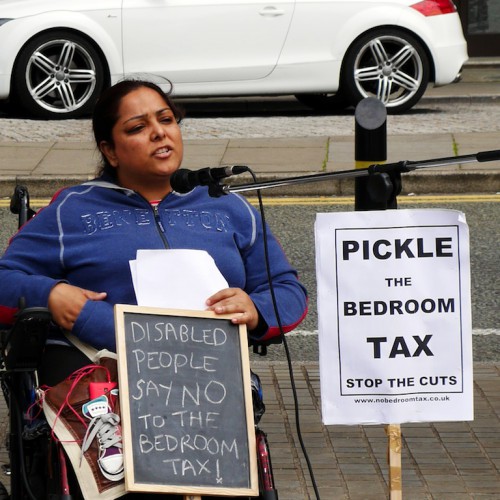 Activist Manjeet Kaur speaking at the protest outside the housing conference.

Organiser Mark Krantz called the bedroom tax a ‘policy of malnutrition’. He said: ‘We’re seeing people who are being forced to choose between food and clothes and rent payments.’ He added that one Manchester-based activist who has been hit by the bedroom tax has lost two stone as a result of being unable to afford adequate food while keeping up with the rent and council tax payments.

Wythenshawe resident and anti-bedroom tax activist Honor Donnelly spoke about her fight against eviction since the introduction of the austerity-driven reform in 2013. She said: ‘It is daunting to have to continue to fight this appeal. At times I can’t even bear looking at the paperwork.’ Donnelly currently faces eviction after being unable to keep up with extra rent payments on her home. She is unable to work as she is suffering from stress. Her case illustrates the Anti-Bedroom Tax Alliance’s claims that the changes to housing benefits hit the poorest and most vulnerable the hardest.

Jimmy Thornton, head of the City Council branch of Unite, said that the protest was directed at the large housing companies gathered at the conference that should show support for the national campaign against the government’s programme of housing reform. He added: ‘Pickles is totally out of touch with the reality of poverty and homelessness in Manchester.’

Figures from the Ministry of Justice released earlier this year indicated that repossession orders were at their highest level for over ten years. In the first quarter of 2014, there were 47,000 eviction claims, of which the majority were made by social landlords – local authorities or housing associations. Speaking at the protest, John Davis from the Leeds Anti-Bedroom Tax Alliance pointed out that the cost of legal fees for repossession orders would fall on the taxpayer, challenging the government’s claim that housing and benefit reforms were saving the country money.

United Nations housing expert Raquel Rolnik said last year that the effects of the bedroom tax on vulnerable people in Britain were ‘shocking’. In a report on the impact of the bedroom tax, she concluded that the policy was affecting ‘the most vulnerable, the most fragile, the people who are on the fringes of coping with everyday life.’

Representatives from disability rights groups, trades unions including the Public and Commercial Services union (PCS), UNISON and Unite, The People’s Assembly Against Austerity and migrant rights charity RAPAR (Refugee and Asylum Seeker Participatory Action Research) were at the protest to show their opposition to the controversial tax.