Book review: “Gaza: Beneath the Bombs”

One year on from the carnage of the so-called Gaza war the 1.5 million people of the strip are still prisoners in their own land, trapped by the active efforts of Israel and the silent complicity of her allies in the international community. The lack of any principled attempt to rein in Israel has resulted in the emergence of a widespread network of international grassroots activists informed by principles of non-violent direct action. They are doing what they can with whatever resources they can muster to implement the international laws the international community seem intent on ignoring. Gaza: Beneath the Bombs offers a firsthand glimpse of this movement in action. 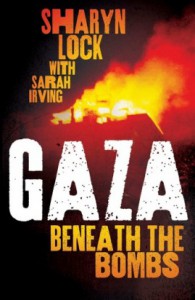 The book covers the day by day, eye-witness account of an international activist Sharyn Lock, who reported on last year’s Israeli war on Gaza as it happened, originally on her blog Tales to Tell. Documenting the highs of challenging the Israeli siege by sea as well as the lows of the daily dangers faced by Palestinian ambulances in a sometimes lethal endeavour to save lives, Gaza Beneath the Bombs provides a uniquely illuminating view of the continuing oppression endured by Palestinians living in the Gaza Strip. Lock also manages to express the seemingly impossible optimism of Palestinian humour and courage in the face of so much hardship.

Lock writes humbly and conscientiously, allowing the subjects of this human reality not only to speak directly to the reader. Hearing and seeing them, through the startling images accompanying the text, their pain over the sight of destroyed homes and their grief for the lost sons, daughters, fathers and mothers leaves the reader attached to their story. We become aware of the essential humanity of a people who must struggle to be even seen as human in the mostly averted eyes of the world.

No amount of academic material can match this account of the Israeli offensive: Lock witnessed the impact of bombs, explosions, bullets, and tanks with her own eyes and evokes within the reader a real sense of lived experience. She writes about her feelings, of sharing, of solidarity, of living the moment and staring – shocked and disorientated – at the horrors amidst the tear gas, fumes and tears of emotion. The experiences are all profoundly felt. It offers us an image of modern warfare that gets lost in the computerised Star Wars-like images projected from our TVs.

It is amazing that individuals exist who are willing to risk life and limb to expose, evoke and speak about horrors most would rather not even hear about. But this book is not the story of the white westerner saving the poor Palestinian. It is rather a retelling of their tales, stories which have happened, that are happening and will continue to happen unless something drastic is done to change things. It is a must read.

Gaza: Beneath the Bombs is published by Pluto Press.

The launch event for the book takes place at 8pm on Friday 29th Jan at greenroom arts centre on Whitworth Street, with readings from Sharyn Lock and friends, a raffle to raise funds for Defend the Rescuers and music from guerilla buskers The Single Cell Collective. Free entry.