New queer cabaret-cum-variety Mother’s Ruin returns to greenroom for their third outing of the year with their alt take on the Christmas Special. Theirs is a 80s-tinged Yuletide Ding Dong, replete with shoulder pads, big hair (tantalisingly “available on the night”) and dragged up soap pastiche “Stark Dallas Naked”. Never has the description “Variety Show” been more apt. 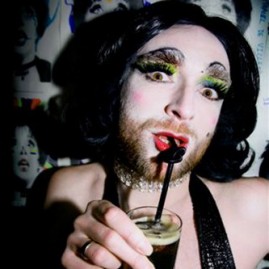 The gimmicks, though rib-tickling, should not distract from the real talent and inventiveness showcased on the night. Mother’s Ruin has left audiences speechless at the tragic-comedic mime performance of Dickie Beau. It has also had them roaring along to the musical stylings of Topper and Butch. The alternating tone is managed by host and ukulele-wielding queen of the scene Jonny Woo, an intoxicating guide through a promenade of three halves. She offers up bottles of gin in raffles and otherwise threatens to fall off her stool. All in the name of art, of course.

The night is attracting big names from the alternative drag scene and beyond. Saturday’s line-up features more than Dallas. Woo, self-titled tranny superstar and subversive ringleader, is joined by David Mills, whose old-time crooner style and pop reinventions redefine bitchiness. His cutting witticisms draw blood, and audiences lap it up. Quartertime, a local jazz quartet, entertain during interludes.

Mother’s Ruin uses the bar and mezzanine space for the performances, rather than the theatre, allowing the audience to mingle, albeit in a small space. The acts must up their game to grab attention away from bartenders and friends. The resulting atmosphere is playful and has more than an air of anything goes. It also means that acts back onto the street through the greenroom’s glass walls. Passers by will do double-takes at a man with a strap-on vest, for an added layer of entertainment.

The greenroom’s other cabaret night, Vaudeville, is held in the theatre, with the bar open throughout so viewers can to wander in and out. It suffers as a result of the constant interruptions. The staging for Mother’s Ruin avoids this, managing to engage with the audience while maintaining an easy going atmosphere.

With previous nights offering twists and twirls, songs, dance, puppetry, mime, drag and everything else you can’t imagine because it has to be seen to be believed, this Ding Dong is set to raise eyebrows, smirks and plenty of gin and tonics. Just what the doctor ordered.

Tickets are £10 in advance, available from www.wegottickets.com

£7 concessions are available on the door.