The University of Manchester Students Union (UMSU) has come under fire following its decision to offer many of its long-term staff ‘voluntary’ redundancies at the same time as campaigning against education cuts and job losses at the university. 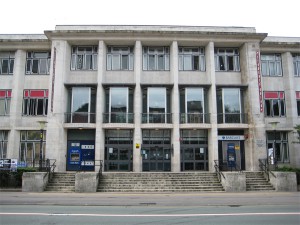 Staff received letters last Thursday 20th January informing them they could take voluntary redundancy or re-apply for new roles under a new staffing structure. However, at a meeting with Unison yesterday, staff complained that they could not properly consider applying for the new roles, since they had only received draft job descriptions which lacked crucial details such as salary pay.

Individual staff members, who did not wish to be named, expressed anger that there was, “a lack of due process” involving the restructuring and that the changes were being “steam rollered through.” The staff agreed to register a collective grievance through Unison to the Students Union, which will put the process or restructuring on hold for the near future.

There was further ambiguity as to who officially employs the staff at UMSU. The Union is run by fourteen elected students who form the Executive Committee and who act as legal trustees. They are answerable to a further 50 elected students Council members. Certain documents such as the Students Union consultation stipulate that, “All matters concerning staff shall be recorded in separate confidential minutes which shall be the property of Council, and such matter shall be dealt with only by that body.”

However, the Student Union is officially a charity, and the Charities Commission website stipulates that, “The trustees have the ultimate responsibility for running a charity, for its property, finances and the employment of any staff or volunteers.”  It also states, “Trustees must ensure that the charity does not breach any of the requirements or rules set out in its governing document.”

The Students Union is currently seeking legal advice on the matter. The Union Council is due to be discussed the issue at a Council meeting next Tuesday 1st February.

Between 2009- 2010, an external auditing process was conducted by the previous Student Union Executive to improve the Union’s primary aim of representing students. The audit recommended, among other things, a staffing restructure. As part of this restructure the previous Executive agreed to remove the two most senior managers.

Thomas Barlow, former Communications Officer between 2005-06 stated, “There has been a widespread perception over the years by anyone who had anything to do with the Union, that its poor performance in certain areas was largely down to mismanagement at the top rather than their staff.”  One member of staff, who did not wish to be named, told the MULE, “There was never a chance to do any training under the previous management.”

Over the summer of 2010 there was a second auditing of staff structures and performance reporting back to new Union director Andrea Strachan in November. Staff were asked to feed into this audit report as to how their role could improve the Union’s performance.

The report  recommeneded further re-structuring.  A new structure was created with some existing staff being automatically ‘matched’ to new roles – whilst others were told they could either take voluntary redundancy or apply for the new jobs.   Staff have not been allowed to read the results of this report, or respond to its findings, even though it now forms the basis of the restructure.   Staff have, however, been invited to discuss their role with the new Director Strachan.

Strachan intended to propose the redudancy deal before Christmas, but was pursuaded by Unison to postpone the process until the new year.   According to Unison members, the original proposal meant that staff who were unsuccessful in re-applying would not receive a redundancy package. This has now been changed at the request of Unison representatives.

Whilst many staff at Thursday’s Unison meeting agreed that UMSU needs to reform itself and improve, there was also the view that the changes were being rushed through by a new director who had only been in the job for a few months and who had not taken the time to properly understand the workings of the institution.

Current Communications Officer Jeremy Buck stated, “UMSU agreed the timetable with Unison, who have been representing all of our staff at this time. This timetable has an element of flexibility, and Unison and UMSU will find an agreement that is both legal, and responsible.” 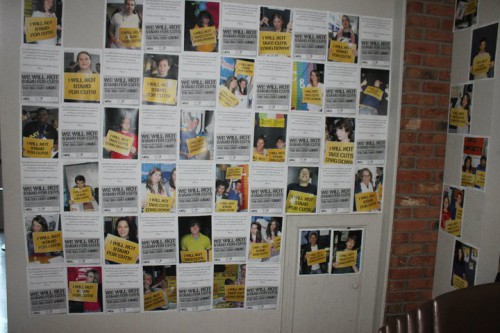 "I will not stand for cuts." UMSU Campaign

Members of staff, who did not wish to be named for fear of repercussions,  said they were disappointed that the proposals had been approved by all but one of the elected student Executive Committee – Campaigns Officer Amanda Walters.

However, Masters student Sarah Kerton, speaking at a meeting of concerned students yesterday said, “The lack of official minutes documenting the Trustee’s decision brings into question its legality – since others will not be able to scrutinise the decision.”   Staff also pointed out that some existing executive members were elected with manifestoes supporting  transparency and accountability in the Union’s affairs.

The move has also fuelled claims of hypocrisy given the Union’s active role in campaigning against redundancies at the university due to government cuts.  UMSU’s ‘Stand Against the Cuts’ section of its website has a statement reading, “We need to come together as a student body and say that this is unacceptable, that these cuts are an ideological choice and that we have the power to stop them… Last year, students at universities across the country…managed to stop department closures, staff redundancies, and other cuts to our education, by protesting, by demonstrating, and by campaigning.”

Third year Environmental Science student Jess Bradley said, “I think its massively hypocritical for the Union to be implementing these redundancies in their own backyard, whilst campaigning against cuts.”   Despite government cuts to higher education, the Students Union is not due to receive a reduction in its block grant from the University this year or next.

Communications Officer Jeremy Buck stated, “The restructure at UMSU is a separate issue entirely, as it is required in order for us to provide a better service to our members, the students, and for us to meet our aims and goals.”

Bradley continued, “Given the links between the Student Union movement and the trade unions it is incredibly sad that staff are not been given a chance to prove themselves. The fact that some members of staff may be underperforming is hardly a surprise, given that the historic lack of training at the Union.”

Many staff, again who did not wish to be named, commented that an atmosphere of distrust, suspicion and fear was now present within the institution and that there had already been “a drop in morale”. Meanwhile, students involved in the recent anti-cuts occupation have begun organising to oppose the Union’s redundancy proposals.