Playwright Lydia Besong and her husband Bernard Batey have won their right to asylum after a six-year struggle to be recognised as refugees. 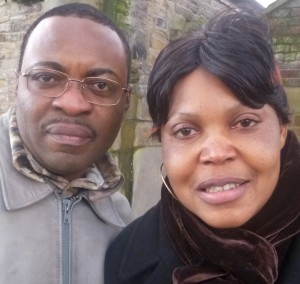 Lydia Besong and Bernard Batey after their release from detention in January 2012. Photograph: Angela Gracey

The pair fled Cameroon in 2006 after they were imprisoned and tortured for their membership of the SCNC, an organisation which peacefully campaigns for the independence of the English-speaking minority of southern Cameroon. Besong, an English teacher in her home country, was raped by a uniformed guard while imprisoned.

Since arriving in the UK the pair fought and lost several appeals against the Home Office’s refusal to grant them leave to remain in the UK. Besong was detained twice, with the pair coming within hours of deportation attempts thwarted due to the last-minute intervention of the courts.

Governed by President Paul Biya since 1983, Cameroon has attracted criticism from the US State Department and was denounced by Amnesty International’s Deputy Director for Africa Tawanda Hondora, who noted that “political opposition is not tolerated in Cameroon. Any dissent is suppressed through either violence or abuse of the legal system to silence critics.”

The couple’s solicitor, Gary McIndoe of Latitude Law, told reporters that their immigration tribunal “has recognised that Lydia and Bernard’s political and cultural activities will place them at risk if they are returned to Cameroon.

“This is a deeply important victory for everyone interested in ensuring the safety of our refugees.”

The UK Border Agency has five days to appeal the decision.

Besong said she and her husband felt “a great relief” that they had been granted leave to remain. Speaking to Mule, she said they hoped that now they would “have our own life to live rather than waiting on other people to make decisions about you.

“We want to be working, living and feeling free like normal people rather than living in fear all the time.”

Throughout their time in Manchester the couple have continued to work as human rights activists. Batey contributed to the establishment of the city’s first voucher exchange programme for destitute asylum seekers, while Besong became a management member of the female refugee self-help organisation WAST.

Besong also authored two acclaimed plays, How I Became an Asylum Seeker and Down with the Dictator, produced and performed by fellow members of WAST in cities across the UK. The plays explore the experiences of asylum seekers in the UK, and political corruption and censorship in African dictatorships.

Throughout their struggle the couple has been supported by the parishioners of their Rochdale church, St Ann’s, and have won the backing of human rights groups in Manchester and English PEN, the organisation which campaigns for the freedom of speech of writers worldwide.