Protestors called for the closure of Yarl’s Wood immigration detention centre at a rally in Manchester city centre last Saturday. Around 200 people gathered in Piccadilly Gardens for a march organised by Women Asylum Seekers Together (WAST), Safety4Sisters, and Manchester Migrant Solidarity (Misol).

The WAST choir at the protest in Piccadilly Gardens last Saturday.

Yarl’s Wood Immigration Removal Centre, in Milton Earnest in Bedfordshire, is run by private contractor Serco, currently under investigation for claims that its staff committed sexual assault of detainees. These allegations arose earlier this year shortly after the death of 40-year-old Christine Case, who collapsed and died in her room at the centre in March. She was the fourteenth person to have died in immigration detention centres in the UK in the past 10 years.

There are currently 400 women detained in Yarl’s Wood. Allegations of sexual abuse of detainees by staff at the centre were made public last month following a legal battle, after Serco attempted to suppress an internal report into the abuse.

Nigerian migrant rights activist Aderonke Apata spoke at the protest about her experiences of being a LGBT detainee in the UK immigration system. She told The Mule that this demonstration was significant because it gave voices to those who had personally experienced the immigration system. ‘This wasn’t people speaking for other people’, she said, ‘we heard women telling their own stories about what goes on in Yarl’s Wood.’

Apata has been instrumental in organising women inside Yarl’s Wood, and continues to fight for its closure, as well as for her own asylum case. She said: ‘Conditions in there are very bad, with poor healthcare, abuse and bad treatment, when these are women who have experienced imprisonment and torture before.’ She has been asked to give extensive proof of her sexuality to avoid deportation to Nigeria, where homosexuality is illegal. Her brother, son and ex-girlfriend have been killed in vigilante attacks in Nigeria since she has come to the UK, but she is still facing deportation following failed asylum applications.

Apata and the other protesters at the march call on the government to review its use of institutions like Yarl’s Wood. Misol – the group she co-founded in Manchester – has raised awareness of the treatment of migrants in the UK immigrations system. Refugee advocacy groups have argued that the detention of women, many of whom are fleeing abuse, violence or persecution in their home countries, in prison-like removal centres in the UK is inappropriate and disproportionate. Apata told The Mule that detaining migrant women in institutions like Yarl’s Wood can trigger mental health conditions like post-traumatic stress disorder (PTSD). She said: ‘Many women develop mental health problems that they didn’t have before. The prison environment brings back bad memories. There is no reason to detain these women in prison, for this is what Yarl’s Wood is.’

This week former mental health nurse at Yarl’s Wood Noel Finn spoke out about inadequate mental health treatment for detainees. He told the BBC: ‘The system wasn’t driven for mental health. It was more driven about ‘are they fit to fly, physically.’ He also said there was a ‘toxic culture’ of inappropriate sexual behaviour by guards. 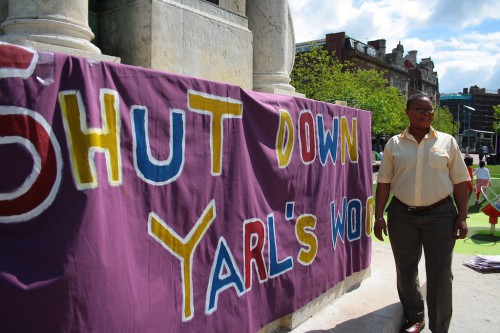 Campaigner Aderonke Apata next to a banner demanding the closure of Yarl’s Wood.

Serco has responded by saying that it has dismissed staff found guilty of mistreatment, and that they ‘absolutely reject’ the suggestion of an endemic problem of sexual abuse at the centre.

Organiser Vicky Marsh from Safety4Sisters, a group campaigning for the protection of migrant women, said: ‘The whole system dehumanises asylum seekers. Poorly paid contractors are made responsible for the most vulnerable people, including very vulnerable women, and the result is systemic sexual and emotional abuse and inadequate medical treatment, in a structure which criminalises migrants.’

MPs are now due to investigate the allegations of abuse at Yarl’s Wood, with questions being raised about the suitability of Serco to provide services for vulnerable people.

The allegations against Serco contribute to growing doubts about the use of private contractors to provide services to vulnerable migrants. Abuse in the system of immigration detention has not been limited to the women’s removal centre at Yarl’s Wood. Private security giant G4S has been dogged by allegations of abuse of migrants and prisoners in its care both in the UK and abroad. Charity Medical Justice reported on abuse and violence by G4S staff, including cases of sexual assault. Most of the assaults took place in the airport or on planes during the deportation process, leaving failed asylum seekers with no chance of redress through the UK justice system. In 2010 Angolese refugee Jimmy Mubenga was killed in the care of G4S guards while being deported from the UK. The three guards responsible are due to be tried for manslaughter.

The protest on Saturday drew attention to the often unheard experiences of migrants in the British immigration system. Apata said: ‘This is going on in our backyards, and yet people do not know about it. When they find out, they are enraged.’ One Misol activist added: ‘Many members of the public passing by the protest didn’t know previously about Yarl’s Wood or the situation for asylum seekers and were shocked to hear about it.’ Those attending on Saturday want to continue the campaign with more actions. ‘We will speak with a louder voice until it is heard’, Apata said, ‘and continue to make more noise about Yarl’s Wood until it is shut down.’