Food prices have being going through the roof in recent years, and anti-poverty campaigners from the World Development Movement (WDM) say bankers gambling in the financial sector are to blame. 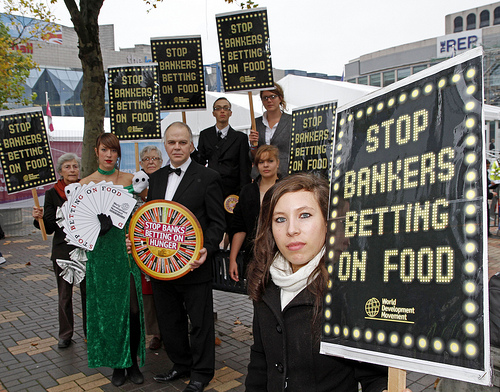 Banks, hedge funds and pension funds speculating on prices are causing the value of staple foods people and farmers in the developing world rely on such as wheat, soy and maize to wildly spike and crash at short notice.

Now, Manchester WDM activists will hold a stall a week on Saturday, 4 May, outside Chorlton’s co-operatively run Unicorn grocery to urge people to write to their MPs to put pressure on Chancellor George Osborne ahead of a major EU summit on curbing the trade.

Rising prices are bad enough in Manchester, with food banks popping up to deal with severe benefit cuts and 15 per cent of people forced to skip meals thanks to squeezed living standards, according to a recent survey.

Across the developing world it’s even worse, with nearly 44 million people driven into extreme poverty by food prices in the last six months of 2010 alone.

As a result households are losing their savings and left unable to afford education or healthcare, with women sometimes forced to take up risky employment such as domestic labour or sex work.

In the meantime Barclays Bank is estimated by the WDM to make up to $340 million a year by speculating on food prices, and the market for financial food speculation as a whole has doubled from $65 billion to $126 billion in the last five years.

In February Barclays announced a partial withdrawal from food speculation after widespread outcry, but other banks are still active in the trade. And Britain, home to one of the world’s biggest financial centres in London, has so far done little to stop the issue.

The action will come a month after WDM campaigners set up a “bankers anonymous” stall outside the four banks crossroad in Chorlton, telling the financial sector to kick its food gambling habit.

After the last action two weeks ago Chorlton campaigner George Morton explained, “George Osborne and his opposite numbers in the EU will be voting this summer on draft regulation to curb food speculation. Local MEPs across party lines have agreed on this but our government appears complacent about the tough controls which will protect people from this profiteering.”

Matthew Gobey from the Manchester WDM group said, “Banks need our help to quit gambling on food. Only strong regulation will stop speculation playing havoc with prices. Food is a basic human need and banks must not be allowed to gamble on it to make a fast buck.”

Visit here for more information on the campaign

Correction: an earlier version of this article stated the date of the stall as 27 April. The correct date on which the stall will be held is Saturday 4 May from 12pm