Citizens Advice Bureaux (CABs) across the city have been rocked by the abolition of funding of debt advice to all except those in the most desperate situations. With this latest blow to the city’s advice sector the chief executive of Manchester CAB is predicting ‘misery’ for individuals in vulnerable situations who rely on such services.

Free-of-charge debt advice services provided by Manchester CABs are set to be decimated following last month’s announcement by Mark Hoban, financial secretary to the Treasury, that the Financial Inclusion Fund (FIF) would be scrapped. Set up under the previous government in 2004, the fund consisted of £130m for training and employing dedicated debt advisers across the country.

In the last year Manchester debt advice services helped 6,670 people resolve problems. However with the FIF to end on March 31 the five caseworkers employed by the CAB are likely to be made redundant – and consequently available services will be stripped to a bare minimum.

Andy Brown, Chief Executive of Manchester CAB, spoke of the devastating impact this will have:

“A number of people won’t be able to access any form of debt advice at all. The remaining service will be minimal and you could be waiting two to three months for an appointment. By that time a person could have gone to court or even lost their house.

“Essentially this means that the most vulnerable people won’t have access to legal advice in areas of social law. So those who can afford paid services will have access to justice, while those without money will not.” 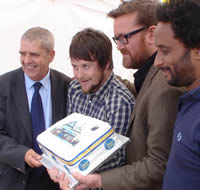 The only remaining free face-to-face services available to those facing money problems will be through legal aid funding. Yet as legal aid only covers civil law matters for those on the lowest incomes, the scope of provision will be very restricted.

“[The eligibility criteria for legal aid funding] will exclude a lot of people who are in reasonably low-paid employment but who are just over the threshold. Those are the types of people that [FIF funded] debt advice helps,” Brown continued.

Since its establishment five years ago the FIF has had successful results. In its first two years of operation, £45m facilitated the recruitment of 544 advisors, who on a national level provided help to around 90,000 clients. This funding even allowed a limited roll-out of financial inclusion services into prisons, a section of the population where, according to a report last year by the Prison Reform Trust, large numbers are excluded from access to basic services such as bank accounts. The same report found that CAB were the most trusted source of advice to prisoners and their families and that “the vast majority of [those who had experience with debt services] found it useful.”

Telephone advice services such as National Debtline and the Consumer Credit Counselling Service will continue to provide a reduced form of help, however their ability to satisfactorily resolve clients’ problems is doubtful as long-term casework cannot be conducted. A major obstacle is that without being able to see a clients’ paperwork, advisers cannot properly form a coherent picture of the extent of the problems they may be facing.

Furthermore the ability of caseworkers to get a grip on clients’ financial problems at an early stage will be severely impaired, which is leading to fears within the sector that people will only seek advice when they are on the verge of house repossessions and court orders.

“Early intervention into cases ensures people deal with their problems before they spiral out of control,” stresses Brown. “Often, for example, when mortgage and rent possession proceedings are imminent it is too late to keep families in their homes.”

This will have ramifications not only for those who will be exposed to legal claims but also for the public purse: according recent calculations from housing charity Shelter each family forced out of their home costs the state on average £50,000.

The decision to abolish the fund comes at a time when the need for debt services is growing at an alarming rate, with 1.4m people nationally receiving advice from various charities and organisations. In 2008/09 more than four out of every ten contacts with clients that Manchester CAB made were in relation to debt; and last year alone Manchester CAB recorded a 100 per cent increase in enquiries relating to bankruptcy and debt relief orders (DRO), while over £20m worth of debt was dealt with.

This is a trend which will only continue to rise says Brown, who believes “it will certainly increase in the wake of rising inflation, especially in food and fuel prices as well as job cuts in the public sector locally.”

The occurrence of debt is highly linked to mental health problems; a literature review by the Royal College of Psychiatrists in 2009 estimated that half of adults in debt may have mental health issues, while mental health charity Mind has found that the concentration of debt among lower income groups can be both a symptom and cause of deprivation. Their 2008 study found that almost 50 per cent of those in debt were living on a weekly household income of £200 or less – defined by the Government as “living on the poverty line” – and according to its authors “[i]n short, poverty is both a determinant and consequence of mental health problems.”

The scrapping of FIF coupled with the government’s desire to massively restrict the areas of law covered by legal aid funding – by removing large categories of civil law currently covered including employment and welfare – could deal a lethal blow to Manchester CAB’s ability to deliver such vital services.

And if the government continues down this austere path the outlook is grim. While an average of 31 people passed through the doors of each CAB centre in Manchester on every day in January, Andy Brown estimates that should FIF and legal aid be scrapped “we would only have been able to deal with about four or five of them.”