Close Knit: A celebration of knitting in Manchester

This year Manchester is putting on Close Knit, a twelve month festival dedicated to the art of knitting. Sarah Adie attended the latest of their events to find out more about the ongoing theme inspired by the recent discovery of boxes full of knitting patterns in a cupboard at the Whitworth Art Gallery, some dating back at least 100 years. 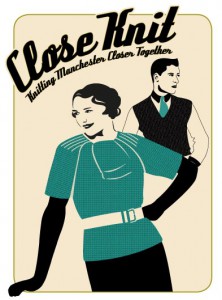 Throughout the year a workshop is held each month focusing on a particular aspect of the craft. March saw eager knitters from all over Manchester congregate at Platt Fields’ Gallery of Costume to learn the finer points of cable knitting – a traditional technique of the kind you may see on fishermen’s sweaters – but the subsequent Art of Knitting event on 28 April at the Whitworth Art Gallery was a little different. The day provided people with a quick insight into yarn bombing, a practice that really has taken the knitting world by storm.

Also known as guerrilla knitting, the idea of yarn bombing is to rid the craft of its ‘grannies-only’ image and encourage people to look at it as a form of protest, a way to beautify the world, a legitimate art form or a means of taking ownership of public spaces. This was part of a discussion instigated by artist Lucy Burscough at the start of the session, who took attendees on a whistle-stop yarn-bombing tour. Burscough introduced them to the likes of Magda Sayeg – widely acknowledged as being the godmother of guerrilla knitting, whose works include the knitted bus in Mexico and some knitted stairs in Sydney – and Theresa Honeywell, who knits to challenge gender stereotypes.

With the slideshow done the workshop moved on to give people a chance to test out their own skills, encouraging them to look at famous works of art to see how these can inspire knitting. Eight pieces had been selected by the gallery – including Francis Bacon’s portrait of Lucian Freud and a seascape by Turner – to engender a bit of creativity. As Ed Watts, adult programme coordinator with the Whitworth Art Gallery, suggested, the Turner painting could well benefit from the addition of a little woolly boat, while Lucian Freud might look a little more dapper with a knitted moustache. 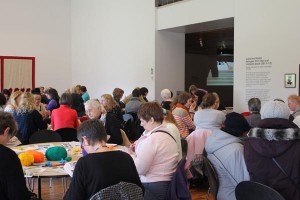 Knitting patterns were provided to cater for all abilities. Of the 90 or so people in attendance, many were beginner knitters, so there was no need to panic if ‘stranding’ and ‘colour-work’ were new concepts, particularly since novices were sat next to those with a bit more experience who could be turned to in case of purling emergency.

This, Mr Watts explained, is one of the key aims of the project, saying, “We get a good mix of levels, so we tried to flag up people with more experience and buddy them up with beginners. The feedback after the event was really positive and it was our biggest workshop so far, with the most attendants.”

If The Art of Knitting’s intention was to revolutionise people’s perceptions of this traditional pastime it was a resounding success. As the one man who came along to try his hand at knitting observed, he had “no idea knitting was so cool”.

To get involved and pick up a few new skills, head to the Gallery of Costume on 26 May where you can learn all there is to know about one of the most popular techniques for knitting intricate and colourful patterns– Fair Isle.