For three years Manchester City Council have been persistently trying to legally restrict the rights of pedlars in the city. They were delighted then in early April when the Manchester City Council Bill squeezed through the Houses of Lords and Commons just before Parliament was dissolved. Pedlars have been fighting the legislation for years and are still battling hard.

A pedlar, in the lyrical words of the 1871 Pedlars Act, is “any hawker, pedlar, petty chapman, tinker, caster of metals, mender of chairs or other person who without any horse or other beast bearing or drawing burden travels and trades on foot and goes from town to town or to other men’s houses carrying to sell or exposing for sale any goods wares or merchandise or …offering for sale his skill in handicraft.”

While they belong to a massively diverse community, pedlars have their own cultural identity and traditions of which they’re fiercely proud. They’re generally self-employed, trying to supplement other income or retirement funds. Many started as a way out of unemployment or low-skilled work – something pretty important nowadays.

If you’re over 17 you can apply for a pedlar’s certificate from the local police station. It costs just £12.50, lasts a year and allows you to legally trade anywhere in the city, subject to certain conditions. Being able to set up cheaply and legitimately has proved invaluable for budding artists, craftspeople and other young entrepreneurs for the past 140 years – the founder of Marks and Spencer’s actually started as a simple pedlar!

The fight against the new legislation has been going on since its inception. Those opposing the Bill have won some major concessions, getting rid of some of the most draconian clauses. These included one which would have let council officers impose £300 fixed penalties on so-called ‘offenders’ and another which would practically restrict pedlars to being door-to-door salespeople.

There are four more bills to be heard by the Parliamentary Select Committee, but thanks to pedlars’ opposition a reported 50 councils have dropped their interest already. 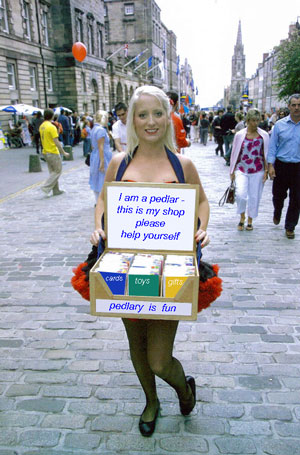 But the Manchester City Council Act 2010 has still made it very hard for pedlars to sell their goods and services on the streets of the city. According to Altrincham-based trader David Murphy, there are now “conditions for a pedlar to work in Manchester’s streets that will be difficult to apply, and will involve the council spending more money and take away the right of pedlars set out in the 1871 Act.”

The Act allows council and police officers to seize a pedlar’s goods and “any receptacle or equipment being used by that person” if they reckon an offence has been committed. An offence like not moving at least 200 metres every five minutes, or returning to the same place within 12 hours.

So why exactly has the Council – which loves to talk Manchester up as the ‘entrepreneurial city’ – been pushing so hard for such restrictive new powers?

Research by Durham University showed that councils across the land see “both certificated and uncertificated itinerant traders as a nuisance, and wrongly and pejoratively refer to both groups as simply ‘pedlars’. Enforcement activities tend to be similarly indiscriminate in targeting legal and illegal pedlars”. According to Professor Barry Hough, Professor of English Law at Bournemouth University, “There is without doubt a powerful and organised lobby against pedlars…[operating] both at national and local level.”

The head of the Local Government Association said of pedlars in 2008, “[they] operate in packs, sometimes linked to criminal gangs, obstructing passers by and using intimidating and threatening behaviour.” Seriously.

The academic research seemed to point to quite the opposite, finding the “vast majority” of people said their “experience with pedlars had been positive… No respondent indicated that they thought pedlars should be banned from trading in the streets.”

Not the view of Manchester’s political masters though. Acting Council Leader Jim Battle was elated last September when John Alesbury – who had a pedlar’s certificate – was ordered to pay £700 for selling woolly hats and scarves from a cart on Market Street. He parroted the familiar mantra of “illegal street traders” undermining “legitimate traders who are struggling now more than ever before” and causing “obstructions on busy streets”.

“We will [soon] be able to deal effectively with illegal street traders who sell shoddy, counterfeit and sometimes dangerous products, while causing major obstructions to emergency services on our busiest streets.”

She apparently isn’t aware that pedlars often buy from the same wholesalers as the High Street shops, or that they voluntarily carry products which are CE labelled – a certified mark of quality assurance – and carry manufacturer’s names and addresses on them. Still, she continued:

“It will also mean hard working legitimate traders will no longer have their efforts undermined by people who think they can get away with turning up on our streets with the intent of deceiving Manchester people.” 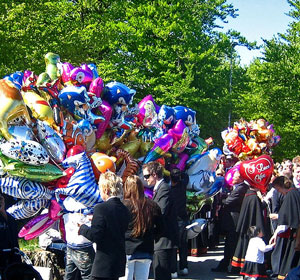 Rosin also wished to “thank Manchester residents who have lent their support to this campaign”. It seemed best to ask her who exactly these residents were – there’s no evidence of a consultation on the Council’s website, and judging by the Durham research it seemed unlikely there would be many. Perhaps it’s the High Street stores – those poor and persecuted “legitimate traders” – who are really so worried about the guy outside selling woolly hats?

She denied this, but did say to “bear in mind that many of the high street stores also invest considerable sums of money in their brand.”

Regarding the “residents who have lent their support” Rosin certainly had a novel argument to back this up, but by anyone’s standards it’s quite a stretch of logic.

How much has the pursuit of this law cost the Council (and local taxpayers) on top of more than £100,000 paid to Clarkson of Sharpe Pritchard for them to argue to the Select Committee – misleadingly as it turned out – that pedlars legally had to trade while in “perpetual motion”? It’s probably quite a lot, but Ms Rosin declined to comment on this, so we’re waiting on the results of a Freedom of Information request instead.

What we do know, thanks to information obtained by the Pedlars Information and Resource Centre, is that during the three years up to June 2009 Manchester City Council spent less than £10,000 on prosecuting 11 illegal street traders. That’s less than one tenth of what it cost to lose a legal argument in the Select Committee!

The battle will go on, probably in the courts. The Joint Committee on Human Rights has already recognised that the bills “may raise human rights issues which are worthy of further scrutiny”. One thing for sure is that the pedlars won’t give up any time soon – it’s their livelihoods which are being systematically trampled on.

This is an edited version of an article which first appeared on Now Then Manchester – a free magazine featuring independent art, music and trade

For more on the UK’s pedlars and those campaigning against the new laws, check out www.pedlars.info