This Saturday, Urbis’ pop culture exhibition centre will close its doors for the last time. The iconic building is due to re-open in August 2011 to house the National Museum Football, relocated from its former home in Preston. Debates over which guise is more interesting, profitable or “good for Manchester” have missed a vital point: deciding between the two was never necessary. “Costs” are not to blame. The Council are freely choosing to close a public, community-integrated and increasingly celebrated space. 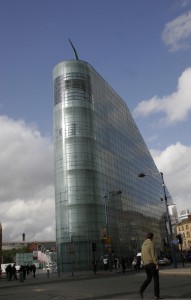 The move only highlights their lack of concern for accessible arts and local provision. Their Executive Report on the subject reveals where their priorities lie: “bringing increased visitor spend to the surrounding retail and leisure outlets”.

With 250,000 visitors a year and 2009 recording their best annual trade, the exhibition centre has been growing in stature and popularity. It is not failing. Yet it seems to be the victim of a straight, financially-motivated swap: the Council will channel the centre’s £2 million annual funding directly into the NFM, which they hope will receive 400,00 visitors. There are additional costs involved, however, including £450,000 transportation and storage and an enormous £8 million capital investment to re-fit the building; the equivalent of four years running costs.

Despite their public insistence that the currently loss-making NFM will become highly profitable, the Council have struggled to find external funders to underwrite the sum. Their hoped-for backers, the North West Development Agency, stated last year that NFM trustees should, “make no presumptions about any future revenue or capital support from NWDA”.

At a meeting of city leaders in January, Manchester Council Chief Executive Sir Howard Bernstein admitted that taxpayers may be forced to foot the bill if third party funding could not be found.

£8 million is a striking figure. Countless other city centre buildings could have been refitted for less. Arguably the landmark is perceived as too valuable an asset for Manchester’s new jewel to miss out on. Yet no offer to re-house the existing centre has been made. It will simply cease to be. The money-conscious Council have meanwhile given a £500,000 boost to the Manchester International Festival, additional to its current £2 million funding. The heavily sponsored festival, which lasts just 18 days every other year, is regularly criticised for its lack of local relevance and high-pricing structures. It does, of course, tend to attract tourists with particularly deep pockets.

The NFM will also lose rent income once Channel M leaves. Money will be saved however, as staff cutbacks strip 73 of 110 staff from the payroll, mainly from public-facing projects, undermining the Council’s promise to maintain strong outreach programming. Many workers are bitterly disappointed at the closure and with the redundancy packages they have been offered. The Council is able to set redundancy rates as it controls the building but, because it is administered by a separate group, the Millennium Quarter Trust, staff have never been entitled to Council benefits such as the ‘Manchester minimum wage’.

The Council promises to continue community outreach through football despite similar, better funded programmes already taking place through the Manchester United Foundation and Manchester City in the Community. Arts in the community, however, continues to be seriously underfunded and under supported.

The highly acclaimed RECLAIM project, based at Urbis, is at least set to continue. The project has worked with 12-14 year olds in 15 locations to create Manifestos expressing their aspirations and positive steps for community. Last year it won the prestigious Philip Lawrence Award. The galleries which showcased local and unexpected talents undoubtedly acted as inspiration for the manifestos and will, however, be a resource lost for RECLAIM.

Showcases and commissions for local artists will also be sorely missed as The Best of Manchester Awards come to an end. Family days, Adult Learning sessions and festivals such as Exodus refugee showcase, designed to welcome marginalised and low-income people to the arts, and donation only entry are the kind of local-focused initiatives unlikely to continue at NMF.

The loss of the unique centre should be mourned. While the centre failed to catch imaginations in its early years, a 2005 redesign embraced popular culture: music, fashion, television, even gardening. UK Hip-Hop; The Hacienda; Videogame Nation and the Art of The Black Panthers are among the consistently lauded recent exhibitions. It places Manchester in a global and historical context. Its Sound of Two Cities exhibition, which compared our music history to that of Detroit, Michigan was both innovative and subtly indicting. There is nowhere in the country like it.

The closing show, Urbis Has Left The Building, strikes a depressing note. As one visitor reflected, “I’ve seen some great things here but this look back only highlights the great future shows that we’re going to miss out on”.

* An earlier version of this article contained a factual inaccuracy concerning the RECLAIM project. Thanks to Jo for pointing out this error.