Paralympics games sponsor Atos was accused of profiteering from life and death situations by disability campaigners in Manchester yesterday, as a week of protests against the company was launched. 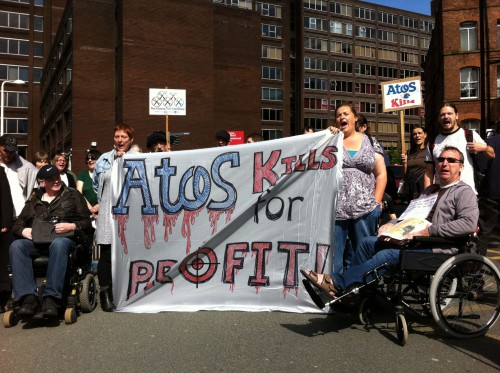 Up to 50 protestors blocked the road outside the Manchester offices of the firm, which is paid by the government to assess whether people on disability benefits are fit to work.

Atos and the Department for Work and Pensions have been mired in controversy over their “work capability assessments”. Disability rights activists say the “tick box” tests are degrading, not based on medical evidence and unfairly denying benefits to people with severe impairments.

In June GPs at the annual conference of the British Medical Association demanded that the government scrap the assessments “with immediate effect” and replace them with a “safe” system which did not harm “some of the weakest and vulnerable in society”.

Former teacher Colin-Roy Hunter, who left work due to chronic illness, told Mule he was “petrified” of being summoned for an assessment. “I had to go to the GP to get anxiety tablets to try and calm me down because I’m petrified of the little brown envelope coming through the door”.

“I fear the postie coming and I love the postie, he’s one of the few people I see in the day, he checks up on me, but I fear the letterbox and that any brown envelope could be the one. I shouldn’t have to live in fear all the time, we’re supposed to be a civilised society”, he said.

“The reason I’ve come today is because most of the people I know who are disabled can’t come”, he added. “I’m one of very many other people, I’m not here for myself. I’m here for the people who would like to be here if they were well enough.”

Hundreds of thousands of people who have undergone the assessments have successfully won appeals after being found “fit for work”. According to DWP figures 36 per cent of people found fit for work between October 2008 and February 2011 appealed their decision, with a 39 per cent success rate.

Recent figures show the overall number of all successful appeals at 32 per cent, although the Citizens Advice Bureaux estimates this rises to 80 per cent when appellants access specialist advice and representation.

Similar demonstrations occurred across the country, as the company came under fire from disability rights campaigners, Disabled People Against Cuts and UK Uncut for its sponsorship of the Paralympics. On Monday protesters in London hosted a mock‘opening ceremony’ for the multinational, and a week of actions are planned.

Protest organiser Mark Krantz argued the assessments were “not about disabled people, what they can do and what they can’t do. They start off assuming too many people are claiming disability benefits and then they say they’ll fit the numbers around that.”

He added, “In a sense Atos is fit for purpose because what the Tories want is to drive people off benefits in order to get more money that they can give to the bankers who have caused a huge financial crisis in the country.”

Figures obtained by the Daily Mirror in April revealed that 1,100 people between January and August 2011 had died after being placed in the “work related activity group”, where claimants receive a reduced rate of benefit for one year and are then expected to find work.

Hunter claimed the appeals process placed often severe strain on people in ill health. “It’s not like going to an office it’s a proper court, and for some people that’s the first time they’ve ever had anything to do with the jurisprudence system. That’s a heck of a lot of stress… people think that if you’re involved with the justice system you’ve done something wrong.”

Recorded incidents of hate crimes against disabled people have increased in recent years, and Hunter said he himself had experienced a hardening of attitudes. “Most of my neighbours have been fantastic but it makes you scared to go out on the main road because you see people and you get gestures from cars when they’re driving at you, just because I’m in my wheelchair,” he said. “That wouldn’t have happened two years ago before all this media, ‘scrounger’ rhetoric”.

An Atos spokesperson said, “We fully respect people’s right to protest and understand this is a highly emotive issue.

“We do not make decisions on people’s benefit entitlement or on welfare policy but we will continue to make sure that service that we provide is as highly professional and compassionate as it can be.

“At Atos we have proudly supported the Paralympics Movement for a decade. We hope people will view the Games, as we do, as an opportunity to celebrate sporting achievement.”

A government spokesperson said, “It’s disappointing that a small number of organisations are protesting against sponsorship of the Paralympic Games, which is an opportunity to showcase the talents of disabled people and act as a catalyst for our sporting talents of the future.”