The Working Class Movement Library (WCML) in Salford hosts a free mini film festival to mark the 30th anniversary of the miners’ strike. ‘Last Cage Down’ consists of three documentaries themed around the miners’ strike and runs from 12 to 14 May. 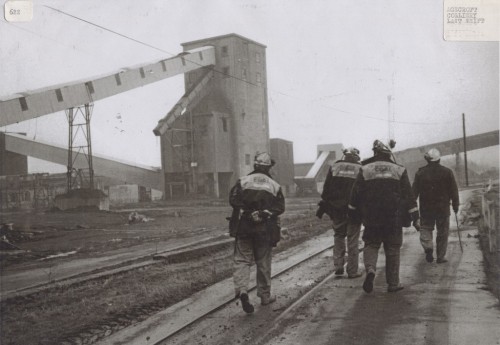 Miners at their last shift at the Agecroft Colliery in the Irwell Valley. Photo by Mary Lorraine McHugh, courtesy of Salford Local History Library

The opening film on Monday will be ‘The Road to Drumleman: Memories of the Argyll Colliery’, telling the story of brotherhood at the Argyll Colliery (1947-1967). When her father, a former shot firer at the pit, died, filmmaker and artist Jan Nimmo sought out the men who had worked alongside him to piece together the story of Scotland’s most remote coal mine. Nimmo’s husband will introduce the film.

The French film ‘The Last Strike’ (La Dernière Grève) is shown on Tuesday. A French TV crew came to St Helen’s in 1984 and made a film that focuses on the solidarity of Lancashire miners and the key role women played in the strike. It has been described as one the best films made about the strike. Dave Douglass, a National Union of Mineworkers (NUM) activist known as ‘Danny the Red’, will introduce the film and talk about his experiences of the strike after the screening.

Wednesday’s film ‘Last Pit in the Valley’ is part of the Salford-based Irwell Valley Mining Project and tells the story of the Agecroft Colliery which existed until the early Nineties. Situated just three miles away from Manchester city centre, the pit disappeared off the face of the earth after its closure. People from the Irwell Valley Mining Project will introduce the film and explain the importance of keeping the memory of Salford’s last pit alive.

WCML manager Lynette Cawthra organised the library’s second ever film festival: “We wanted to keep the momentum going and organise another festival after the first one last year was a success.”

In addition to the films, on Wednesday 14 May at 2pm Mark Metcalf from the Orgreave Truth and Justice Campaign will talk about the campaign’s determination to seek truth and justice for the miners victimised by the police at the Orgreave Coking Plant, South Yorkshire, during that key event in the strike in June 1984. The free lecture is the first in a new series of Wednesday afternoon talks.

Cawthra says: “It’s important to us that the events are all free, as are the majority of our events. We want people to know that we’re here, open for them to use and want to spread the word as widely as possible.”

The film festival is leading up to the Manchester After Hours event at the library on Thursday: ‘Testing the Echo – is that Paul Robeson singing on the stairs?’ is a free event on 15 May from 5 to 8pm. Tayo Aluko, acclaimed interpreter of Robeson’s songs and life, muses on extraordinary tales such as Robeson’s links with Welsh miners, while historical ballad singer Jennifer Reid will perform broadside ballads on mining and industrialisation. Visitors are invited to experience the amazing acoustic of the library.

Find more info about the film festival here. All the screenings start at 7pm, are free and include free popcorn.