Don’t be poor and don’t be disabled: council signs off on new raft of cuts

Not even Manchester’s Liberal Democrats were willing to defend the latest round of government cuts to council tax benefit, as Manchester City Council’s executive met for the final time before the summer. 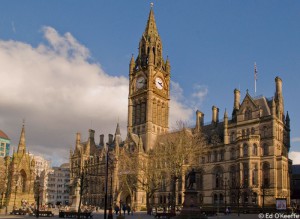 The council’s governing body agreed to proposals to manage a vicious government squeeze to council tax benefit which will hit a quarter of the city’s households next April, and to demand that disabled drivers pay £10 for parking permits from 1 August.

The most disquieting part of the meeting came when the proposals to manage the cut in council tax benefit passed on by the Coalition government were put forward. The benefit is received by one third of Manchester’s households and responsibility for setting their own benefits scheme will be passed downward to local councils.

The government will slash funds for the benefit by 10 per cent, however, with councils left to make the remaining cash cover all need in their area. Mandatory government protections for certain groups such as pensioners, who make up 30 per cent of Manchester claimants, will take the cost on working age residents who are unemployed or on low incomes up to at least 15 per cent.

Council finance executive Jeff Smith argued the reform represented “localisation of risk to local authorities and localisation of pain to residents”, and claimed the council’s proposals were “the least worst scheme we can get”. Fears exist that the number of claimants will pressure a strained system as absolute unemployment rises throughout the recession and cuts and reforms to housing and incapacity benefit push people deeper into poverty.

Use of new powers to relive some of the burden by charging more for empty properties and second homes are being considered, although officers have some concerns regarding the “impacts” on wider regeneration and property development”.

Liberal Democrat councillors were also nervous of the scheme, with Lib Dem leader Simon Wheale admitting he didn’t “disagree too much” with Smith’s assessment. Wheale claimed that although local control over council tax was “a good idea”, he added “what spoils it is the 10 per cent cut” and said he would be working with others to lobby ministers against the scheme as it stands.

Bickering between Labour and Lib Dem councillors broke out over the scramble to sort out the city’s chronic shortage in Primary School places, which face a 7,000 shortfall over the next four years – equivalent to needing 30 new schools – as Manchester’s population rises.

Urgent expansions to 12 new schools were passed, on top of 34 which have already been enlarged since 2008, and Abraham Moss secondary school will be redesignated to take in kids aged from 5 to 16. As many as 25 children, 22 of them in North Manchester, are still waiting for a school offer in September.

Lib Dem deputy leader Mary di Mauro accused the council of complacency, arguing “we’ve known this was coming for years” and said the issue should have had “clearer political leadership from the beginning”. Council leader Sir Richard Leese said previous official figures derived from the last census and used to predict primary school places were 30,000 short of the actual figure, and claimed it was “a nonsense” to say figures could be accurately predicted “with that margin of error”.

Further criticism was raised over the decision to sell a £120,000 Longsight house to housing association Eastland Homes for the nominal price of £1. Renovation costs of £40,000 are needed to bring it up to the required “decent homes” standard for social housing, and Di Mauro questioned why it could not be sold for £80,000 to add much needed cash to the council’s coffers.

Arguably the cash is needed given it would bring in enough to cover the money raised by the hike in disabled parking passes, but Leese said the council wished to dispose of it to reduce the chance of the property ending up on the private market. If the property was bought for private rent, he said, the family who previously lived there and who he claimed “caused extreme disruption” may rent it back.