The English Defence League’s “LGBT” division, who have cancelled a planned protest in Manchester today, has posted a link to the “Norwegian Defence League” on their Facebook profile on the same day a far-right Christian with alleged links to the EDL massacred at least 91 members of the Labour Party in Norway.

The post, encouraging people to “join and give your support” for the Norwegian League, was made at approximately 8pm on Friday, when it was widely assumed in the media that it was the result of Islamic terrorists. This morning, when it was revealed to be the work of a far-right Norwegian, Liam Wood, the LGBT division’s organiser, wrote: “Terrorism is Terrorism no matter what side you are on. May our thought [sic], our wishes and our prayers be with the families of the victims on this terrible day. Regards The Wood”. 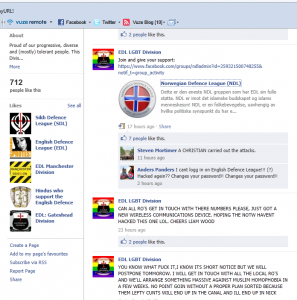 A screenshot of the page this morning. Click to see a larger image.

The suspect in the massacre, Anders Behring Breivik, has been reported as a racist opposed to immigration and with strong Christian beliefs. He reportedly has expressed admiration for the EDL and a desire to emulate them, claiming to be “very impressed with how quickly they have grown”, also referring to holding discussions with them and another group, Stop Islamification of Europe.

The existence of such links was further suggested by a post made by an EDL member on a discussion forum, encouraging others to “keep sensitive information off the board” and claiming that “anything that ties us to him will be all over the news and give us terrorist links for sure”.

The Norwegian Defence League’s Facebook profile claims that, “This group is fully supported by the English Defence League and is the only affiliated NDL.” The membership list includes numerous people with English names, and some with profile pictures of English flags entwined with Norwegian ones. In posts made on Document.no between 2009-10, Breivik claimed one of his key long-term goals was “creating a Norwegian EDL”. It is unknown if he was involved in the foundation of the NDL.

Following the NDL’s first protest in Oslo in April, supporters wrote: “the important thing was that the demo took place.  It was a small demonstration, but we must all remember that the highly successful English Defence League began with only a handful of highly motivated individuals.”

The LGBT division was planning on leafleting this afternoon on Canal Street, in Manchester’s gay village, but the event was called off when it became apparent that opposition to their presence would be great. Wood wrote yesterday morning: “NO POINT GOIN WITHOUT A PROPER PLAN SORTED BECAUSE THEM LEFTY CUNTS WILL END UP IN THE CANAL AND ILL END UP IN NICK[sic]”.