This Friday 28 January a group of artists will converge on an old mill in Salford and throw cherished works on a bonfire. Act of nihilism or political statement? MULE spoke to one of the organisers to find out. 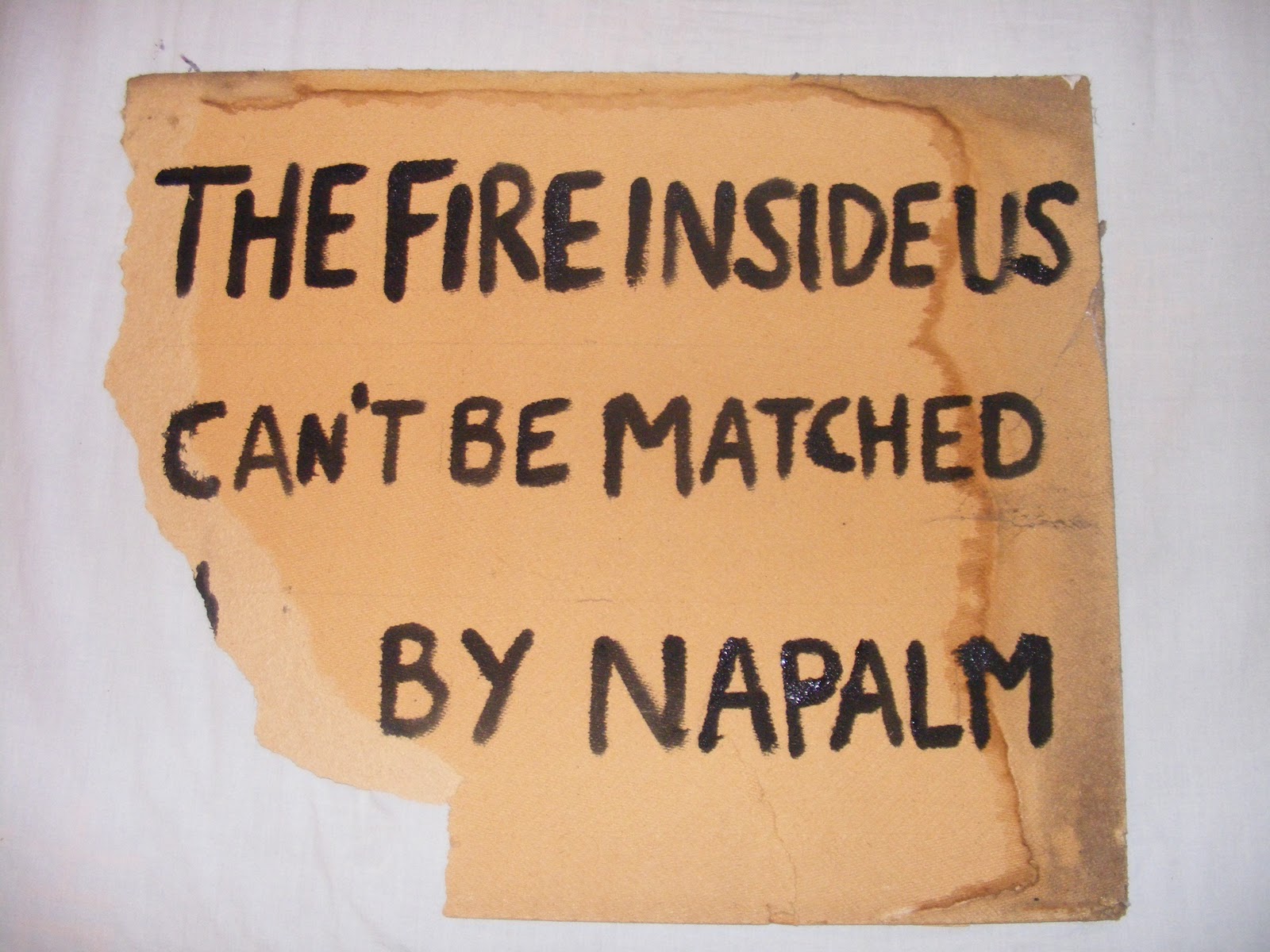 The Artists’ Bonfire, taking place this Friday 28 January at Islington Mill in Salford, is an event ‘for artists by artists’ and is open to anybody with a thirst for – or simple curiosity about – an evening of burning art.

Artists from the city have been invited to submit a piece of work along with a paragraph of writing describing their thoughts, feelings and ruminations over what the process of destruction means for them. But this will be more than a night of simply throwing paintings on a pyre; so far the pieces pledged include a red wax skull, clay butterflies, illustrations and a sound installation through which poems are ‘blown’.

Organisers say the act is an exploration of the personal relationship of an artist with their work which seeks to challenge our perceptions of the value of art – especially at a time when funding for the arts is under grave attack – as well question the role assigned to art from a radical perspective.

Co-organiser Rosanne Robertson spoke to MULE of where the inspiration came from: “I was with [co-organiser] Jennifer McDonald at a show which included a series of replicas of t-shirt worn during past protests such as the famous Calvin Klein logo incorporated into a slogan in support of the Liverpool Dockers’ Strike. The work was to be interacted with by swapping your shirt for one of the replicas. 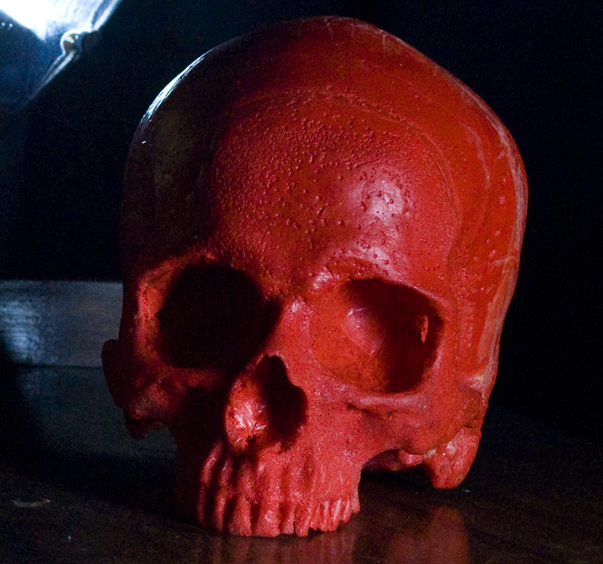 “We both commented on the feeling of liberation, and Jennifer said that it felt fitting that the exchange coincided with something that she and fellow artists were doing that evening – burning art in the back yard.

“Something about that shared experience and the thought of gathering to burn art made me say “wouldn’t it be good if every artist in Manchester had the opportunity to do that together?”

You would be forgiven for feeling at least slightly bemused by the thought of somebody wantonly destroying the fruit of their labours – especially when it is the source of their livelihood. When asked whether on a practical level this could be self-defeating for a young artist struggling to make a living from their work, Rosanne disagrees:

“Not if it brings a different perspective to an artist’s practice. Artists usually have less sentimentality connected to their work than might be expect, which is one of the interesting things about the bonfire as it looks at the value of art through the eye of the artist.

“The bonfire will do its job in terms of destruction but it is up to the artist to decide whether it can lead to something new such as an idea, a work of art, connection or piece of information.

“The Manchester Artists’ Bonfire is not about practicality.”

Nevertheless the act of engaging in deliberate destruction of art may carry with it a whiff of irony – even hypocrisy – given that event’s primary target of criticism is the Coalition’s philistine approach to arts which has seen arts funding savagely slashed. 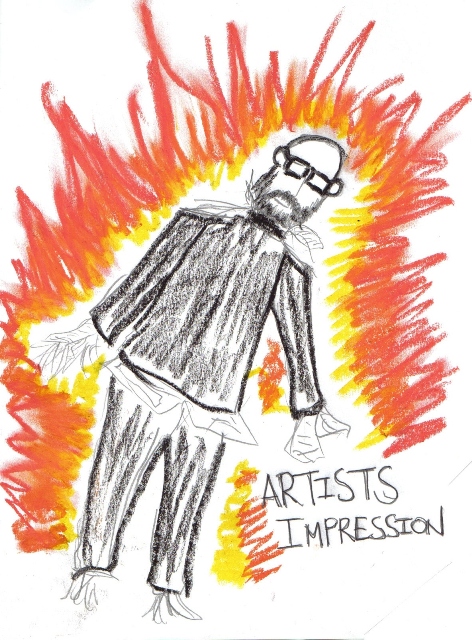 Yet for artist Louise Woodcock the burning of her work is a form of self-sacrifice which ultimately symbolises an act of defiance against such measures. This she expresses head-on in her provocative pledge accompanying Vanitas, a red skull fashioned from wax:

“I will destroy in order to create, to make art no matter how throttled we become through poverty: by any means necessary.”

While condemning the detrimental impact the cuts will have on aspiring artists, Louise believes that their effect could lead to a back-to-basics approach and be the source of inspiration.

“Cuts to public funds will make art and artists in this country suffer, but [this] … could reconnect us with our instinctive creative ‘will’. We may become more in touch with what really moves us irrelevant of monetary concerns. Poverty can inspire, but this is not to condone the impoverishing of artists and the lack of respect this culture has for us as the cuts demonstrate. I hope that we realise we can overcome these obstacles if we maintain our individual and collective passion to create and spur each other on, if we keep on keepin’ on.”

On the question of whether the bonfire could be interpreted as a bonfire of their own vanities, a narcissistic act of self-indulgence, Rosanne Robertson turns to the implicit political protest of the act; and the potential for resistance which could be ignited by the flames and acrid smoke of Friday’s conflagration.

“I think that artists should be more vain and self-indulgent if it means there are more who are willing to say “what I do is important, I will stand up for it”. I don’t think this is an indulgence of the self but that it is definitely an indulgence of our practice. The question is always what does this art mean to the viewer, the audience, the community, the public? But we have to know what it means to us before we can expect anyone else to appreciate it. And perhaps we also need to know what we are prepared to do to defend it.”

The 'bonfire' by students at Parliament Square back in December

Indeed, this political undertone of the event comes out on many levels and is referred to explicitly in the tracts of many of the artists involved. In this respect the function of the mass burning appears to be an oblique way of forcing artists and the public to reconsider their relationship with and the value we assign to art, at a moment in time when its importance in society is being degraded by the government.  Whether the immolation really is a ‘defiant symbol of dissatisfaction intended to act as a catalyst for change’ as the organisers hope is for the spectator to decide on the evening; as is the more fundamental question of whether such a spectacle can rise beyond the spectacular to stoke the flames of real resistance to the brutal cuts.

For those who remain unconvinced or perhaps confused by the ambiguous message beneath the incendiary intentions of the organisers, you may have just hit the hammer on the head – or, in the words of Rosanne Robertson:

“[With the bonfire] we aim to extend questions rather than give an answer.”

For more info, go to: http://manchesterartistsbonfire.blogspot.com/