Friends and family of Anthony Grainger led a vigil yesterday lunchtime in Piccadilly Gardens, Manchester city centre to remember all those who have died in custody and to press for justice over the 36 year old father’s death after he was shot by a Greater Manchester Police (GMP) firearms officer. 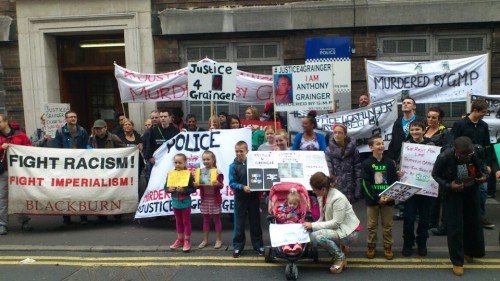 Over 100 supporters gathered in the city centre square for the peaceful protest before walking to Bootle Street police station. Campaigners bore placards marked “Justice 4 Grainger” and “murdered by GMP”, and speakers at the tearful rally included surviving family members of others who have died while in contact with the police.

Grainger, born in Salford and living in Bolton, was shot dead in the chest by a bullet from a sub machine gun while sat in the front seat of an Audi in a car park in Culcheth, near Warrington at around 7pm on 3 March. Immediately prior to Grainger’s death police had shot out two of the car’s tyres and fired a CS gas canister by hand into the vehicle.

No firearms or other weapons were found at the scene and the officer who fired the weapon has since been interviewed under caution by the Independent Police Complaints Commission. The Crown Prosecution has said potential offences to be charged with could include murder and manslaughter.

GMP have stated that armed officers approached what they say was a stolen car with false number plates as part of a “pre-planned operation”. Two men sat in the car were arrested at the scene and later charged with conspiracy to commit robbery, alongside another man arrested the next day.

In an emotional speech Grainger’s mother, Marina Schofield, told protestors her son had been “executed” and hoped that the family would know by the end of July whether any officers involved in the incident would be charged. “This has left us devastated as a family. Our lives will never be the same. I cry every single night knowing what they did to my son”, she said.

Anthony Grainger’s surviving partner, Gail Hadfield-Grainger, said she had called the vigil to raise awareness if the case and keep up pressure to ensure that the police are held to account for her boyfriend’s death. 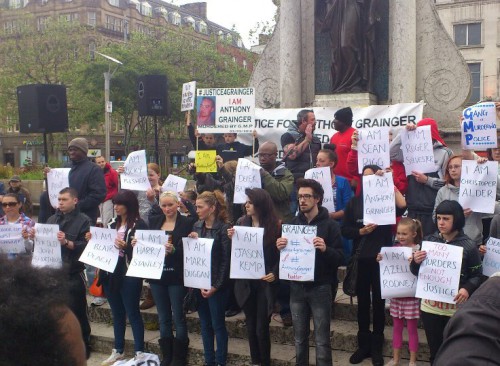 At least 333 people died while in police custody between 1998 and 2010, according to a 2010 report by the Independent Police Complaints Commission. Out of those cases, no officer was ever successfully prosecuted.

At the rally protestors held a one minute silence for people who have died during contact with the police, holding placards bearing names including Mark Duggan, Smiley Culture, Christopher Alder and Anthony Grainger.

“I’ve met many families that are going through the same thing, fighting against the police”, Hadfield-Grainger said, explaining that despite her fears over a lack of accountability “it only takes one case to change everything.”

Hadfield-Grainger said the police were in her view “not above the law. If you feel like you should be able to shoot an unarmed man, or any man, than you should face the consequences”, adding that “the next time they go out with a gun, if they think there’s going to be a consequence straight after, they might not be so quick to fire.”

Also present at the vigil was Janet Alder, sister of the ex-serviceman Christopher Alder who died after being taken into police custody at Queen Gardens Police Station, Hull in 1998 following a night out. No one was ever convicted for his death, despite a coroner’s verdict that Alder was unlawfully killed and released CCTV footage that showed officers laughing and joking while he gasped for air on the floor.

Addressing the rally, Alder said “I’m here today to support the family of Anthony Grainger because I know what a hard battle it’s going to be for them to find justice.” She warned that her family had never received justice in the years since, adding “this family needs you to support them because it is a long road. Many people are there for a moment of time while it’s all up in the air but believe me, it could be any single one of us.

“My brother never got into trouble. He went to a nightclub and went for a drink. It could be anybody. It seems to be, I believe, that there’s a law in this country that says police officers are never to be prosecuted no matter what. This law needs to change, but it can only be changed by the people. ”