FC United gets thumbs up for Newton Heath stadium 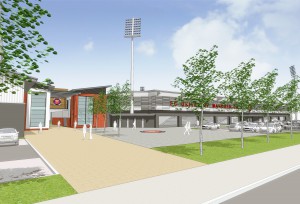 A sketch of the planned Ten Acres Lane site

The club can now go ahead with building the 5000-capacity community stadium as soon as the full £3.5 million funding for its development is secured, after permission for its application was granted by the Council’s planning committee on Thursday 25 November.

Co-operatively owned and democratically run by its 2000 members, the club was founded in 2005 by breakaway Manchester United fans angered by the corporate direction of Old Trafford following the Glazer takeover. Since its formation the semi-professional club has won plaudits both on and off the pitch, recently defeating League One side Rochdale AFC in the FA cup and winning the UK’s 2009 Co-operative Excellence award.

Despite this it has so far been forced to rent its stadium from Bury FC and club members are eager to build a home ground to call their own. The Ten Acres Lane location holds special significance for the club, with Newton Heath being the original home of Manchester United.

Newton Heath lies within the top 5% of disadvantaged areas in England and Wales for income, employment, health and education, and the club intends to use sport to work with the local community in developing their area. The club’s community use plan states the intention of expanding the already existing facilities at Ten Acres Lane, taking over the running of the site from Serco. It is proposed the grounds will include a 3G Astroturf pitch, multi-use function rooms and a regeneration of the existing sports hall for local use, in addition to the main stadium.

FC United’s recent community work has included school holiday activities in primary schools across Greater Manchester including Briscoe Lane in Newton Heath, regular coaching sessions for refugee men in Bury alongside Bury Solidarity Group and supporting care-leavers to re-enter work and education in partnership with Bernardo’s. The club’s strong track record in community development was praised by planners, who said the development “would introduce into the area a community-based football club that has working with local residents, schools and community groups at the core of its constitution.”

Club general manager Andy Walsh said he was “thrilled” by the decision, adding “this is a massive step forward for our aim of being in our own ground within two years and it is a major vote of confidence in us as a club. So much work has gone into getting us to this position and we’re very grateful for the council’s support.”

A ‘community share’ scheme, allowing club members to purchase £1 shares for between £200 and £20,000, was launched in September with the aim of raising £1.5 million towards the development costs. The members-only scheme allows individuals to purchase shares in the club with buyers able to expect a small rate of return of up to 2%, with the club also receiving ‘advance assurance’ from the government that the shares qualify for tax relief under the Enterprise Investment Scheme. So far the programme has raised over £600,000, with at least a further £200,000 pledged according to club officials. The share offer is set to close on Tuesday 30 November.

Unlike in the private sector, shares are not freely transferable and do not bestow extra voting rights, will only pay out in keeping with FC United’s constitutional commitments to club development and community outreach and there will be a three-year moratorium on the right to withdraw the shares or receive interest. People who cannot afford the minimum £200 purchase but who would like to contribute have been asked to contact the club, which may be able to offer assistance through credit unions.

A further £1.5 million has been identified in grants and FC United is also aiming to reach £500,000 in donations through the clubs development fund, of which it has already achieved £300,000. Walsh urged members to continue to invest in the club’s future, saying “the onus is now on us to deliver the funding package – without them, we’ll be going nowhere.”

You can find more information on FC United’s share offer at www.fc-utd.co.uk/communityshares