What do you do with your revolution once you’ve got it? This is the question that the Cornerhouse’s latest art exhibition and film season attempts to grapple with. 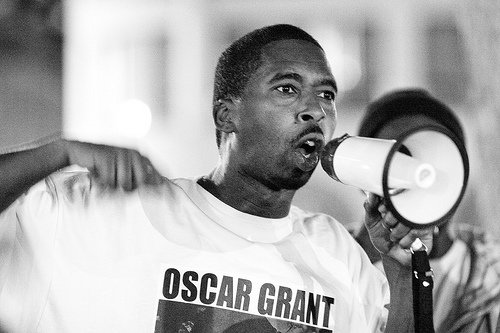 A man at a 2009 San Francisco protest against the killing of police shooting victim Oscar Grant. Photograph: Thomas Hawk

Beyond the heady days of popular uprising and the promises of utopia, how is the difficult process of making these dreams realised (or not), what (or who is) sacrificed and when is the revolution over?

As the Arab Spring slips deeper into tragedy and the memories of Occupy dissolves into fresh rounds of austerity, the need to think through the complex dimensions of revolutions is an important task for society. The exhibition features 11 artists, four of them new commissions, all hoping to help us do that. The exhibition consists of sculpture, film and photography with one noteworthy highlight being Michelangelo Antonioni’s documentary on the Cultural Revolution Chung Kuo, Cina.

Another is a mural on the wall of Cinema 1 by Trust Your Struggle, an Oakland based art collective, commemorating Oscar Grant, who was a fatal victim of racist police brutality in 2009. Although there are some strong pieces in the exhibition, visitors may find some of the work slightly esoteric. In a recent Q&A session co-curator Declan Clarke told the story of being advised at the entrance to the exhibition to not bother with it as “there’s nothing worth seeing up there”!

While the exhibition touches on most continents there is a strong focus on Eastern European and Chinese experiments. These cover the entire cycle of the Marxist-Leninist experience, first grappling with the optimism and social struggles unleashed by the Russian revolution (Tsar to Lenin) before attempting to explain life under these regimes in Antonioni’s film as mentioned above and the visually stunning The Autobiography of Nicolae Ceausescu. Finally, the season attempts to grasp the resurgence of popular power at the collapse of the Soviet experiment. In East of Bucharest Corneliu Porumboiu attempts to tease out the complexities of the collapse of the Soviet Bloc.

At a recent Q&A about the exhibition (where Peter Lalor’s wonderful Incident Urbain recieved a North-West premiere) Co-curator Sarah Perks suggested that we were perhaps still too close to the Arab Spring to see good artworks being produced from it. While the exhibition contains no direct references to the Arab Spring, Anguish and Enthusiasm will be continuing with a selection of Arab films on the topic starting on Sunday 2 June with Winter of Discontent dealing with state repression in Mubarak’s Egypt.

Almost 100 years after the Russian revolution the concept of revolution is still as complicated and enigmatic. The curators of Anguish and Enthusiasm should be commended for tackling such an immense and socially relevant theme. While the exhibition might not be for everybody it offers several approaches onto a topic which, five years into a crisis which began in 2008, is as important as it ever has been.

Anguish and Enthusiasm is curated by Sarah Perks and Declan Clarke and runs until 18 August. For more information head to the Cornerhouse website at www.cornerhouse.org