The masterplan for a dramatic overhaul of St Peter’s Square, including controversial plans to gate off and glaze Library Walk, was rubber stamped by Manchester City Council’s executive on Wednesday. Friends of Library Walk campaigner Morag Rose ventured into the Town Hall to witness local democracy in action, and was unimpressed by what she saw… 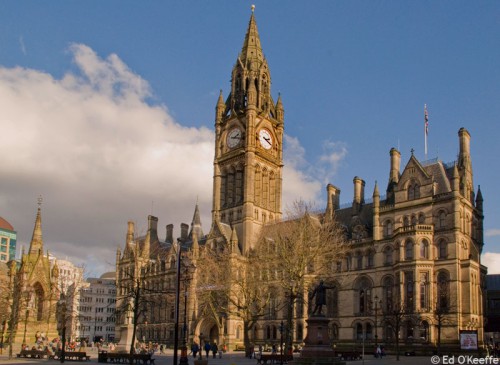 I have tended to avoid Council meetings for many reasons, not least an assumption they would be arcane and dull. However, I have also become aware that engaging with the planning process could well be the most effective way for community campaigns around planning issues to have an impact; too often communities are excluded from decision making processes and have to adopt a reactionary stance battling decisions already made by those in power.

My involvement with Friends of Library Walk meant, therefore, I went to a special meeting of the council’s executive committee which was convened to discuss the regeneration of St Peter’s Square. I knew the public were only allowed to observe but I wanted to be sure I had all the facts about the proposals and how it impacts on our campaign. Although Library Walk is a small pathway for me it illuminates much bigger issues around public space and the rights to the city as well as what heritage means in Manchester, how public money is spent and, of course, debates around aesthetics and architecture.

The Town Hall was built by patriarchal city forefathers to inspire awe not inclusion. In some ways little has changed since their days, although folk like me are permitted to cross the threshold the meeting room does not elicit feelings of welcome – it’s actually somewhat intimidating and simple ways to remedy this are not taken. Observers are placed in rows, the great and the good sit in a square (so several key players have their back to the audience) and there is no indication of who anyone is. Clearly the participants know each other but it would be helpful if there were legible nameplates at the least. The acoustics meant much of the audience struggled to hear clearly what was being discussed.

The business began with Chief Executive Sir Howard Bernstein introducing The St Peters Square frame work as “bringing together independent but mutually supportive initiatives.” It was clear from the start both he and council leader Sir Richard Leese are determined that the work will benefit Manchester and no criticism will be tolerated. Perhaps this is a natural consequence of the same party holding power for 38 years; however I was still shocked how dismissive they were of counterarguments.

Questions and comments were invited and two members of the Consultative Panel spoke expressing “surprise” at the designs for Library Walk and said there was “real interest and enthusiasm for the site” suggesting it is “time to engage” with the community who are “determined to protect this unique cultural gem…and fundamental rights of way.”

Leese began his response by addressing technical issues and so Rachel Hough, partner in Ian Simpson architects, who are profiting from this work, spoke. She said the “brief developed over time” and it had become apparent there was a need for a single point of access to the facilities in the Town Hall. She feels the designs “respect and enhance” the “beautiful historic environment” and views are not lost at all  with the new structure being a “minimal introduction”. 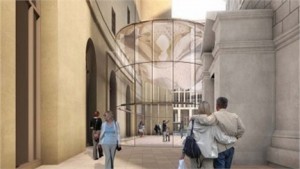 I would like to question this and wonder how and why the original underground link, which has been much lauded, was suddenly deemed inadequate? In terms of lack of damage and impact on a unique space we have letters from many people, and organisations such as The Twentieth Century Society, Manchester Modernists Society and Manchester Women’s Design group who disagree with the architects assessment.

When Leese spoke again I was dismayed at his glib dismissal of criticism. There was also a blatant disregard for logic and fact. He said “there is a lot of misinformation around the campaign that needs to be challenged” It appears to me this is indeed so but it is not coming from The Friends! To continually repeat assertions that public access will not be restricted, sightlines will be unchanged, and the fabric of buildings will not be damaged does not make those statements true: they are contradicted by every plan, picture and report on the proposed changes.

Leese claimed, without evidence, that “a lot of people who have signed the petition can’t have been down it at night”. This is an insulting dismissal of the 1300+ who have taken the time to sign. It was utterly frustrating hearing him talk about us – who he has never tried to engage with – in such a way. His position of power means his words are minuted and become a matter of public record; I had to sit there impotently, knowing to create a scene at this meeting would simply have us branded hysterical wingnuts or somesuch. It was sorely tempting to heckle but, as agreed with colleagues beforehand I had to resist. 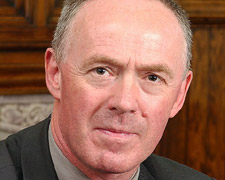 He repeated the statistically unproven idea Library Walk is dangerous; I feel the bigger danger is that to liberty when the response to an attack on a woman is to close the street where it happened. This is a terrifying precedent, especially at a time when (for example) welfare, information and advice and domestic violence services are all under threat of cuts. He also mentioned the odour; I assume he deemed it indiscreet to mention piss in a council meeting. Again, Library Walk is far from the only, or worst, affected area in the city. We don’t oppose improved lighting or street cleaning but we do object to what is the de facto privatisation of public space.

There were no further comments or questions – just two councillors raised issues during the meeting – and Leese said “let’s try and draw conclusions” He also glibly dismissed criticism of the second tram crossing and moving of the Cenotaph and reaffirmed the commitment to a Peterloo memorial. He then returned to Friends of Library Walk and bizarrely compared us (to laughs from the committee) with a typical Lib Dem campaign as “it is not under any threat at all.” Friends of Library Walk are resolutely not a party political campaign and I found this deeply insulting. We have supporters from all parties (including Labour councillors) and none. I am really disappointed that puerile name calling is an accepted part of local political debate.

I would love an open, honest and robust debate about the plans for Library Walk; we have a growing dossier of evidence that challenges them on a range of technical and legal grounds as well as the integral aesthetic and heritage value of Library Walk. It seems impossible to have such a debate when emails are not acknowledged, FOI requests are ignored and there is no public right of reply at meetings such as the one held yesterday. Any suggestions as to how to facilitate this would be welcome and Friends of Library Walk are happy to share our evidence with anyone interested.

My whole experience of trying to interact with local democracy has been like trying to navigate a labyrinth; inhabitants really do use newsspeak and doublethink and refuse to even acknowledge alternative views. There’s an ongoing debate about whether it is better to try and affect change from within or without; perhaps I have been foolish and naive in believing this was worth attempting. I left the Town Hall angry and befuddled but also more determined than ever to fight, using all the available tactics, to try and save Library Walk.