A local journalist is on hunger strike in protest against the UK Border Agency’s handling of his case for asylum. Manchester NUJ member James Fallah-Williams says he is taking the drastic action to expose the “abuse of power” by the government body, which he accuses of misleading his MP, shadow education minister Andy Burnham. 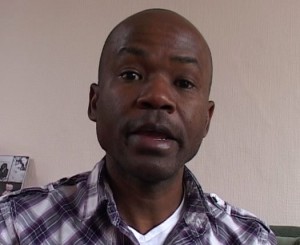 Fallah-Williams, who has worked and studied in the UK for 13 years, says he has been left in “immigration limbo” for the last four years due to “institutional vindictiveness” from the UKBA. He is demanding a proper review of his case, earlier reported on by Manchester Mule in March, and that the government answers questions put to it by Burnham.

Originally from Sierra Leone, Fallah-Williams left after conflict spread to the country from neighbouring Liberia and entered the UK on a student visa in 1998. While resident in Britain he became a target for death threats after he wrote articles criticising politicians in his home country such as former presidential candidate Solomon Berewa.

Once his student visa expired in 2007 the journalist applied for indefinite leave for remain, which was rejected despite a grant of six months leave to pass his “Life in the UK” test. Confusion emerged after his subsequent claim for asylum in 2008, when despite being told that an initial error had been made on his refusal of leave to remain he was housed in Leigh and left to await a decision on his asylum case, which was rejected in November 2010.

While waiting for a decision on his case Fallah-Williams took up paid employment as a caseworker at Manchester Refugee Support Network, a local charity, in April 2010. Yet suspicions were raised when his asylum claim was turned down shortly after a family he was working with won a landmark case at the Asylum Support Tribunal Court in London.

His work permit was revoked eight days after the hearing, despite assurances made to Leigh MP Andy Burnham that it would not be, and 19 days later his claim was refused on the grounds that he overstayed his student visa and spent 12 days in the UK illegally between 31 May and 12 June 2007 – a time between the expiration of his visa and the meeting date he was given to discuss his claim for leave to remain.

Further to this incident, the UKBA sent a letter to Burnham in December 2010 incorrectly stating that he was not resident in the UK between 1998 and 2001 – which he disproved by showing the MP his degree from a British university – and that he was granted “entry clearance” in 2001. Fallah-Williams says the UKBA later apologised to Burnham for the misleading information.

Following representations from Burham the UKBA suggested the journalist re-apply for leave to remain. Fallah-Williams did so in March, and his claim was refused one month later. He now says that the UKBA are refusing to answer questions from his MP and his legal representatives.

Manchester’s NUJ branch said they were “angry and dismayed that one of our members has reached a point where he believes he has no choice but to take this action.”

A spokesperson for the Manchester NUJ Branch Committee added: “James is an active member of our Branch and respected by all his colleagues. He is a rational, intelligent and principled person who has become so frustrated with the UKBA’s handling of his case that he has decided a hunger strike is his only option.

“We want the UKBA to abide by its responsibility to consider the case properly and to treat James – and all other people seeking asylum – in a fair, just and humane way.”

You can sign a petition for James here and AT 10.30 am tomorrow Wednesday 10 August supporters are holding a vigil outside Dallas Court Reporting Centre, South Langworthy Road, Salford M50 2GF (the nearest tram stop is Broadway)

His full statement to the UKBA reads:

I am writing to inform you that I am now on hunger strike since the 1st of August 2011, as a result of the way the UKBA have handled my immigration case.

I am taking this action in order to expose the institutional vindictiveness and abuse of power, and the utterly pernicious and pervasive form of bureaucratic lie and deceit designed to deliberately and collectively criminalise and denigrate minorities.  If this were not the case, then the UKBA is suffering from a very fistulous decay that is characterised by grotesque incompetency and inefficiency.

I left Sierra Leone through the help of British missionaries in 1995 at the height of the civil war, living in the Gambia before arriving in the UK in 1997/98. Due to the UKBA’s mishandling of my immigration case, I have been trapped in a limbo for the last four years. In 2008, I applied for asylum as a result of my journalistic and human rights work.

In April 2010 I began working for Manchester Refugee Support Network (MRSN). However, in October 2010, my permission to work was revoked by the UKBA—8 days after one of my clients at MRSN won a significant test case against the UKBA through the Asylum Support Tribunal Court in London. Nineteen days after my permission to work was revoked the UKBA served me with a decision on my asylum case, and then gave me 28 days to leave the country, claiming that  the application was unfounded and that I have  lived here unlawfully for 12 days—after 12 years’ legal residency.

In order to justify their action, the UKBA lied to a serving MP, Andy Burnham, on several occasions – one of which was about my immigration history – claiming that I was not in the country between 1998 and 2001, and that I was granted an entry clearance in 2001 to come to the UK. The agency was proved wrong when they were confronted with a degree transcript from a British university. The UKBA also failed to show in which country the entry clearance was granted. They apologised to my MP for making a misleading statement about my case.

I put forward some questions to the UKBA through my MP in relation to this matter. However, they never responded to the questions. They further suggested to my MP that I should apply for Indefinite Leave to Remain. This application was logged in March 2011, but was subsequently refused in April 2011 without consideration to my right to private life or right to appeal. I also have a nine year record of tax and national insurance contribution, and another three years of voluntary work.

The UKBA is now failing to participate in a legitimate legal process by ignoring correspondence from my legal representatives. A request was also made for the UKBA to make available all documents, whether electronic or hard copy, relating to my case. This too has been overlooked.

Having again revisited my case, I strongly believe that I am being persecuted by the UKBA for helping a destitute family to secure food support through the court. I now acknowledge that I will only be prolonging my own debasement and persecution if I let the UKBA further abuse my freedom, legal rights and liberty in this most fraudulent and cowardly manner. I therefore have no other choice but to take this action.

This action is taken independently without legal or organisational influence.