Aaron Porter’s position as President of the National Union of Students (NUS) looked increasingly untenable today after he was accosted and chased by hundreds of students from the University of Manchester campus to the Manchester Metropolitan University (MMU), where he took refuge  behind a police cordon. 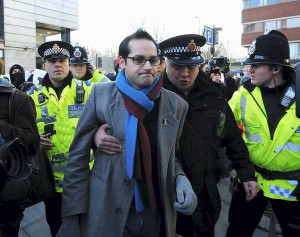 Aaron Porter being led into the MMU Students' Union building by police.

The incident began when a small number of students spotted him at University Place, opposite the Manchester Museum, the arranged starting point of the student march. As they argued with about his record as head of the NUS, which has been controversial due to a number of statements critics say amount to denouncing his own membership, a larger number gathered around until there were around 300 people, with some reports suggesting as many as 500.

According to one member of the group, private security guards, who it is believed were hired by the NUS for the event, escorted Porter as the protesters “walked” him back toward MMU, chanting “students, workers, hear us shout, Aaron Porter sold us out”, and “Porter out”. Once at the university campus the police helped him in to the union building, where the NUS leadership based themselves for the day, with a small number of protesters attempting to gain entrance through a side door, before being thrown out by the same security company.

Witnesses reported that he was visibly shaken, with two separately describing him  as “sobbing”. Following this, Porter did not take part in the march, and did not speak as scheduled at the TUC/NUS/UCU rally taking place at Platt’s Fields. Shane Chowan, the union’s Vice-President, spoke instead, but was pelted with eggs at the end of his speech. References to the NUS throughout the rally were greeted with booing and heckling from the crowd.

Porter and the NUS leadership have come under increasing pressure since the very first day of the protests. He condemned the protesters involved in the Millbank occupation as “an utter disgrace”, and held a glowstick vigil on the December 9th while thousands of protesters were attacked by police in Parliament Square. His proposed strategy of using non-existent “Right to Recall” legislation was condemned by critics as infeasible, and he refused to support today’s protest in London. In a Guardian article yesterday, he dismissed opposition to his leadership as due to a “self-aggrandising minority”. Critics argue that his position, being indirectly elected, is unrepresentative,  and that his preference for lobbying instead of street protests ineffectual, resulting in increasing calls for him to step down.

Today there was local anger at the way the protest and rally was organised. Alex Fountain, the MMU Student Union’s Community Officer, complained that “our students’ union should not be used as a headquarters for the NUS”, and said that they seemed uninterested in giving local activists a voice, with none invited to speak during the rally.

“There was no engagement with Man Met Union at all, and no opportunity for student reps from Manchester to talk at all. The cuts are going to affect Manchester really badly,  so what’s better than getting someone involved with a local campaign?

Everyone’s talking about working together, but their actions aren’t following their words.”

Anger was not only directed at the NUS. Tony Lloyd, Labour MP for Manchester Central, was also heckled as he told the crowd that he voted against the fees increase and the abolition of the Education Maintenance Allowance, with some shouting “but you voted for the Iraq war”. Eggs were also thrown at him at the end of the speech.

Around a thousand protesters left the rally before it had finished, heading toward the City Centre instead. This group was gradually diminished by scuffles with police along Oxford Road and Upper Brook Street, with several reported to have been kettled in Deansgate until 5:30 this evening. 16 public order related arrests have been reported so far.