In Salford and seeking sanctuary

What issues do the growing numbers of refugees and asylum seekers face in North Manchester and Salford, and are they being supported? Kathrin Ohlmann reports. 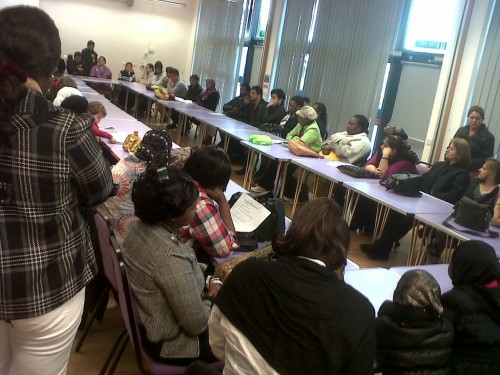 Tinashe [Name has been changed] lives on £8 a week. That’s the money he receives from the Boaz Trust, a Christian charity supporting destitute asylum seekers in Greater Manchester. He’s not allowed to work and has no other options to earn any money. How does he manage? He laughs. “What can you do, you have to survive.”

He was made homeless when his claim for asylum was rejected and he was no longer entitled to accommodation. He’s from Zimbabwe and came to the UK in 2004. Does he stay with friends and family now? “There are no friends and family,” he says.

The Boaz Trust provides with him a room in one of their houses for asylum seekers in Moston, North Manchester. Before that, he used to stay in Leigh and Salford. Every day from Monday to Friday he volunteers at the homeless charity Mustard Tree on Oldham Road in Ancoats. “I get free lunch there, and sometimes food to take home.” They give him clothing and a bus pass.

He’s very involved with different asylum groups and attends meetings for the Red Cross, the Revive Action group and the Salford Forum for Refugees and People seeking Asylum (Forum). He has put in a fresh claim for asylum and hopes it will be accepted so he can look for work. But he doesn’t sound very optimistic: “It’s been more than a year since I heard from them.”

Tinashe is not alone: destitution has become one of the biggest problems for asylum seekers in Greater Manchester. “There’s a high level of destitution because people’s appeal rights are exhausted, and they lose access to support, but they still feel they need protection and it is not safe for them to return home” explains Estelle Worthington, North West co-ordinator for the Regional Asylum Activism project . There are no reliable figures for destitute and homeless asylum seekers in Salford.

Worthington adds that when the last appeals have been turned down, asylum seekers get evicted from their accommodation. “Some people receive food parcels from charitable organisations, but they’ve got no access to public services. And with limited access to health services, and no access to housing or other support, people find themselves on the street.” She says that poor decision making at the UK Border Agency (UKBA) is the main reason for this situation. “Most claims are overturned by the UKBA because there is a strong culture of disbelief.”

A lot of cases are refused and the claimants then appeal. The process of appeal and waiting for decisions can take years. Worthington speaks of the toll these periods of waiting take on people: “Their lives have been put on hold, and these are barriers to mental health and well-being.” She adds that cuts to various services delivered by local councils, such as advice services, has affected many people seeking asylum across Greater Manchester. Now they almost solely rely on church groups and community organisations.

Irfan Syed is angry about this lack of support. “There are asylum seekers who are destitute and homeless and Salford City Council does nothing.” He is the vice-chair and one of the founders of the Salford Forum for Refugees and People Seeking Asylum. It’s a community group founded in 2009 by a group of fifteen men and women with asylum and refugee backgrounds to help fellow refugees and people seeking asylum integrate and settle into the area.

Most of the members live or work in Salford: “It’s a mix of people: some of us are refugees, some asylum seekers and some are destitute. We’re from Russia, India, different African countries, Kazakhstan, and Tajikistan.”

The Forum is funded by Salford City Council but the amount of money depends on the year: as community organisations have to bear the brunt of the cuts, last year they received less than the year before. “We’re looking for other ways to get funding,” says Syed.

Support from the Council is more necessary than ever due to the changing population, says Syed. “Salford’s demographic has been changing in the last few years and the number of people from different countries has risen a lot.” He adds, “There has to be more support from Salford City Council to meet the needs of the growing immigrant population”. 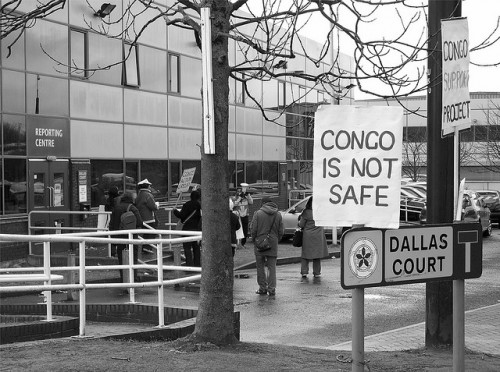 The rising number of asylum seekers in the area was caused by changes in asylum policy. The government implemented the strategy of dispersal in 2000 to move asylum seekers away from London and the south east. Until then, most people claimed asylum in those areas upon arrival there.

Worthington says, “There was a significant spike in numbers of asylum seekers dispersed to Salford from 2000 to 2004, but after that it has levelled out.” Salford is the second important district for asylum seeker dispersal after Manchester in the North West.

She adds: “Over the past ten to twenty years, asylum has essentially become a political football in the UK.” The level of support available to people has been reduced. ”The premise is largely: if you reduce support, people won’t apply.” But, she says, “most people who come here don’t even know they’ll receive support.”

Last summer the Horizon Centre in Salford, a health centre for asylum seekers, was closed for financial reasons. Worthington says that groups and support agencies were concerned this would affect asylum seekers’ access to healthcare and feared replacement services would not have an understanding of the needs of these patients. ”Some of these fears appear to have come true”.

Syed criticised that there is nobody responsible for asylum seekers and refugees at Salford Council. ”I’ve raised it with the Council but was unsuccessful”, he says. People face problems in access to housing, health services, employment and higher education because English is not their first language, says Syed.

”It’s not that they shut their eyes and wash their hands of any responsibility at the Council. There are Councillors who are willing to listen to us to make a change.” But, he goes on, “a proper way has to be found to in which Councillors can help the refugee and asylum community to have rights in the city council.”

A Salford Council spokesperson told Mule they had worked with local colleges to encourage access to free English classes, and had “worked with established communities to develop a BME network bringing together 13 BME community organisations and the council. We helped them find funding, develop job clubs and employment projects targeted at their communities.”

Safety in the streets is another concern, especially for homeless asylum seekers. Syed speaks of the fear of going out after dark: ”Especially after the killing of Anuj Bidve, people don’t like to go out at night.” The motives of Bidve’s murderer Kiaran Stapleton have never been confirmed but some local migrants and asylum seekers feel worried by it. Worthington says, ”Salford has higher incidents of hate crime and asylum seekers in some accommodation don’t feel as safe as in some areas in Manchester.”

Superintendent Wayne Miller of Greater Manchester Police told Mule that “since April 2012 there has been an 8 per cent increase in the number of hate crimes reported in Salford, and our best ever detection rate at 51 per cent.” But the police community relations officer in charge has been made redundant, says Syed, and no one is responsible for hate crime at the moment.

Syed organised a peace event at St. Clement’s church in Ordsall, close to where Bidve was shot. ”We invited people from local communities and refugees to raise awareness.” It was also to encourage people to feel safe and to show them that the local community is with them.