The Family Wolves is a band synonymous with the Antwerp Mansion rehearsal space, venue and gallery in Rusholme. The renovated former Conservative club has been fertile ground for up and coming bands in recent years, none more so than this band whose members have had a direct role in creating and running the Mansion. The band’s psychedelic tones transport them to a different location and era – 1960s west coast USA bluesy folk-rockers such as The Grateful Dead or Neil Young spring to mind. 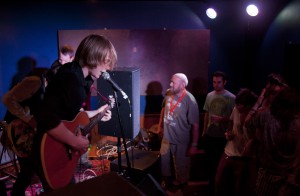 The Family Wolves live at the Dulcimer. Photo: Andy Minotaur.

Their lead guitarist, Dan Jones, spoke to MULE ahead of their performance at Pop Up Bikes on 26 October in the Friends of Mule event.

MULE: Since we last spoke you’ve put out a CD – how did that go down? Has it made it easier to have those songs recorded and to move on?

Oh yeah, definitely. It’s had amazing response and was just a relief to finally get it out. We’ve been sat on those songs for a while! Tracking for the record started in the summer of 2012. We recorded everything in and around Antwerp Mansion, that ballroom is part of our sound. It was a pretty smooth ride getting everything down and in place – Matt [vocals, acoustic guitar] borrowed a Mac, we had the mics, the space and the time. It was great fun getting it down with no pressure.

The mixing on the other hand was a bit of a nightmare. With the September season starting at the Mansion we all had quite a lot on. Finding the time to mix with a fresh pair of ears without a blistering hangover in a decent space was possibly the hardest part of making the record. We mixed it in one place, remixed it. Mixed it in another space then remixed it again. Someone else tried mixing it, we lost that. It was a nightmare! At this point we had to make a decision: do we want to just get it out or do we want to do it right? It definitely meant a hell of a lot more to all of us to do it right. 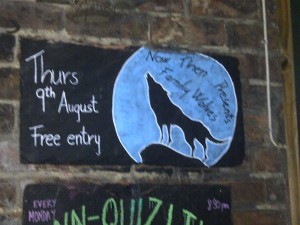 MULE: You’ve lost Alex on the drums to a European tour with his other band, Packt. Has this altered much for you as a band?

Yeah. Following on that last thread, as well as the mixing problems we had a lot of members change in the band at that point. We were all really comfortable with each other but around the same time both Alex and Brad [keyboards] left the band. I’d known Christian Fields for a few years through uni – we’d been trying to get a project off the ground sometime before – so I just gave him the call to come play some keys. I knew at that point if Christian stayed in the band, being the talented jazzer he is, we would definitely have to lend our sound to accommodate him more and at the same time it was a new direction for us.

Matt was writing some really conceptual stuff, some real deep shit that makes you think. Christian and Lewis Olivia [drums] definitely helped us in a big way to explore new territory we hadn’t been looking at previously. At one gig someone compared us to an early Radiohead, which made me laugh as we started out as a folk band. We were well underway with writing our second record before the first was even mixed.

Getting back to the members, Brad found the time again so it was just a really natural move to get him back in as well as keeping Christian. The Doors west coast rock organ versus Chick Corea jazz Rhodes. 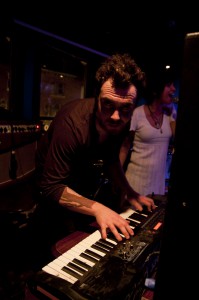 As for drummers, Lewis left because he was training for the Olympics – how do you compete with that?! In fact our best drummer story was when David Schlechtriemen from Walk deputised a gig at Night and Day Cafe with us. Halfway through the set he got a call telling him his wife just went into labour, so naturally he just up and left, without his drums. Completely in shock of what to do, we spotted Alex in the crowd and he just jumped on stage to finish the set with us. It was so surreal, that was our last gig with Alex before he left.

Then we had Ben Gow, a good friend of Christian’s and mine who put a lot of effort in over the last few months but sadly the chemistry wasn’t really there. For this gig we have Charlie Stirzaker stepping in, we’re all really appreciative of his time. There are a few guys we’re looking to work with but nothing set in stone. Maybe we can use this for a drummer advert… play drums? Get in touch!

MULE: Do you think the fact all the Wolves are involved in other bands is a help or hindrance?

It’s a bit of both really. Matt’s got The Magic Room Band, Kris and Christian have Beef [also performing at the Friends of Mule gig], Celine [backing vocals] and I have our own trip hop thing as well as producing and recording a lot more. I have Djembeklan and whatever else I have time for as well as all of us working at the Mansion – Kris in particular has a lot on his plate with that. And Brad’s managing two bars.

It’s a juggling act really, at the best of times we do one day per week but we’re not flexible so if we miss the opportunity that’s it. It rarely gets stale. We all play in an eclectic array of bands so we’re always fresh and eager to get in a room with each other, which after spending years playing in bands is such a precious thing – the thirst for creativity. 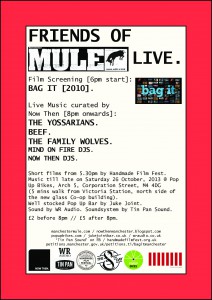 MULE: What are your next ambitions for the band? Will there be another record soon?

Oh yeah, there’s a live EP out online already, go listen. With the last record, we held everything back for the release and it worked. We got a good buzz from it but we have changed so much since the start of recording it that it felt like we just needed to get more out as soon as possible. We managed to get a great live recording from WR Audio at the album launch so we just put it up so people could catch up with the new sound.

Right now we’re in the middle of recording a new single, which is a rearrangement of a B-side on the album. It should be pretty interesting for fans that know the track from our live shows anyway. It’s rearranged to almost bridge the two very different releases we’ve done so we hope to get the best of both worlds in that one track. Matt’s working on a few more songs to expand the set from the live EP, so we’re saving money to try to get the budget to get into a good studio and make a proper record. At the same time I can feel us starting to write completely new material very soon. Watch this space.

The Family Wolves will perform at the Friends of Mule fundraiser gig on Saturday 26 October at Pop Up Bikes.