Public money is streaming into private property developers but despite the bail out companies are not required to build extra affordable housing. Andy Lockhart investigates the Northwest companies receiving funds, missing deadlines and continuing to sell at a premium. 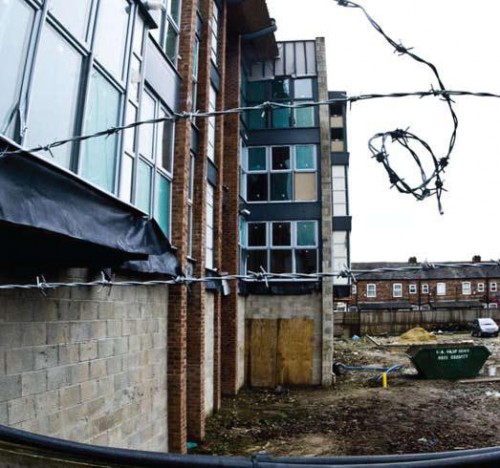 Hundreds of millions of pounds of public money has been pouring into regeneration sites around the country, many of which had stalled as investors and developers had sat on their hands waiting for the economy to pick up again. That the industry’s showed a “tremendous response” to government plans to give over £1 billion is hardly shocking.

Compared to bankers’ bonuses there’s been little scrutiny of the vast sums going into these projects. A little surprising, considering how bound up the financial crisis was with the property market.

In December, the Homes and Communities Agency (HCA) published the list of schemes awarded funds from the first round of the Government’s Kickstart programme. It totalled £360 million for 136 projects, 22 of these were in the Northwest, receiving over £48 million between them.

Despite repeated requests for clarification, the HCA failed to explain to MULE why a grant of £9.4 million to The Maine Place, the City Council’s high profile regeneration project on the site of the old Maine Road stadium, was not mentioned in their December announcement. The allocation, given in October, is the largest to date in the Northwest.

MULE reported on this stalled project early last year, which the Council awarded to Lowry Homes in 2004. Back in March neither the Council nor the developer were willing to comment on the situation. Only one local councillor replied to our questions, to say she was “not up to scratch” on the matter. Moss Care Housing Association, who run the HomeBuy (shared-equity) scheme for The Maine Place, were also unable to enlighten us.

Shared-equity housing allows low-income buyers the chance to buy part of a property and pay rent on the rest, which is owned by the developer or local housing association, who are in turn funded by the Government. Housing associations are bracing themselves for deep cuts after the General Election, regardless of who gets in. This presumably means leaving more affordable housing in the hands of the developers.

60 of the 477 new homes in the Maine Place are supposed to be part this HomeBuy initiative. Locals worried from the start that this was too few. At the time of writing, of the nine properties currently advertised on Lowry’s website, the cheapest are three-bedroom homes at £162,950.

Residents were unsurprisingly annoyed by the lack of progress and information. “There has been no contact at all from either the Council or Lowry,” said one, before continuing, “we wanted local people to be involved in the construction of the new homes, but this doesn’t appear to be the case.” 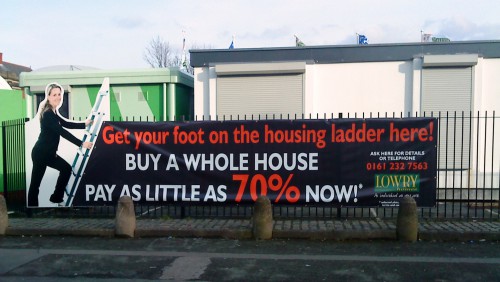 Others are equally frustrated. Jenny Weeks put a £3,750 deposit on a house in February 2008 and was told she could move in the following August, when the first phase would be completed. Still waiting to move in, she told the MEN in November: “I am close to tears every time I speak to Lowry. I feel let down, angry and stressed. We never got anything from Lowry telling us what was going on, they just kept putting it back and back.”

With building work ongoing, Lowry now claims the phase will be finished in March. Meanwhile, the developer is on the shortlist for Kickstart Round Two funding for four more projects in the Northwest and Yorkshire.

The high profile schemes of east Manchester have fared no better in the recession. Out of a number of applications for Kickstart, four developments received funds. Gleeson Regeneration earned itself £1.09 million for 52 properties on its City East Phase 1 development in Beswick, and is on the Round Two shortlist for its other Manchester project, Grove Village on Stockport Road, where it is building one and two bedroom homes.

Countryside Properties was awarded £1.29 million to build 62 houses at Spinning Vale in Gorton. Countryside was given nearly £28 million in the first round for schemes around the country. Hopefully CEO Graham Cherry’s statement that his company’s homes “represent excellent value for money” holds true. It has two more on the shortlist for Round Two.

Northern Group, the Manchester-based (but Zurich-registered) company, won £1.76 million for its Ice Plant development, part of the flagship Ancoats Urban Village regeneration. Of the 82 homes to be built on Blossom Street, which were supposed to be ready by spring, none are to be HomeBuy or social housing.

Also part of Ancoats Urban Village is the Artisan Ship Canal Development. Artisan Ship Canal is a partnership between Manchester City Council, Artisan Holdings and Peel Land and Property. The scheme gained £4.93 million from Round One for ‘Advent Phase 5’, which involves the building of 108 houses and flats. Again, there are no HomeBuy or social rent properties planned.

Peel have had a rough time during the recession – according to Crain’s Manchester Business, £740 million have been wiped off their assets. Peel Airports are losing money (like most airports at the moment), and the group have over a million square feet of empty properties, yet the £4.5 billion giant seems to be struggling on.

Artisan has also faced financial difficulties. Chair and Chief Exec Carol Ainscow put ACG North, a subsidiary of Artisan Construction Group, into voluntary liquidation at the end of 2008, after three directors (including Ainscow) had resigned in less than six months. The move stalled several developments.

In January Crain’s reported that ACG North owed £9 million to 200 creditors, who called in insolvency practitioner Gerald Krasner to investigate whether the group had been trading for over a year and a half while insolvent. At a creditors’ meeting in Stockport, Krasner highlighted accounts from June 2007 apparently showing £10.2 million debt owed to ACG by a “subsidiary undertaking”, which the ACG Managing Director explained to be “inter-company invoicing”. Krasner went on to question how all of ACG North’s assets were owned by other parts of Artisan Holdings.

CEO Ainscow was dismissive of Crain’s report, however, telling MULE: “Artisan were perplexed with the content, particularly the slant and inaccuracies.

“Artisan is faring well in the present market conditions. The Advent development is progressing since the award of Kickstart funding. Contractors are currently being interviewed for a prompt start on site.”

This raised more questions than answers, but no further responses have been forthcoming. Repeated attempts to contact other parties have also failed. Through a number of dead email addresses for press officers at the Council dealing with Artisan Ship, eventually someone from New East Manchester “asked around the team” for us, but concluded “we can’t help unfortunately.”

Clearly it is very difficult to find out what’s going on in regeneration projects around the city, for journalists as well as local residents. Perhaps there’s nothing to hide. But public money is endlessly streaming into these private developers – companies which are not required to build extra affordable housing, despite taxpayers bailing them out. Instead, these companies, many based in offshore tax havens, continue building more yuppie flats and enjoying the profits.

Residents, who may have seen their homes demolished following a compulsory purchase order, are often unable to return after being priced out of the market. Still, they should still be thankful the area is being ‘regenerated’.