Throughout the Paralympics a light was shone on the stripping of benefits from hundreds of thousands of disabled people, many of whom are forced to defend their rights in court. Now, activists who fought running battles to protect advice and representation against massive cuts are launching a campaign to rebuild access to legal aid. 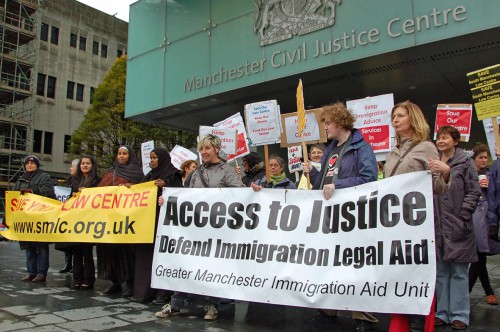 Access to Advice, a Manchester-based group which campaigns for access to free, independent and public legal services for all, will host the launch on Monday 1 October at a fringe event of the upcoming Labour Party conference. Speaking at the event will be local MP and shadow Equalities minister Kate Green, and Wigan MP and former Citizens Advice Bureaux (CAB) executive Yvonne Fovargue.

Legal aid has undergone waves of cuts and market based reforms over the past decade under both Labour and Conservative-led governments. Two major national providers, Refugee and Migrant Justice and the Immigration Advisory Service, have both collapsed in the last two years and in 2011 Manchester City Council closed its own Manchester Advice service amid suspicions that lead officers and senior councillors targeted it in the belief it created “welfare dependency”.

Only a handful of benefit appeals advisers are left with the council’s own service, with legal aid cuts expected to damage the appeals capacity of remaining services such as Shelter and the CAB at a time of radical welfare changes and mounting poverty.

Reforms in the Legal Aid, Sentencing and Punishment of Offenders Act, which received royal assent in May, are intended to cut £350m from the Ministry of Justice’s legal aid bill and will come into force from April 2013.

Organisers warn that many local areas will become “advice deserts” where many people will be unable to have recourse to the law on issues such as housing, employment, domestic violence, welfare support and migration.

Margaret Manning of Access to Advice told Mule that “the idea is to start campaigning for what we want in the future” ahead of a national legal aid conference in early 2013. She said however that campaigners hoped to develop and campaign for a new system, rather than simply restore the old pre-austerity funding methods.

“The old legal aid system wasn’t the best system” she explained, pointing to how ever more restrictive eligibility criteria and funding systems had already undermined provision and reduced eligibility from 80 per cent of the UK in the 1940s to 36 per cent in 2009,  according to Ministry of Justice figures.

Manning said the campaign wished to organise for a fresh system of legal advice that would offer fair access to people who needed it. “Closing Manchester Advice halved the legal aid available in Manchester”, she warned. “Cutting legal aid will halve it again”.

Meet at Cross Street Chapel, Manchester City Centre at 5pm Monday 1 October for a 5.30pm start. All are welcome