Manchester Craft & Design Centre is to host a special event this Saturday to mark its 30 year anniversary, as Elbow frontman Guy Garvey is unveiled as its new patron. 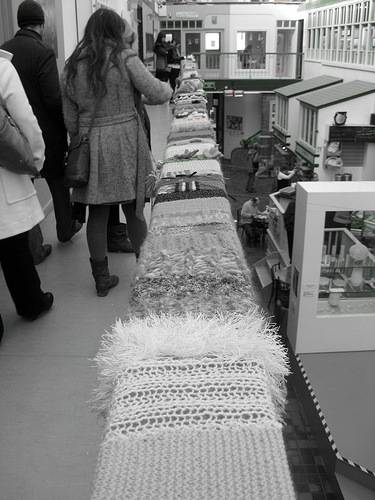 Inside the Craft and Design Centre. Photograph: Jeff Edoe

The Crafting History exhibition will be held at the former fish and poultry market on Saturday 14 July, featuring a family-friendly daytime programme including a ceramics installation by Porcelain artist Carys Davies and workshops led by students of the Embroidery BA course at Manchester Metropolitan University.

Entertainment during the evening will be provided by the sampler-cultureclash collective, with the group using various elements of the Craft & Design Centre’s 30 year history to compose an audio visual spectacle.

Current residents of the Centre will produce specially made crafts to donate to the exhibition, which will be auctioned at an event to raise money for the Shelter housing and homelessness charity later in the year. The auction is due to be hosted by the Craft & Design Centre’s new patron – Elbow frontman Guy Garvey.

Speaking about his support for the Centre, Garvey said, “Years ago I’d sit and scribble in the café, or wander around the shops watching people work.

“It’s one of those warm personal destinations that I’ll meet friends from out of town in and if you like to give personal gifts then there is nowhere better in the North West. Im very proud to be a patron.”

To book a free ticket to attend the musical performance, visit the Manchester Craft & Design Centre website. The Crafting History exhibition opens on Saturday 14 July and continues through to 10 November.