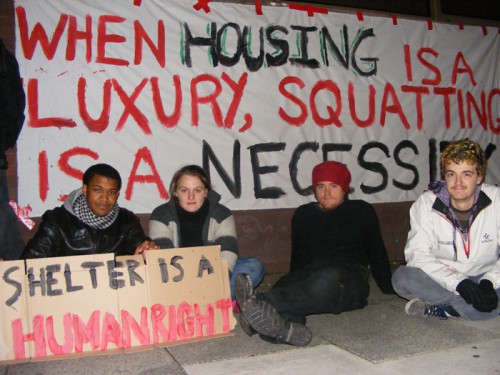 Around 20 people slept outside the BBC on Oxford Road, Manchester last night to oppose new legislation that would criminalise squatting.  An amendment to the Legal Aid, Sentencing and Punishment of Offenders Bill which has its first reading in the House of Commons today, Tuesday 1 November, will make it a criminal rather than civil offence to trespass in an empty residential property.

Software technician Mark Elseveer from Longsight, who took part in the sleep out last night, said: “We came here to the show the public how the new legislation will have a disastrous effect on homeless people in Manchester. 39 per cent of 40,000 homeless households have at some time squatted empty buildings to keep off the street.”

According to the Manchester Evening News, there are over 100,000 people on the waiting list for social housing alongside over 50,000 homes standing empty in the Greater Manchester region in 2009.

Homeless charity Crisis also opposes the new laws. A recent campaign email from the charity pointed out that the Legal Aid Bill amendment includes buildings which are “totally derelict”, stating that Crisis was “concerned that homeless people will end up in prison for simply trying to put a roof over their heads”. The charity has asked for an extra amendment to the Bill to exclude from the law persons who have been registered homeless in the previous year alongside people who are registered as ‘at risk’ or a ‘care leaver’.

Last month 160 leading legal figures wrote an open letter published in the Guardian explaining that under Section 7 of the Criminal Law Act 1977 it is already a criminal offence to squat someone’s home.

Protester Mark Elseveer added: “There is a misconception that squatters can move into a house while the owner is still living there. This is illegal and there are already laws that cover this situation. Squatters can only legally occupy an unused building. The new laws being proposed tomorrow are completely unnecessary.”

Over the past three months the government has undertaken a consultation, “Options for Dealing with Squatters”, which came to an end on 5 October.  The campaign network ‘Squatters Action for Secure Homes’ (SQUASH) have accused the government of “ignoring the consultation” by rushing through anti-squatting laws only three weeks after the consultation has ended. 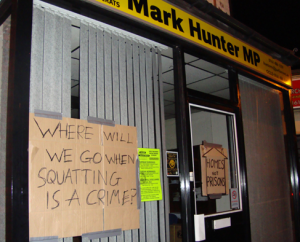 Squash campaigners have also accused the government of bypassing democracy by trying to “sneak through” the legislation. They say that the Amendment to the Bill was only announced early last week, not allowing sufficient time to raise public awareness about the effects of the proposed new laws.

In London, around 13 people were arrested in Parliament Square last night for attempting to sleep out there.  Around 200 homelessness protesters had gathered but were kettled by police.  Arrests were made for breaches of the Serious Organised Crime and Polce Act – a controversial law relating to protests around Parliament which is currently being repealed.

Reuben Taylor from SQUASH said, “SOCPA says you have to register a protest seven days in advance but a week ago today they hadn’t even announced the amendment.”

The sleep out in Manchester ended around 6am this morning.