For the second time in the space of a month protestors have been arrested while taking part in demonstrations called by the anti-cuts campaign group UKuncut Manchester. 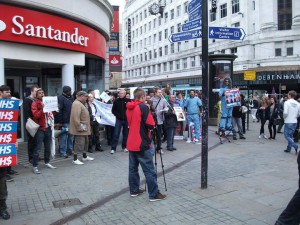 On Saturday police arrested nine protestors who took part in a peaceful sit in occupation of Santander bank on Market Street in central Manchester. This follows the arrest of several demonstrators outside the Vodafone store on Market Street on May 14.

Saturday’s protest at Santander, dubbed ‘the emergency operation’, was part of a nationwide decentralised day of action against proposed NHS reforms and spending cuts. UKuncut targeted branches of major high street banks across the country. The purpose, according to UKuncut spokespersons was “to highlight alternatives to NHS cuts, including making banks pay for their ongoing public subsidy of up to £100bn a year.” This subsidy, based around government guarantees backing risky lending, is roughly equivalent to the entire NHS annual budget.

While around 40 branches were shut down nationwide, it appears that arrests only took place in Manchester. The nine arrested at Santander were held to “prevent a breach of the peace”, and were taken straight from the bank into waiting police vans. The protestors claim that they were not given an option to leave the bank voluntarily before being arrested. All were subsequently released without charge.

The arrests on 14 May took place at a picket of the Vodafone store to highlight the company’s controversial avoidance of around £6bn in tax payments. A scuffle took place after protestors were assaulted by another member of the public. The assailant was given a fixed penalty notice, while three UKuncut protestors were arrested and cautioned. They maintain they were acting in self defense after nearby police failed to intervene to stop the attack.

UKuncut Manchester claim they have on several occasions been subject to intimidation from the police and Arndale Centre security guards, and claim the incidents exhibit a “classic case of political policing attempting to stop legal protest.”