Moston takes cinema back to its roots

An old miners washhouse in north Manchester has been transformed into a permanent 70-seat cinema by local volunteers and will open this Saturday with a nine day film festival. 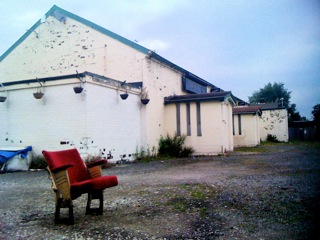 Re-Dock’s “A Small Cinema” was initially intended as a temporary installation to house the Moston Festival of Film, in a scheme commissioned by arts agency Buddleia and funded by Manchester City Council. The idea of a community cinema proved so popular with locals it is now to become a permanent Moston fixture.

The festival will open on Saturday 27 October in the afternoon with a children’s screening and will end the following week with Ken Loach’s Manchester comedy, Looking for Eric. People will also get the chance to see Jaws and Gone with the Wind, as well as a Halloween screening of Manchester cult film Living Dead at Manchester Morgue.

Based at the Miners Community Arts and Music Centre on Teddington Road, the once derelict building was run as a cafe by father and son team Sam and Lou Beckett until its recent transformation into a screening space. The project is part of an initiative to bring back small cinema to Moston and will give locals the chance to have their say in what they watch.

Small Cinema founder and artist, Sam Meech, was keen to find out what people living in Moston thought about cinema and spent time meeting locals, discussing film and gathering memories.

He told Mule he very quickly “got a sense of, not only was there enthusiasm for the idea, but there was a kind of willingness and a real sort of activist network”, arguing that “it’s not about thrusting something on people.”

Meech wants to take cinema back to its roots as a social experience and added that the project is “a reaction against the big corporate cinema.”

He said a tremendous amount of work has gone into the project, explaining how before the transformation began the space “was in such a state”. He added that the cinema “wouldn’t have been done if there weren’t people willing to muck in with their time, their skills”. 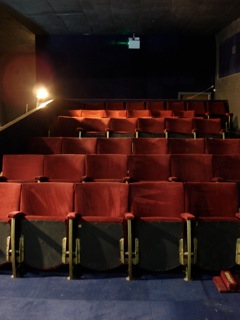 Local man John Marley has been helping to bring the project to life. He praised the “size, scope and ambition” of the project and has contributed his 20 years of experience working in concert and theatre to help build the cinema. While Marley said he doesn’t think there are many facilities in Moston for the local community, he believes the cinema has the scope to “be whatever it wants to be”.

Marley believes community spirit has played a big part in this project. “Everything you look at here is a contribution; the whole of this building now is just one great big chunk of goodwill.”

Another volunteer, Paul Murphy, became involved with the project after hearing about it on the social networking website Twitter and has donated his time and hard-work to help build the cinema. He feels the cinema can only be good for Moston and pointed out that “there’s not really anything like this in the area.” He added that the “unique selling point of the cinema is the fact that it is free.”

Free workshops will also feature throughout the festival including a Make-up SFX event by Davey Jones, who has worked on blockbusters and major TV shows such as Pirates of the Caribbean, Doctor Who and Blade.

Admission to the cinema is free and the festival will run from Saturday 27 October to Sunday 4 November.

All events are free, but some workshops require booking. See here for details