With his new record “I don’t usually MCs, but…” doing the rounds, Joseph Ritchie caught up with DRS of Broke’n’£nglish for a chat about the new album, the Manchester scene and taking things on the road. 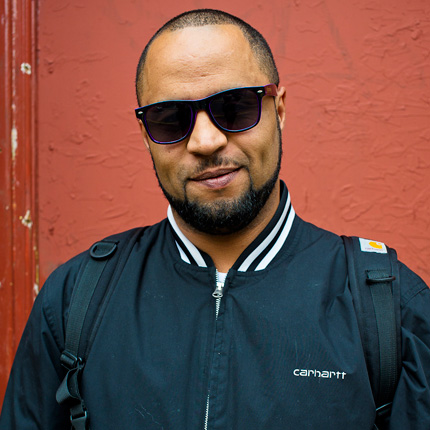 MULE: So, how has the reception been to the record so far:
So far it’s been really good. The radio is playing it. DJs are playing it. Friends say they like it but then they always do…[laughs].

MULE: After being in the business for so long, how do you keep things fresh?

Working with new producers and news labels. I always work with different people in different areas which keeps it interesting and fresh. Everyone I’ve worked with has been a friend before or we’ve at least known each other. That way it’s very relaxed in the studio and happens naturally.

MULE: As well as making drum and bass, many people know you as an MC first due to your work with Broke ‘n’ £nglish. When writing, Does music come as easily as lyrics?

Yeah, it’s similar. Some when I can’t get started so sometimes I’ll just drop my finger on a line in a book and tell the story from the point. Once you’re a line in, it starts to come more naturally.

MULE: Do you have the same aims when it comes to lyrics and music?

It’s the same. The same message.. With the drum and bass it’s not that fast rapping or anything but still my half stuff where it’s easier to hear. I think this is why it tends to have longevity because people can actually hear what you’re saying. Sometimes when it’s too fast it won’t go in but when people understand things it’s there forever.

MULE: How important is Manchester in all of this?

It’s home but it’s just a melting pot of different cultures and opinions. People speak their mind here. There is a lot of love and a lot of trouble here too but it’s a great place to be creative, it’s the ying and yang thing. Skateboarding, graffiti artists, rock bands… In London it can too much. It’s overkill and people don’t come out to see things so much. For me it’s all about Manchester.

.
MULE: Talking to Dub Phizix, it seemed like the Manchester scene has become much more mutually supportive. DO you find that?

Yeah definitely., definitely. It’s more about having a wide circle of friends who have all been killing it in different ways but now that’s coming together more. And now when we’re pulling all the strings together, all these guys who were firing on all cylinders are coming together and it’s made it more powerful.

MULE: How do you see the UK scene now as opposed to back in the day?

Yeah, the UK hip hop scene is kind of dead. At the time when we could have done something people were too complacent and took their finger off and now it’s kind of done. The only people that have survived have been people who have diversified and stayed powerful like Foreign Beggars. And we’re similar, we’ve never just been straight up UK hip hop. I’ve been in drum and bass as well so never really been in that box.

MULE: I always like that your lyrics manage to be ‘political’ but without being doctrinaire, but relatable instead. Is that a conscious decision or just what happens?

It’s just how people are in the north of England. Whatever affects them and they feel strongly about is what they’ll represent.

MULE: What about the more materialist stuff you can get?

A lot of the lyrics can sometimes just be lies and so I think people here appreciate the honesty. There are a lot of people broke and not a lot of people flossing so this is how you relate to them.

MULE: Is there any real mainstream support?

MULE: I’ve heard you say some interesting things about taking the music on the road

Pretty much, I’ve been working with DJs for about 15 years. I’ve worked with a couple of bands and it’s always been a pleasurable experience and seeing Skittles getting his live act together I kind of caught the vibe. We’re got two set ups for the tour. A DJ set up with MCs and vocalists coming out and a live thing with maybe up to a 10 piece band. We work with Kaleidoscope Grime Orchestra which is like a massive band – I don’t know how many guys – so we’re just trying to figure out if it’s going to be big, epic or stripped down and jazzy. I’m looking forward to putting it together and maybe some promoters getting their money out and going to smash it.

MULE: Where should we be looking out for in the next couple of months?

We’re doing the launch party on the 25th of August in London in a currently unknown whereabouts. A crazy line-up – Caliber, Dub Phizix and more. We’ve been the follow up the next night [the 26th] in Manchester with a similar night. It’ll sell out and it’ll be a memorable one. We’ve got soul:loution and outlook festival in Croatia. We’ve also got a launch party in Sardinia and currently putting together a tour. Right now I’m just looking forward to terrorizing stages all over.