After an eight year absence, the temporary squatted social centre ‘OK Cafe’ has re-opened in the Lord Nelson Pub on Newton Street in the Northern Quarter. 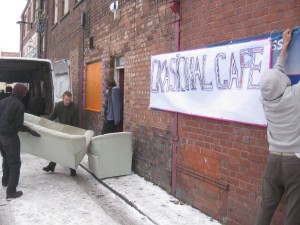 For the next two weeks, the venue will function as a radical space for meetings, workshops, organising, interventions and events as well as a daily café with regular vegan meals.

The space was officially opened today (Friday 3 December) – with volunteers moving in with paintbrushes, maintenance tools, lighting and decorations. A small opening party will be held tonight with live drumming, music and bring-your own-intrument jam.

According to the Manchester’s Radical History website, the first OK cafe opened in 1998 on the site of old Temperance Movement building on Oxford Road, now KRO Bar opposite the University of Manchester Students Union. The idea emerged out of the old Earth First networks – many of whom had come together at the Manchester Airport 2nd runway protest site. A number of other cafes were held across South and Central Manchester including an old canal keeper’s cottage on Dale Street in the Northern Quarter, a second one at Kro, one on Birch Grove in Rusholme, two at the former Hacienda space and at an auction house on Charles Street, next to the BBC – where the ‘OK Cafe’ sign could be seen above the door until it was knocked down a few months ago.

Gary, one of the participants of today’s OK Cafe, explained, “It felt like there was a need for an open space for people to meet up, bring and share ideas and plan together – where they can have freedom of the space and ownership over it. In this age of austerity and cuts, it’s about showing that people can come together and create an alternative themselves without much money. We’re next a swish-looking regenerated area of Ancoats – but there’s still all these old buildings that aren’t being used – it’s quite a contrast.”

“We want to bring new people into the space including members of the public and open up radical and autonomous ways of organising to all people. We want to have a good mix of sharing ideas, skillshares, planning actions as well partying and socialising.” 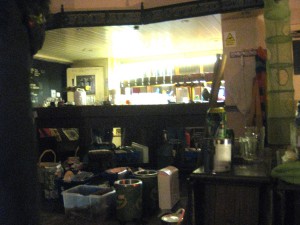 The Lord Nelson Pub can be located at the corner of Newton Street and Great Ancoats Street. You can contact the OK Cafe on 07783930361 or mcrokcafe@gmail.com or visit the website.