The first Marie Stopes abortion clinic in Northern Ireland will open this week in the face of draconian legal restrictions and threats by anti-choice groups to see it shut down. South of the border, around 4,500 women each year are  forced to travel to England to access an abortion. An upcoming documentary, “Why Women Travel”, is to tell their story. 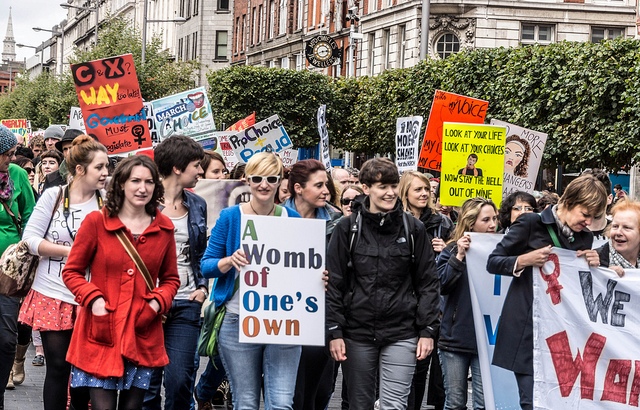 On 29 September a momentous demonstration took place in Dublin – the first large manifestation of public anger at the Irish state’s ban on abortion in 20 years.

Ireland, both north and south, has a ban on terminations unless the mother’s life is in danger. Northern Ireland was never included in the 1967 Act because at the time it was ruled by right-wing Protestant parties who refused to deal with it.

Politically, the usual suspects are against legislating for abortion and reproductive rights. But the Irish parties which we here in Britain might expect to support working people, such as Labour or the Green Party, also oppose legalising abortion.

The ban includes incidents of rape, incest, foetal abnormalities and the ill-health of the mother. These emotive situations are comparatively easy to be angry about. It is clear that in the case of rape a woman should not have to face a pregnancy. We would all agree on that. But what about what some people refer to as the “grey areas”? What about a family facing economic difficulties? The anti-abortionists find these easier targets.

The demonstration of 29 September was clear in its aims – to force the Irish government to legislate on abortion allowing all women to have access to services in their own country. Currently, people from Ireland in need of abortion are forced to travel to the UK or the Netherlands, away from familiar surroundings, family and support networks, to face an emotionally and physically difficult time. They are often unsupported and to return secretly to their homes often with no after care support. The cost of this is high.

A person getting a termination will pay up to €2,400 which includes travelling, the procedure and accommodation. A speaker from the Abortion Support Network which exists to assist women practically and financially spoke vehemently about the questions they are forced to ask women in search of financial support. “Are there any white goods you can sell? Can you borrow from your granny/mum/sister/neighbour? Have you looked under the sofa for any spare change?” This, at a time when the person in need of abortion has all manner of other problems to deal with. 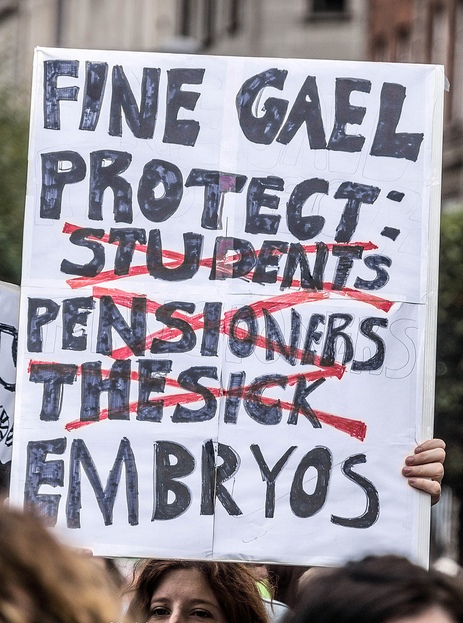 With the collapse of the Celtic Tiger the situation has become even worse. What was always a serious amount of money to find has now more regularly become impossible to raise. How do women cope? More often they resort to buying online chemical abortions and there are an increasing number being admitted to hospital following these modern day chemical, coat hanger terminations.

A migrant speaker highlighted before the demonstration the horrors faced by those without travel documents, or whose position to return to Ireland would be precarious. For these women the situation is often the worst and most forgotten. Financially they may be the most unstable, may be sex workers, may have no legal right to stay in Ireland, and then become pregnant. The Irish state has a lot to answer for.

In the UK we have had abortion since 1967. It is not a perfect system. People still face questioning from doctors and there is still often a veil drawn over the whole thing in many people’s lives. And we here may well be facing an assault on our access to abortion if Jeremy Hunt has his way. The Health Secretary would like to reduce access to a 12-week cut off point.

But this is nothing to compare with the taboo on abortion in Ireland. “Sure, we don’t talk of those sort of things here.” One of the most empowering moments from the Dublin demonstration was when four activists gave out printed abortion stories on O’Connell Street and into the tourist areas. “Here, take an abortion story. Look!”

The stories shouted out, in contradiction to recent disgusting billboard campaigns from vociferous anti-abortion group the Youth Defence League, that abortion does not tear women’s lives apart. The brave people who wrote and shared their accounts have started a trickle of water which will work toward eroding the silence.

Work being done in the UK in support of Irish people in need of abortion is the production of a film, “Why Women Travel”. The purpose of the film is to give groups in the UK and in Europe the chance to learn more about the shambles that is the Irish abortion crisis, and to plan to take action in support of working class people in Ireland.  People in Ireland are working hard on their own behalf but as long as the Irish governments choose to ignore the demands of the people of Ireland and even the EU, then international solidarity can only aid their struggle.

“Why Women Travel” will be released next Spring. Check out their blog here. For more information on how to donate to its production costs, contact whywomentravel@gmail.com

You can find information on Marie Stopes’ services here