Over the past ten days Queer Up North International Arts Festival has brought an impressive and challenging array of events to the city. Now in its 18th year, it is serving to highlight the failings of Manchester Pride and Manchester International Festival both to push political and artistic boundaries while being broadly accessible. 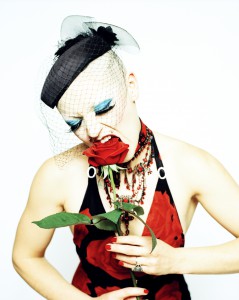 There are five more days of the festival left and those feeling that it is too ‘niche’ would be rewarded by challenging that view. The description is a disservice. Road Movie is a one-man, HIV themed play first performed in 1995. Re-imagined for 2010, it offered Library Theatre audiences a poignant exploration of the universality of grief. Peggy Shaw, performing at the same venue tonight, is likely to present a similarly polished, personal show.

Less traditional in form, Three at Contact Theatre was a storytelling triptych that split audiences with its seemingly hetero – but nonetheless sexual – content. There was confusion from some: where was the gay theme? Yet the performers had questioned “queer” and found diverse, unusual responses. The festival is not afraid to challenge its own purpose – a rare and important approach. “Unexpected” has served as a suitable description throughout.

Internal and Exam, two free, participatory theatre pieces, further push the envelope, addressing identity, politics, science and art. They run alongside club nights Brenda and Bollox vs Pussy Faggot, cabarets and traditional theatre. Audiences for one event may have no idea another is running. There are events to appeal and impress everyone – queer or otherwise.

One issue this year is the lack of visual arts. The only exhibition, Seven Acts of Reciprocity, is being held at the only non-central location, in Oldham Gallery. Is this simply evidence of lip service being paid to locality? Venues as diverse as Sachas Hotel and the Carlton Club suggest not. The exhibition itself is not too impressive, however, which may be expected of an attempt to show a retrospective of performance art, with no live performances.

The festival draws to a close over the Bank Holiday weekend, moving its primary venue into the heart of the Gay Village. The emphasis will shift to perhaps more readily identifiable “queer” events: alt.cabaret; burlesque; experimental performance art. Is this what and where it means to be Queer Up North? The festival is not that limited. The specially erected Speigletent, a dance hall of mirrors, will continue the thread of political, challenging and highly impressive performances seen throughout the festival. Apparently, this year the festival has had to cut back for financial reasons. Yet there is little evidence that quality or thought have been compromised as a result. Instead, we have been reminded how progressive, enjoyable and important the arts can be.

The Queer Up North website is here and the festival runs until 31 May.