The Bakers, Food and Allied Workers Union (BFAWU) has announced the end of the ongoing industrial dispute to protect the rights of temporary workers at Park Cake Bakeries, Bolton, following concessions from management. 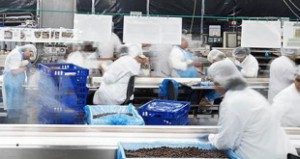 The agreement announced yesterday by union officer Roy Streeter provides the temps with a route into becoming permanent staff and rescinds prior contracts which gave no guaranteed hours to workers.

Commenting on the agreement, Streeter said: “I am so pleased that we stood up and did everything we could to safeguard our jobs and those of the agency workers that we feel were brought in to attack our terms and conditions.”

The dispute began over agency working and has become a major issue for trade unions concerned at the trend for employers to use agency workers to replace staff on permanent contracts. The practice drives down the wages of some of the poorest paid workers in the country, including those in the baking industry.

An attack on all wages

From October this year agency workers were given new rights under the Agency Workers legislation, including equal terms and conditions after 12 weeks. Park Cake Bakers however took on new staff in September, just before the legislation became law, paid at the national minimum wage and given ‘zero hour’ contracts with no guaranteed hours. At the same time they had not been replacing their core workers.

BFAWU took this as a direct attack on their members to drive down their wages and make permanent staff a minority within the whole workforce. Park Cakes were forced to sit down with trade unions following the threat of a strike action just prior to Christmas, one of the busiest times of the year for the industry.

Streeter conceded the deal was “not everything we want. We are a small union and the new legislation on agency working is full of holes so we have agreed a deal that we feel is the best we can get given the economic situation”.

The agreement means that the 20 staff taken on in September will have to serve a probationery period of 18 months to two years before they can go on the core workforce’s payscale and conditions. BFAWU have also brought an end to the zero hour contract and Streeter anticipates the agency workers will be absorbed into the permanent workforce as the core workforce ‘naturally’ diminishes as staff leave or retire.

Few agency staff belong to unions because of the nature of their employment but some have now joined BFAWU due to the union supporting their employment rights, bucking the national trend of a wider decline in union membership. While Streeter was dismayed that it will take so long for the agency staff to become permanent members of the  core workforce, he felt it was a victory for both the union members and most importantly the agency workers, who will be offered some protection and a future in the workforce.

Streeter was also pleased about the response he has had from within his union, saying “we had fantastic support including offers of financial help if we did go on strike.” He was less happy with the Labour Party, arguing that “only 21 Labour MPs supported our Early Day Motion and they are supposed to be socialists.” He had previously viewed the national minimum wage as one of the better achievements of New Labour but now questions the way it is becoming a wage level that employers are using  to undermine both negotiated pay levels and the actions of unions to protect their members’ standards of living.

And although he welcomed the legislation on agency workers he argues that flaws in the law remain: “It’s not progress if you still have people working at the same job but getting different rates of pay.”