Electricians from across the North West this week again took part in the latest nationally coordinated protests against plans by employers to reduce pay and worsen working conditions. For the second week in a row the building site for the new Carrington Paper Mill, operated by the construction firm Balfour Beatty, was picketed by around 50 workers, with many of those employed on site choosing to turn away rather than cross the picket line. Similar actions have taken place in Newcastle, Glasgow and London over the past fortnight. 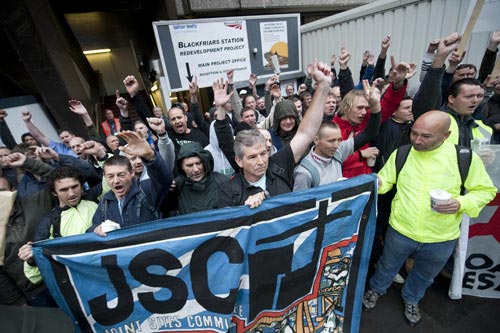 Sparks protestors at Blackfriars in London

The protests began following the announcement in May by Balfour Beatty and another seven of the UK’s 14 major electrical contractors (Crown House, NG Baileys, T. Clarkes, MJN Colston, Gratte Brothers, Shepherds Engineering, Matthew Hall) that they would impose new contracts upon their electricians, and in doing so scrapping the Joint Industry Board (JIB) agreement which has for the past 40 years been the basis for setting pay and working conditions. The firms have drawn up a replacement, the Building and Engineering Services National Agreement (BESNA), and issued notice to employees in August that their current contracts will be terminated on December 7, leaving them with the option of taking up the new contracts or accepting unemployment.

According to Unite, which represents UK electricians, BESNA will have a number of negative effects on the trade. Contractors will be able to continually raise and lower hourly pay according to specific tasks workers undertake at any point in time, rather than maintaining a standard wage for skilled work. For some electricians this will entail a lowering of the hourly rate from £16.25 to £10 – a 35 per cent pay cut.

Unite say that both travel and overtime pay will be cut and made payable only at the employer’s discretion, the ability to claim for unfair dismissal will be reduced, while employers will simultaneously be enabled to make redundancies while agency temp workers are still engaged on projects. As one electrician analysing the agreement put it: “People are going to be losing a lot. Every single term in BESNA gives all the power to the employer. They get final say on everything.”

The JIB agreement has been in place for over 40 years, and part of the reason for its creation was the avoidance of labour unrest. The prospect of its removal is now fuelling some of the most potent labour militancy of recent years.

Protests by rank and file union members have shut down building sites across the country. In September a group of around 1,500 electricians workers at the Lindsey oil refinery in Lincolnshire walked out to join demonstrating electricians and Unite officials, while sites in London have been blockaded and occupied by workers several times in recent weeks.

“We’ve got to have mass walkouts, whether it’s official or not, it’s our very futures at stake,” explained Steve Acheson, Branch secretary for Unite from Manchester.

He said in view of the fast-approaching December deadline, electricians “aren’t prepared to wait for the union to decide what they’re going to do. Time is not permitting. The rank and file are saying we haven’t got enough time and they’re taking action.”

Acheson, himself a victim of Balfour Beatty’s past union blacklisting activity, accused building firms of lacking commitment to negotiations with their workforces.

“They’re just moving the goalposts so they can get the rate down by £3. This is a 43 year agreement they’re walking away from. The root cause of everything is insatiable greed for greater profit.

“The only language these companies seem to understand is industrial action. There’s no dialogue, they don’t want dialogue.”

One of the original eight companies proposing to scrap the JIB, MJN Colston, has already backed down in response to the protests, and the workers are confident that others can be forced into the same decision.

Balfour Beatty, a firm with a recent history of illegal union blacklisting, is viewed as the driving force behind BESNA and as such is being targeted by Unite for the first wave of official strike action. The decision to ballot the 1,000 Unite members employed by Balfour Beatty was announced on October 18. While Balfour Beatty have claimed that the scrapping of the JIB is a response to competitive pressures, Unite point out that the companies orders have risen 6 per cent this year, with £15.5bn worth of projects underway since last year, yielding pre-tax profits of £50.5m. Ian Tyler, the company’s chief executive, received a total pay package of £979,994.

Unite national officer, Bernard McAulay said: “We believe Balfour Beatty is the main aggressor among a group of companies trying to bully their workers into signing away their livelihoods so Unite is balloting them first. We have warned them repeatedly that their greed will bring mayhem to an industry desperately trying to steer a path through the recession, but they refuse to listen.

“The failure of the senior management at Balfour Beatty to withdraw the threats of dismissal has left Unite with no choice than to prepare for an industrial action ballot with Balfour Beatty, the ring-leader of these break-away firms.

“This is a vastly profitable company. It has no need whatsoever to rob its employees in order to satisfy its shareholders. Perhaps the threat of strike action will bring Balfour Beatty to its senses and back to the negotiating table.” In Manchester, as well as the Carrington Paper Mill construction site run by Balfour Beatty, the other major target of protest has been the Town Hall refurbishment project. The contractor chosen for the project, NG Bailey, is one of the seven firms still seeking to implement BESNA. July’s Manchester People, the council’s news publication, quoted deputy leader Sue Murphy praising the project for its role in creating jobs and apprenticeships for local youngsters, saying as well as “preserving these heritage buildings for the future and ensuring they can deliver improved services in the years ahead, we are also helping give these people a promising future”.

This future now looks decidedly less promising for those hired by NG Bailey, which will, under the terms of BESNA, also no longer be offering specialist electricians’ apprenticeships.

Balfour Beatty were contacted for comment and supplied the following statement:

“Balfour Beatty Engineering Services (BBES) remain committed to the HVCA and the introduction of the Building Engineering Services National Agreement (BESNA) which will introduce one consistent set of terms and conditions for electrical, mechanical and plumbing operatives who are currently employed under a number of existing industry agreements.

“The UK construction industry is under pressure to increase efficiency, to improve productivity and to minimise costs. We are in the process of consulting with our workforce on the proposed introduction of the BESNA, this process includes providing the opportunity for our employees to ask questions to fully understand the detail and benefits of a single agreement for BBES and the industry as a whole.

“We believe that by implementing the new agreement we will create a more modern structure, better able to respond to the market place and to safeguard employment, without eroding the terms and conditions of our employees. No employee will have their wages cut, electricians will earn the same rate under the BESNA and mechanical and plumbing operatives will see an increase in their hourly rate to create a level playing field.”

A report on Manchester City Council’s reaction to the protests against NG Bailey will follow in the coming weeks.