Greater Manchester Police (GMP) have today erected a temporary “knife arch”, consisting of a metal detector and sniffer dogs, in Piccadilly Gardens for pedestrians to walk through. 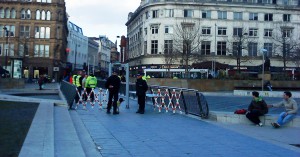 The arch is part of Operation Portcullis, which is supposedly aimed at encouraging responsible drinking in the city centre and clamping down on drink-fuelled violence. According to a GMP statement the operation “involves a range of agencies, such as Manchester City Council, Greater Manchester Public Health Network and British Transport Police.”

When MULE editor Siobhan McGuirk was walking through the area she noticed the police-surrounded detector and decided to avoid walking through it. Instead she walked past it as the barrier covered only the paved walkway and was only a few meters wide.

When she saw two young black men being stopped and searched nearby she returned to ask what was going on. She asked one of six officers standing by the decetor what was happening and whether people had to walk through the arch. The officer said, “No, but it might look suspicious if you tried to avoid it.” Ms McGuirk then told the officer that she had purposefully avoided the “safety arch”. The officer replied, “To be honest, you don’t fit the profile we’re looking for.”

We asked a GMP press officer why it might seem suspicious for anyone to want to avoid walking through a metal detector surrounded by uniformed police and have their crotch sniffed, on a public walkway. He responded that you didn’t have to “if you don’t want to go to the location”. The police are not “pulling people off the street”, he continued, and there is no law to make anyone subject themselves to the process. He went on to say that people “should have no objection to do it really, if they’ve got no weapons.” Ms McGuirk had chosen to walk around the “safety arch” because she thought “it looked ridiculous, and intimidating”.

When asked whether there was a profile of person they were looking for the press officer responded “no not really” and stressed that the ethnicity of the two men being searched nearby was “irrelevant”. Furthermore he warned that any implication otherwise would result in GMP coming down on MULE “like a tonne of bricks, put it that way.”