London’s oldest radical bookshop was damaged last February in a horrific suspected arson attack. Poets, authors and actors have responded with Poems for Freedom, a fundraising anthology containing contributions from artists around the world. 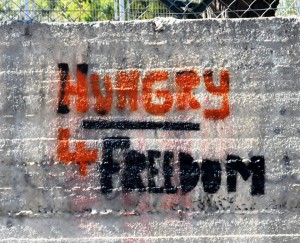 Freedom Press, a 127-year old anarchist publisher and bookshop, was left badly damaged in the attack two months ago when a window was smashed and accelerant poured into the shop in the early hours of Friday 1 February.

Founded in 1886 by a group of friends including Charlotte Wilson and Peter Kropotkin, the radical press has published work on anarchists, socialists and radicals such as William Blake, Emiliano Zapata and George Orwell.

In addition to the press, bookshop and Freedom Newspaper, the spaces also houses the offices of Corporate Watch, the Advisory Service for Squatters and the London Coalition Against Poverty. It has over a century’s worth of material and acts as an organising space and drop in centre for the local community and protest groups.

Many of the books, pamphlets and other stock on the ground floor of the shop suffered fire and water damage and the uninsured Press was left in serious financial distress. The assailant and motivation has never been identified– although the shop suffered a similar attack 20 years ago by the far-right neo-Nazi organisation Combat 18. 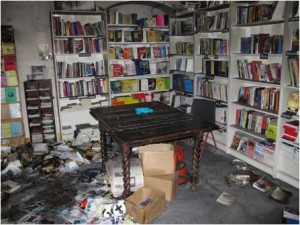 Damage after the attack

Well-wishers rallied behind the Press, with almost 100 people visiting the store the next day to help clean books and scrub the soot away. Artists are also pitching in through a fundraising anthology containing work by both established and up-and-coming poets and performers.

Editor Alex Clarke said, “It was via Mule on FB that I heard that Freedom Books, the oldest radical bookshop was firebombed in February and decided we should try to recover creatively by putting together a fundraising poetry anthology.” 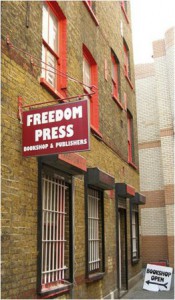 “With over 700 poems from around the world whittling them down was tough”, she said. But, she added, “The anthology is now compiled and ready to buy”.

Poet and contributor Steph Pike said, “I am an activist as well as a poet and think it is vital to support independent radical bookshops especially when they are under attack.

“For me this is also about freedom of speech and an attack on Freedom Books is an attack on all radical writers and artists, so producing an anthology of poetry is a very symbolic and important response. For me poetry, and this anthology, is a political act.”

To find out more about contributors, and buy the £9.99 anthology, click here

See here for more info on the campaign