Even some of the largest of the UK’s annual music festivals have decided to sidestep this year’s sporting attractions by taking a year off, but The Imploding Inevitable Festival will embark on its third year this weekend, bringing together some of the North West’s finest musicians and poets. Director and curator Baz Wilkinson describes previous years and what to expect this year.

Mule: Why did you begin the festival originally?

Baz Wilkinson: It seemed the next step up to celebrate a year of promoting the bands that we love. Not only that but it brings everyone together who love the bands, spoken word-ers and, well, we like to drag people from the mundane of everyday life and provide them with something that they can really enjoy and relax with.

Mule: Do you have a festival philosophy?

BW: I suppose our festival philosophy follows on from the philosophy that we have created for our regular events. It basically revolves around putting the artist first, keeping things as cheap as possible, which means being non-profit, and ensuring diversity across the weekend and nurturing creativity. For example, in the first year we had the audience contribute a line of poetry to a mass ‘Exquisite Corpse’ surreal poem and last year we had a very good open mic section. This year we are doing the open mic again but also offering woodworking classes and even a crocheting group haha! It’s all good fun…! 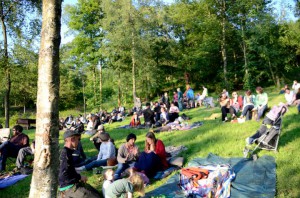 Mule: There seem to be ten festivals every weekend across the UK during the summer months these days; has it proved difficult with the competition? Why (not)?

BW: I think that’s always going to be a factor with these things. The only thing I can say from experience is that many of our ticket holders have been three years on the trot so we must be doing something right! Not only that, but the feedback we get each year has been superb and is great to read through after the event. I guess the most difficult thing is the weather; we’ve generally been lucky and had great weather but that’s always a wee bit of a worry. I’ve yet to try out my naked sun dance that I learnt when I was trekking in the hills of Wigan – maybe this year, it may catch on, who knows?! We could call it The II Festival With A Wink then ha!

Mule: What made you choose the setting of Fell Foot Wood?

BW: Five words: Area Of Outstanding Natural Beauty. That is all.

Mule: The festival remains very low key and independent; is that likely to change as the years go by? How big is it likely to grow?

BW: I’ve been asked this quite a bit which I like to think is because people can envisage it getting bigger, but for now we are quite happy with how it is. The atmosphere and vibes of the place has a really calming effect on the audience; it seems to put them at ease, forget their worries and have a great time! And, rest assured, if it did become bigger it would still remain true to its ethos in supporting locally sourced materials and food, being totally independent and supporting truly independent artists. 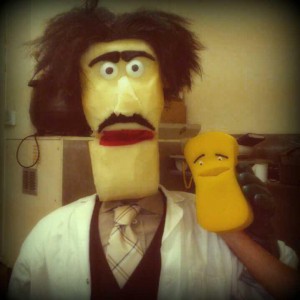 Mule: Has there been an Imploding Inevitable Festival performance or moment that is particularly memorable for you?

BW: There’s been quite a few actually! Paddy Steer being unleashed on a totally unsuspecting audience in 2010 was absolutely fantastic. He had a dancing robot (which was actually Men Diamler), lazers and loads of flashing lights – it looked like a UFO had landed. Earlier that day Men Diamler performed waltzing through the audience on the most beautiful of days I’ve seen at Fell Foot – again, that took the audience by surprise and they loved it! Last year, Magic Arm was the epitome of ‘aceness’, as were Driver Drive Faster. Regarding the poetry/spoken word, Mark Mace Smith put an incredibly gripping performance in showing his class yet again and I particularly love the diversity of that aspect of the festival each year. A truly memorable… memory was last year’s get-together after the bands had finished when we stayed up quite late laughing and drinking through the night with PICO (the comedy puppet act who will be at the festival again this year!) and some of the bands; I’ve never laughed so much I don’t think and those memories will stay a long time with me!

Mule: How do you select the line-ups?

BW: It’s a tricky affair as we’d love to book everyone but obviously we have to say sorry to quite a few. But let’s start at the beginning – we’ve always booked based on three main underpinning aims: integrity, creativity and originality. All the artists we promote have these by the bucket-load, so then it’s a case of seeing who’s free, looking at the logistics and seeing what will work, etc. And if we still can’t decide we put all the names of the bands we love down on the floor and our mascot, the nocturnal aye-aye (as in The II Festival), points to the ones he’d prefer. 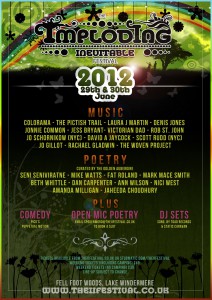 BW: We have another cracking line-up with Laura J Martin, Jonnie Common, Jess Bryant, Colorama, Denis Jones, Dave Rybka (Victorian Dad), Meursault (solo and a late addition), the eccentric and lovable Oddfellow & I, Harvey Lord, The Woven Project, David A Jaycock, Rob St John, two artists from Brooklyn, New York, in Jo Schornikow and Scott Rudd, Jo Gillot and not forgetting that Saturday morning we have a harp recital by Rachael Gladwin to wake people from their slumber. Alongside the music we have a superb selection of spoken word performers from comedy to story-telling to straight up poetry readings and then there’s the aforementioned Wood Craft and Crocheting circle to take part in. It’s going to be a cracker!

Tickets, including student discounts, are available from the site owner at Fell Foot Woods and you can avoid a booking fee by calling 01539 531014. There will also be an option to turn up on the day. For more info see the website and for ticket info follow this link.