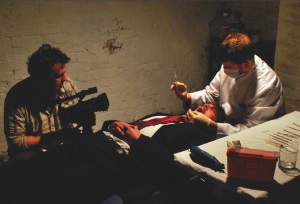 Their credo is simple: “Do well with nothing, do better with little and do it right now!” Siobhan McGuirk reports on the Manchester cell of an international movement.

“Money makes you stupid” declares Steve Balshaw, an organiser of Manchester Filmonik. “We’ve got a punk mentality: what can I make for zero pounds? We’ve been going since 2005 and the quality of local filmmaking has really improved over that time”.

Filmonik is the Manchester-based cell of an international movement known as “Kinofilm”. That name was already associated with a Manchester film festival, so the founders spelt it backwards. The first Kinofilm cell was formed in Canada, in 1999. A group of filmmakers surrounded by millennial doomsayers decided to “just go and make the movies they’d always wanted to make”.

Around the world, this broad “let’s go!” attitude has developed into various forms. In Manchester, Filmonik’s most regular activity is hosting “open mic” screenings, where anyone can take along their short movie, book it in, and have it shown on the big screen. There is no pre-screening process and everyone is free to give feedback. “It’s quite nerve wracking” says Steve, “you never know what’s coming – but we’ve not had anything too shocking as of yet!”

Their manifesto is unabashedly enthusiastic: “This is a place to try out new ideas; form unlikely creative collaborations; to network and discover like-minded talent. This is your chance to have fun with film and not get arrested for it.”

The only rules are logistical, covering run time and media format. Occasionally open mics are themed, encouraging filmmakers to experiment for special events. On Valentine’s Day this year, for example, films on “love, romance, relationships – and bloody gangland massacres” were screened. From slapstick comedy to observational documentary, anything goes.

Life is a Kabaret

It’s the other major Filmonik activity that really fulfils those punk credentials. Their Kabarets are intense, concept-to-shoot-to-screening, ten day filmmaking events; a kind of equipment and idea-sharing, collaborative bootcamp: “If you’ve always dreamed of making ‘that little movie’, if only you had the time / talent / equipment, now is your chance to watch that dream crash and burn. And see something else come stumbling from the ashes.”

Involvement is not limited to filmmakers. Script writers, actors, designers and people with a seedling of an idea are needed to get the process going. Participants meet up a week before the Kabaret to get into crews and make plans. For Steve, this openness is the real strength of the Kabarets. “It gives people licence to have fun with their ideas and push themselves to their limits to meet deadlines. For first timers it’s encouraging and supportive. There’s a lot of energy and it’s very exciting.”

Experienced professionals also take part and the equipment shared includes cameras, editing suites, studios and props. Additional kit is hired or loaned. For some, the biggest appeal of the Kabaret is the opportunity to try out a new piece of gear. For others, it is a chance to see if their script works on screen. Dave, an actor, does it to boost his showreel and meet directors. “This year I gave up a week’s work for the Kabaret. It was an easy choice: I was in two long and three short films and co-wrote a script. It’s like six months work in ten days!”

All participants – regardless of experience – pay £20 to cover costs with audiences at the three public Kabaret screenings also contributing. At the mid-point screening in April, the output was suitably mixed. A pilot for a twentysomething sitcom was impressively made, if the jokes and acting a little weak. An ode to mac computers had the audience in stitches. An experimental film showed Manchester in a beautiful light. A few in-jokes went over most people’s heads. But as one audience member said, “it’s about the great films as much as the throw away 20 minute ideas – they’re all impressive in a way, because someone went and made it, just like that.”

As the screening comes to a close, some people stumble home, celebrating. Others head back to HQ to continue editing. It is an intense and intensely rewarding process. For Steve, we are all better for it:

“From the outside, it might look like a closed club, but that comes out of bonding in an intensive, creative atmosphere, and anyone can join in. You become mates, then collaborators. Local filmmakers realise there’s this massive amateur community and, ultimately, sharing all our ideas makes our films better.”

Filmonik “open mic” screenings take place at The Deaf Institute every other month.

This article features in the print edition of The Mule – Issue 10, out now for FREE around Greater Manchester